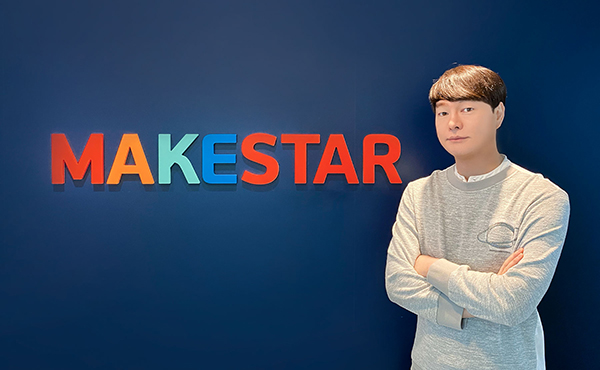 Makestar operates a crowdfunding platform that produces and distributes K-pop content. The platform allows fans all over the world to take part in the production of K-pop content to give them fun and some benefits as well. We launched the service in 2016.

Currently, the global platform is accessed by users from 230 countries around the world and payment is made in 120 countries. Our staff members have a deep understanding of K-pop, content production companies and agencies, and K-pop fans the world over. In cooperation with those companies and agencies, we plan, introduce and sell various goods and services that would appeal to global fans. In fact, we started posting global sales on the very first day of launching the service. We’ll continue to develop our expertise to grow into a leading global platform provider.

Kim was one of the founding members of FNC Entertainment, which is home to famous K-pop artists such as F.T. Island, CNBLUE and AOA. Having worked in the K-pop industry for more than 15 years, he set up Makestar to take the lead in globalizing K-pop in a different way.

Makestar introduced a sort of “go-between” platform in the K-pop industry. A delivery platform connects restaurants with consumers, and a car-sharing platform links drivers with passengers. Similarly, Makestar connects K-pop fans, through crowdfunding projects, with entertainment agencies that nurture and manage K-pop artists.

If a project of producing a photo book of an artist starts, for example, global fans who are interested in the project provide a certain amount of funds. When a target amount of money is raised in a set period of time, the photo book is created and it will be delivered to the fans who participated in the funding campaign. In this way, fans can have the photo book of their favorite star. Through Makestar, K-pop fans become an investor and producer, not a simple content consumer.

These days, many consumers actively take part in the production process, as evidenced in the word, “prosumer,” blurring the boundary between producers and consumers. I thought that it would be great for the entertainment industry to allow music fans to join the content production process, directly or indirectly.

Fans had already been participating in various programs to support artists. Makestar created a global platform to connect K-pop content providers with fans. Using the platform, artists have a chance to promote their global presence and earn profit, while fans can enjoy a new and fun experience.

Makestar is holding a variety of events to help worldwide fans consume K-pop content in a more interesting and amusing way. If fans purchase a new album of their favorite K-pop star, for instance, Makestar provides them with an opportunity to enjoy a video call with that star through a lottery. The company also presents unreleased photo cards of artists to fans and delivers Polaroid pictures containing the stars’ autographs to the fans.

Events like these are drawing an enthusiastic response from fans outside Korea, who find it difficult to meet K-pop stars. More than 70 percent of Makestar’s sales actually come from foreign markets such as the U.S., Europe, Japan and China. 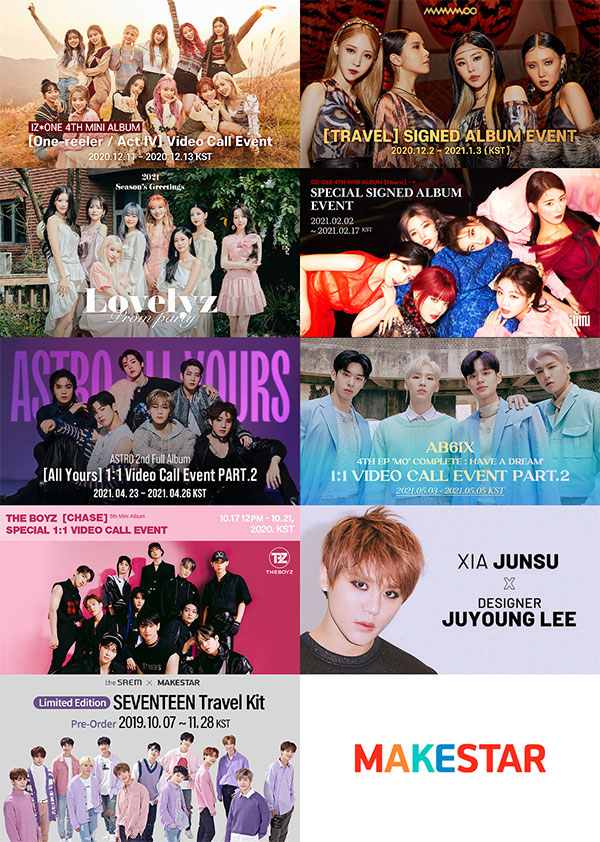 We’ve carried out more than 500 projects with some 250 entertainment agencies including CJ, Cube and RBW. Makestar has secured data about fandoms of 6,000 artists and their potential influence. Through our own system, we analyze social media platforms such as Twitter and Instagram to measure the size of the fandoms and predict the demand for and result of our projects. We provide the data to entertainment agencies after projects are done. Makestar has its own delivery center to help fans around the world receive goods quickly without any problem. The company also runs a global CS team to respond swiftly to various needs of fans in the entire world.

Makestar uses information technology when cultivating artists and conducting projects. This clearly differentiates the company from other entertainment agencies and fundraising sites. Makestar collects and analyzes data about global fans through its own system to forecast their potential reaction and examine the possibility of the global success of an artist even before his or her debut.

Based on the data, the company may map out plans about overseas performances of K-pop stars more efficiently and nurture promising stars in a strategic way.

The global popularity of Korean pop culture, known as the Korean Wave or hallyu, continues to rise. First, hallyu started with Korean TV series including “Winter Sonata.” Later, it revolved around K-pop music and then moved on to TV dramas again such as “Descendants of the Sun” and “My Love from the Star.” More recently, the hugely popular K-pop band BTS and the Oscar-winning film “Parasite” lead the hallyu boom. Hallyu continues to evolve, renewing itself. I imagine it will grow even further globally.

We’ve carried out many projects about relatively unknown artists, rather than high-profile stars or groups. Although the artists were not very popular in Korea, fans from more than 50 different countries participated in the projects. As a result, our sales proved to be five to ten times greater than our initial goals. For me, those projects are more memorable than those about popular stars. We’ll continue to offer similar projects down the road.

While the COVID-19 pandemic has dealt a serious blow to many economic areas, Makestar saw its sales increase considerably last year. That’s partly because its business is conducted online and most fans using the service live outside Korea. But more importantly, the company was able to cope with the changing environment promptly and effectively. It switched offline events like fan meetings into online ones in collaboration with entertainment agencies. Its own delivery system has enabled foreign fans to receive hallyu-related goods quickly and conveniently.

Makestar is not afraid of changes and innovation. It is dreaming of operating an entertainment platform that will take the initiative in raising the global status of hallyu.

We hope to grow into a leading platform operator, like Amazon, in the hallyu fandom market so our platform will be sought after by hallyu fans all over the world. Hallyu fans are greatly interested in not only goods and services related to their favorite stars but Korean culture and products overall. Our envisioned platform will provide everything about hallyu, including K-beauty and K-fashion products as well as K-pop content and related goods. This is our ultimate goal.

Makestar is expanding its scope from K-pop into dramas, films and entertainment. On top of quantitative growth, it also pursues qualitative growth through collaboration with K-beauty and K-fashion products. The company will surely be able to take a big leap forward in its quest to lead the lasting international success of hallyu.