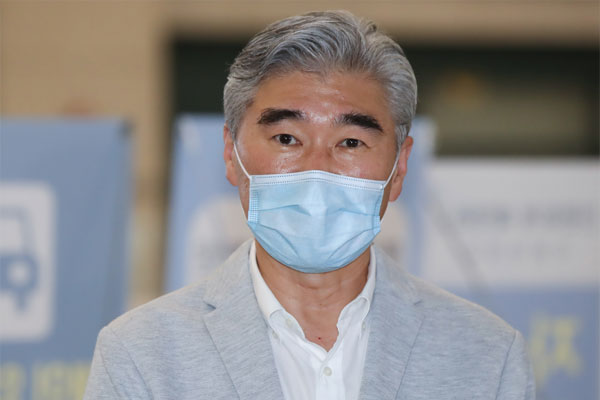 U.S. Special Representative for North Korea Sung Kim visited South Korea for four days from August 21. It was his second visit in two months. Kim said that his Seoul visit shows Washington’s commitment to maintaining close cooperation with the South Korean government in all issues related to North Korea. In an interview with KBS, he stressed that the U.S. has no hostile intent toward the North and there is no reason to worry about the combined military exercises between South Korea and the U.S. Here is political commentator Lee Jong-hoon with more.

It seems that the U.S. nuclear envoy’s visit to South Korea has much to do with the allies’ joint military exercises, which North Korea protests severely.

Being wary of the possibility of North Korea’s provocations, the U.S. probably felt the need to manage the situation properly. I think that’s why Sung Kim emphasized that the military exercises are purely defensive and also implied that the U.S. is hoping for dialogue.

During a meeting between nuclear envoys of South Korea and the U.S. on Monday, the two countries discussed ways to cooperate for pragmatic progress in complete denuclearization of the Korean Peninsula and the establishment of lasting peace in the region. Commentator Lee explains what the two sides discussed in other areas.

Simply put, the Biden administration seeks to resolve problems through dialogue. On top of this message, it also tells North Korea not to launch provocations since the South Korea-U.S. military exercises are defensive in nature.

Russia’s Deputy Foreign Minister and top nuclear envoy Igor Morgulov also visited South Korea on August 21, when Sung Kim arrived in Seoul. During a meeting between nuclear envoys of South Korea and Russia on Tuesday, the two sides exchanged views on regional diplomacy overall and discussed how to cooperate for complete denuclearization of the Korean Peninsula. It is rather unusual that chief nuclear negotiators from the U.S. and Russia visited South Korea at the same time.

While top nuclear envoys from the U.S. and Russia visited South Korea simultaneously, the three countries did not hold a trilateral meeting. It reflects that the officials of the U.S. and Russia came to South Korea for different purposes. I guess the Moscow government needed to figure out what’s going on before North Korea-U.S. dialogue resumes. Along with China, Russia has recently stressed the need for six-party nuclear talks. It may have wanted to prepare for a multilateral dialogue frame in advance. It is known that the three-way talks among the U.S., South Korea and Russia did not take place in Seoul because of Russia’s rejection. It appears that Russia didn’t want to pressure North Korea by acting as if it was supporting the South Korea-U.S. alliance.

Kim Yo-jong plays bad cop, criticizing the South Korea-U.S. military exercises and urging the two countries to halt them. In contrast, leader Kim Jong-un is building up an image of a good-hearted leader by visiting economy-related sites and comforting local citizens suffering from difficulties. His recent inspection of the housing construction site can be understood in this context. It also sent a meaningful message to the outside world. He focused on domestic affairs, rather than making nuclear or missile provocations during the period of the South Korea-U.S. military exercises. That is, the North Korean leader showed his commitment to keeping momentum for dialogue alive.

Outside the Korean Peninsula, China and Russia held their joint military exercises from August 9 through 13.

The large-scale exercises involved more than 10-thousand troops as well as various military planes, artillery pieces and armored vehicles. China explained that the purpose of the exercises was to safeguard regional security and respond to terrorist threats effectively. But attention turns to China’s true intentions behind the exercises, which coincided with the South Korea-U.S. military exercises.

For China, the South Korea-U.S. military exercises are no longer somebody else’s business. Amid escalating military tension between the U.S. and China around the Taiwan Strait, China seems to be demonstrating its military presence by drawing Russia. Notably, China and Russia established the joint command for the military exercises, pairing their groups together in mixed units. This is very similar to South Korea-U.S. exercises. I suspect China is considering creating something similar to the military alliance involving South Korea, the U.S. and Japan. Both the U.S. and China are mustering their respective allies and bringing them together under the military alliance in a show of force.

At present, the U.S. demands that North Korea engage in unconditional dialogue, while the North sticks to its position that Washington should ease sanctions against the North and drop its hostile policy toward Pyongyang. With the two sides in a fierce standoff, attention is drawn to how the recent Seoul visit by the U.S. nuclear envoy may influence regional diplomacy.

Many experts predict that North Korea-U.S. dialogue may resume in the not-too-distant future. There are preconditions, though. North Korea should agree to some conciliatory measures that South Korea and the U.S. are preparing. Seoul and Washington recently discussed humanitarian aid for the North. But if North Korea responds negatively to the offer, North Korea-U.S. dialogue could be delayed further. Kim Jong-un probably believes that his country should gain the upper hand from the start of the negotiations.

North Korea must be thinking hard about what negotiations card it will play, other than provocations.

The U.S. government is reportedly preparing for a phased solution to the nuclear issue and it also has to choose its first negotiation card, which could be humanitarian aid. But South Korea and the U.S. have differing views even on this part. While South Korea considers bold assistance and partial sanctions relief, the U.S. doesn’t want to go as far as to ease sanctions against the North. The Seoul government is trying hard to find some momentum to break the deadlock between the North and the U.S., but it is challenging to play a mediating role properly.

To ease a diplomatic standoff between North Korea and the U.S. and take a step toward a positive change, the South Korean government’s role is absolutely important. It has to play multiple roles, including offering various strategic options aimed at facilitating North Korea-U.S. dialogue and eliciting cooperation from involved countries.