Goorm, a Developer of Cloud-based IDE 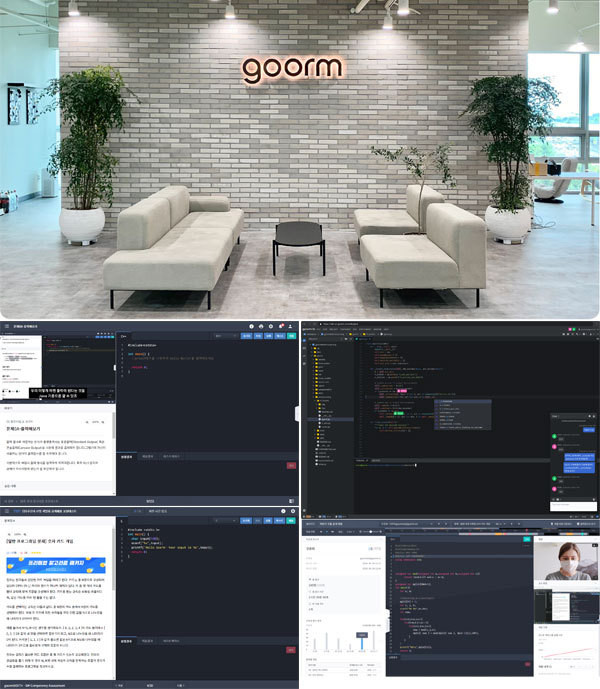 The startup we’re going to introduce today is Goorm, a developer of a cloud-based platform that provides programmers with a comprehensive set of tools for software development. Let’s hear from company CEO Ryu Sung-tae.

Goorm has a vision of creating a developer-oriented ecosystem where everyone can become a developer. It provides services for software development, programming education and developers’ ability evaluation. One of the services helps individuals and companies use software development tools anytime, anywhere, as long as they have a web browser.

As a cloud-based service provider, we named the company “goorm,” meaning “cloud” in Korean. Many global software firms are based in North America. The company name indicates our hope to become an influential software developer in Korea and promote the company with a Korean name overseas.

While studying at a graduate school, Ryu worked as a freelance programmer. He always thought that it would be nice to be able to develop software anytime, anywhere, without having to install expensive programs. For programming, it was necessary to install many programs to build an integrated development environment or IDE, which is a collection of tools for software development in a single product. The hassles were regarded as a stumbling block standing in the way of software development. Ryu found a solution in cloud computing. Cloud storage allows users to save files or data in central computer systems, not computer hard drives, and provides the users with access to them through the Internet. Through a cloud-based system, users can develop software with no restrictions on time and place.

Ryu found that relevant services had been launched overseas. He started his business in a hurry and provided a cloud-based web development environment, the first of its kind in Korea. That’s how goorm’s signature service, “goormIDE,” was created.

GoormIDE is a cloud-based IDE that allows users to develop software with just a browser, regardless of time and place. In the past, it was necessary to install applications such as Outlook and Thunderbird on laptops to check emails. But these days, people can read and send emails by simply accessing online email services like Gmail or Naver Mail in a web browser. It is simple example of Software as a Service or SaaS. Likewise, our service moved software development tools to the web so users can develop software on the cloud directly. Simply put, goormIDE is a web-based cloud programming tool.

Goorm’s another service “goormEDU,” provides AI and software education content. Anyone hoping to become a developer can listen to lectures and practice programming using this platform. It allows users to share their knowledge and experience about AI and software with each other. The platform is now widely used in startups, small and large companies as well as elementary, middle and high schools and universities nationwide.

GoormDEVTH is one of the company’s three representative services, along with goormIDE and goormEDU. Moving beyond the realm of education, goormDEVTH evaluates skills of software developers.

It costs a lot to build a physical environment needed to hire programmers. For example, companies need to rent a space to conduct a test for applicants, install PCs or notebooks and mark the exam.

But using our goormDEVTH service, all applicants can easily access the test at home, solve the same problems on the same conditions and see their test graded in the same way. So, they can find their test results quickly and fairly.

The platform is cost-effective as well. LG Electronics seems to have evaluated the skills of its software developers for about six years. The company uses our service to assess the coding skills of its engineers regularly and hire new employees. Some 100 firms including Kakao Enterprise, NHN, Toss, Shinhan Bank and Industrial Bank of Korea are conducting coding tests using our platform.

GoormDEVTH shines even more brightly under the pandemic-led non-face-to-face environment. Schools and companies have offered classes and evaluations online, but the inadequate preparation for the rapid shift to the contact-free environment has often resulted in cheating incidents. GoormDEVTH’s new supervisory feature minimized blind spots in supervision to create a fairer assessment environment.

To sum up, goorm has created a convenient environment for software development, provided anyone interested in software development with easier access to relevant education and built a fair evaluation platform. On the back of its business performance and investment, the company has gained recognition for its value and growth potential.

Our sales and the number of our customers have nearly doubled each year. We continue to attract investment as well. We’ve partnered with Kakao, which is exploring a cloud service and B2B projects. We’ve recently signed an MOU with the Korean mobile platform giant. We received a commendation from the Minister of Science and ICT in June, which is the Month of Information Culture in Korea, for our contribution to software development and a developer-focused ecosystem in the country. With goormIDE, in particular, we’re working hard to promote the pride of Korean SaaS.

We continue to produce positive results in this area.

Goorm’s next goal is to tap into the global market. The Korean word for the company name, goorm, contains its hope to promote Korea’s excellent software technology the world over. Users of goorm services in the entire world will learn that goorm means “cloud” in Korean.

The COVID-19 pandemic proved to be both a crisis and an opportunity for the company. Cancellations of events hurt its local business to some extent, but the number of overseas users has increased sharply, with users of goormIDE in the U.S. jumping nearly ten-fold in the pandemic. Goorm’s ultimate goal is to expand and solidify the basis of Korea’s software ecosystem.

As a matter of fact, cloud computing has already taken root in everyday life, leading the IT trend. Our goal is to build an ecosystem that provides effective tools to utilize cloud computing skills and enhances the capabilities of developers. I believe our efforts will contribute to nurture competent developers or talented individuals with computational thinking and eventually help boost national competitiveness. Our service allows learners to receive software education in the same environment, using relatively low-priced notebooks or tablet PCs, so it can bridge the regional gap in education and the income cap.

It looks like software developers have a promising future. But individuals do not really know how to become developers. Companies, for their part, need software developers to explore future growth engines. But they don’t know how to foster the relevant personnel. Meeting the demand of both sides, goorm’s services cultivate individuals as skilled developers and help companies and the state secure talented workforce. Thanks to this company, fundamentals of Korea’s IT industry are getting stronger.