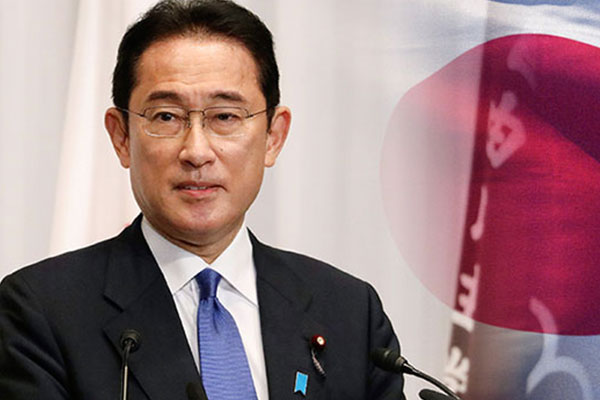 President Moon Jae-in on Monday sent a congratulatory letter to Japanese Prime Minister Fumio Kishida on his election by the Diet to the post.

Presidential spokesperson Park Kyung-mee said in a press briefing that in the letter, President Moon proposed that Kishida and he work together toward forging future-oriented relations between Seoul and Tokyo.

Moon reportedly hoped that the two countries will set an example for cooperation as neighboring countries and as they share basic values in democracy and principles of market economy.

The top office said that South Korea is ready to communicate with Japan's new Cabinet, voicing hope that the two sides will work together and resolve regional and global issues including the pandemic and climate change.

President Moon also sent a letter to outgoing Japanese Prime Minister Yoshihide Suga, calling for continued effort to improve relations between the two nations, even after his resignation.

Kishida has repeated his predecessor’s stance on Seoul-Tokyo relations in his first parliamentary speech since taking office this month.

Speaking before the Diet on Friday afternoon, Kishida called South Korea “an important neighbor.” But the former foreign minister was quick to add that he will strongly demand an appropriate response from Seoul in order for bilateral relations to be restored, in line with Tokyo's consistent stance.

His comments are being viewed as in reference to long-standing historical issues of wartime forced labor and sex slavery, which Japan claims were resolved through a 1965 normalization treaty and a 2015 agreement.

The remarks are nearly identical to those given by former Prime Minister Yoshihide Suga when he urged South Korea to present solutions to issues of bilateral conflict during his Diet address in January.

In response to the speech, South Korea’s presidential office said Seoul looks forward to communicating and cooperating with Tokyo in pursuit of a future-oriented relationship.

A senior presidential office said the two countries will need to put their heads together to strengthen practical cooperation in every area. A senior official of the South Korean Foreign Ministry issued similar remarks.

The similarity of expressions used by Kishida to those used by his predecessor Suga, as well as the brevity of comments related to South Korea, are leading to speculation that significant changes in the neighboring states' relations is unlikely.