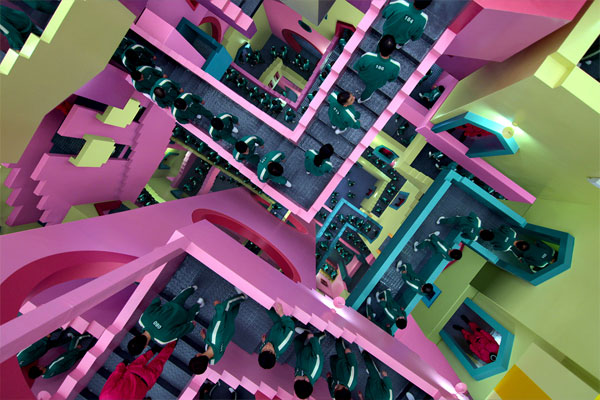 Korean drama series “Squid Game” topped daily charts on Netflix in all 83 countries where the company streams, including the U.S. and India, attracting 82 million viewers worldwide since its release on September 17. Outfits, snacks and games featured in the series are enjoying great popularity in the real world, with global fans uploading parodies on social media. Indeed, the Korean TV show is evolving into a cultural phenomenon.

Why are people worldwide so captivated by the survival drama, which brings to light social irregularities using Korean traditional games? Its breakout success has once again proved how competitive Korean cultural content is. But analysts say it has also revealed some tasks to contend with. Here is commentator Kim Heon-sik with more.

It’s no exaggeration to say that “Squid Game” has taken the world by storm. The survival games in the series consist of children’s games that many Koreans enjoyed when they were little, including red light/green light, cutting a shape out of an old-fashioned candy without breaking it, marbles and the very Squid Game. Young people the world over find these games interesting and unique. According to U.S. entertainment industry magazine Variety, “Squid Game” shows the unique sensibilities of Koreans and the universal emotions of people around the world at the same time. It also sheds light on polarization. Some popular elements shown in Oscar-winning Korean film “Parasite” are also found “Squid Game.”

Attention turns to the potential economic effects of this hugely popular drama. A Korean drama that has achieved global success is expected to generate the effect worth billions of US dollars. The 2016 Korean TV series “Descendants of the Sun” are estimated to have created more than 2.5 billion dollars worth of economic effects.

A popular drama enables its production company to earn profit, of course, and helps actors and actresses in the drama gain recognition. Products shown in the drama also become popular, while its shooting locations may turn into tourist attractions. Outfits and food items that appear in “Squid Game” have already gone viral in various parts of the world.

Ahead of Halloween, the players’ green tracksuits as well as masks and pink uniforms worn by the guards in the drama are selling well. Global fans are highly interested in dalgona(달고나), a Korean toffee snack featured in the drama, and a dalgona kit is sold for around 26 US dollars. Korea’s instant noodles, ramyeon, is well known worldwide. Most people think that it is eaten after being boiled. But in “Squid Game,” some characters eat uncooked ramyeon broken into pieces while drinking Korean distilled rice liquor “soju.” So many viewers discovered a new way of eating instant ramyeon. The drama seems to be creating another K-food sensation, just as a combination of two ramyeon brands called “jjapaguri”(짜파구리) shown in the film “Parasite” became a hit.

The popularity of “Squid Game” is also evidenced in search words. Viewers all around the world are wondering how much the 45.6 billion won prize money in the drama is in their own currencies. It is roughly about 38.1 million US dollars, 33 million euros, 4.3 billion Japanese yen, 246 million Chinese yuan, 2.8 billion Indian rupee and 868 billion Vietnamese dong.

It is simply amazing that K-pop represented by BTS, director Bong Joon-ho’s Academy-winning film “Parasite” and now the Korean series “Squid Game” have swept the entire world. Why has K-content fascinated the people the world over?

I think Koreans’ ability to react swiftly to something lies behind the power of K-content. Also, Korea is a digital powerhouse capable of sharing knowledge and information in real time and re-organizing them. Koreans are quick on their feet when figuring out what kinds of content are appealing to people worldwide, obtaining relevant information and producing content to be shared by the entire world. Koreans are also willing to embrace Western culture, while expressing emotions unique to Asia in a good way. Korean content features many elements that are not found in Western countries. In other words, Koreans are very quick at planning, producing and distributing content in line with global trends, while covering the full spectrum of Western and Eastern feelings. These factors make Korean content hold an unchallenged position in the field of entertainment.

Netflix is the biggest beneficiary of the success of “Squid Game,” as expected. The world’s largest over-the-top or OTT service platform has attracted new subscribers and seen its stock prices soar. “Squid Game” has driven Netflix stock to an all-time high, with its market capitalization increasing by some 10 billion dollars over the two weeks since the release of the series.

Despite the phenomenal success of the drama, it’s a shame that there is no extra profit for domestic producers, as Netflix monopolizes the copyright and additional profit. There are other controversies surrounding Netflix.

Netflix is connected to the Internet network through Korean Internet service provider SK Broadband, which has sued Netflix to pay for costs from surging network traffic. Netflix has never paid for network usage so far, although it has earned massive profit in Korea. Domestic firms complain of “reverse discrimination,” as they pay for the cost of using the network. During the recent National Assembly’s audit in Korea, Netflix was also criticized for evading taxes by lowering its operating profit and transferring 77 percent of its sales in Korea to its overseas headquarters as a commission.

Nevertheless, Netflix is the most favored streaming service among Korean content creators. It has more than 200 million subscribers, and content producers can express whatever they want to say without having to worry about success or failure.

However, content creators’ heavy concentration on Netflix is feared to weaken the domestic content market. Home-grown OTT service providers such as Tving and Wavve should secure competitiveness. It is also necessary to devise measures to connect the potential of K-content with greater profit.

Local OTT service providers need to attract Korean producers by presenting them with better terms, compared to foreign streaming platforms including Netflix, in terms of the copyright and profit distribution.

About the popularity of K-content, much of the credit goes to its openness and endless interactions with global audiences. “Squid Game” once again shows that it is important for Korean content creators to continue to communicate with the people worldwide when producing content and share it in real time.

The global craze over “Squid Game” is likely to continue for some time. It has a very good chance of becoming Netflix’s biggest hit ever. Amid the COVID-19 pandemic, the global OTT market has grown significantly, with cultural content becoming increasingly influential. And Korea is leading this trend. K-content is emerging as the future growth engine for the Korean economy.