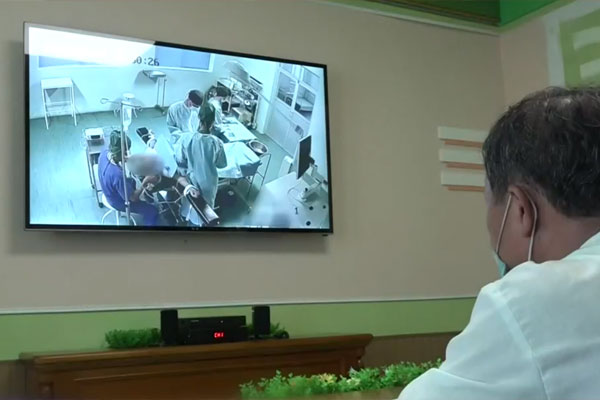 A medical system in a country is one of the most important elements that determine the overall standard of people’s lives in that country. North Korea claims that it established a systematic medical system based on law and provides free medical services to the people. But is that really the case? Today, we’ll learn about North Korea’s medical system from Kim Young Hui, senior researcher from the Korean Peninsula New Economy Center at the Korea Development Bank.

My father was a medical doctor. I remember he smelled of a disinfectant when he returned home from work. In North Korea, where transportation was not so well developed, doctors would walk long distances to visit patients for treatment. When I was little, medical treatment and medicines were all provided for free, so people didn’t really worry about money. But things changed a lot after the Arduous March, with the previous medical system collapsing.

Regarding healthcare, North Korea stresses free medical treatment, the section doctor system, where one doctor is in charge of a certain number of households in a region, and the traditional Korean medicine known as Koryo medicine in the North.

Among them, free medical care is what North Korea is most proud of. North Korea’s Public Health Act states that the country provides the complete, universal free healthcare system. Under the system, 1 percent of monthly pay is withheld from paychecks in the name of social insurance, while medical examinations, prescriptions, surgery and medicines are all paid by the state. Introduced in the early 1950s, the system was fully implemented in the 1960s. However, it began to reveal its limitations in the Arduous March period in the 1990s.

When North Korea was hit hard by the extreme economic contraction in the 1990s, many factories and enterprises were unable to pay tax, resulting in a drastic fall in state funds. Local hospitals also suffered difficulties, with many of them forced to close, as the state couldn’t even provide basic medical supplies such as antibiotics, glucose and saline solution. When individuals went to hospitals, they only got prescriptions there and had to buy the prescribed medicines at the market.

Since North Korea enforced economic reform in July 2002, patients have been charged for some medical services in part, although the country still claims that it offers free healthcare. For example, patients are given a certain amount of antibiotics, but they have to obtain additional ones, if necessary, on their own.

After the Arduous March in the 1990s, the section doctor system, which North Korea praises as a superior public health management system, also existed in name only.

In North Korea, hot springs are more than just soaking in warm water. When I was in North Korea, I saw a woman who had trouble getting pregnant. One day, she went to a hot spring. To my surprise, she became pregnant six months later. Some people choose to go to hot springs for treatment when they have skin problems or stomach aches. Indeed, hot springs are considered sort of paramedical facilities in the North. Under current leader Kim Jong-un’s rule, a hot spring resort area was built in Yangdok. The natural hot water there is believed to be good for chronic gastritis, gout, chronic eczema, impetigo as well as stomach and skin diseases. A hospital was set up near the hot spring area to treat patients.

In South Korea, one can call 119 in the event of any emergency. An emergency patient is transported to a nearby hospital in an ambulance with medical staff on board. In North Korea, patients themselves are supposed to contact a hospital, and there are not enough ambulances.

There is no emergency care system In North Korea. After I came to South Korea, I fell and suffered a fracture in my wrist. I called 119 for the first time. An ambulance arrived within ten minutes and transported me to the emergency room at the nearest hospital. Amazingly, my pain was relieved quickly.

In North Korea, when a person gets sick suddenly, he may use his own car to go to a hospital. But that’s the case for rich people. In general, a patient tells his neighbor that he is sick, and the neighbor runs to a local clinic. A doctor in charge of the region then visits the patient. If the doctor can’t handle the situation, he returns to the clinic and asks the clinic to transport the patient. The whole process takes time, of course. I guess the situation has improved these days, because many North Koreans now have cell phones. But the medical infrastructure is still very poor in remote areas and farming villages.

It may appear that North Korea arranged a systematic healthcare system based on law. In reality, however, medical facilities and supplies are absolutely inadequate. Moreover, free healthcare services that North Korea highly praises are applied only to high officials. Medical services for general citizens vary widely, depending on their social positions and economic levels.

The Bonghwa Clinic in Pyongyang is well equipped with the emergency room, treatment rooms, operating rooms and labs. Its medical staff graduated from prestigious local schools or studied abroad. Unlike many other hospitals in the country, rooms there are all equipped with air-conditioning and heating facilities, with an adequate supply of hot water. The clinic has advanced medical equipment and imported medicines as well. Food is great and power outages never happen. This is only natural, considering that the top leader is treated there.

In the North, there are hospitals for the general public, while some hospitals only serve the privileged class, indicating inequality in healthcare. Also, good hospitals are all located in Pyongyang. Those living in local provinces need to get a travel certificate if they want to go to a hospital in the capital. But it’s pretty difficult to get the certificate. There are large disparities in medical care between Pyongyang citizens and residents in other regions, between those in power and those who have none.

Hospitals in local provinces in North Korea lag far behind those in Pyongyang in terms of the quality of medical equipment and services. For that reason, the country operates a remote treatment system, in which hospitals in the capital are connected with those in other regions through video. North Korea plans to expand the remote medical service, which the country calls the “long-distance service system.”

Doctors in Pyongyang watch other doctors in local regions treat patients through video and give advice. That is, doctors in different regions work together to treat patients through this long-distance service system. The system helps doctors reduce mistakes and ensures better, free medical care for patients in local provinces. Skilled doctors using advanced medical equipment in Pyongyang give remote assistance to doctors in local regions, so this system is helpful for patients there, of course, while doctors in remote regions can also learn more and improve their skills. Even so, I think it’s challenging for the country to resolve regional disparities in healthcare through this system alone.

There simply aren’t enough medical devices and basic medicines in North Korea, due to the country’s border closure policy in response to the COVID-19 pandemic. It is uncertain whether North Korea can restore its collapsed medical system through some alternative solutions like the remote medical treatment.