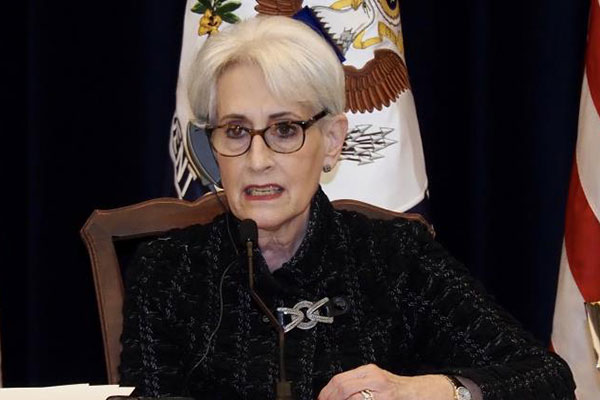 Sherman: US Satisfied with Consultations with S. Korea, Japan

U.S. Deputy Secretary of State Wendy Sherman said the United States is "very satisfied" with its consultations with South Korea and Japan on the best way to denuclearize the Korean Peninsula.

Sherman made the remarks on Wednesday in a press conference in Washington after a three-way meeting with her South Korean and Japanese counterparts, Choi Jong-kun and Takeo Mori.

The deputy secretary said that the three sides discussed their shared commitment to the complete denuclearization of the peninsula, and stressed that Washington does not harbor hostile intent toward North Korea. She said the U.S. believes that diplomacy and dialogue are essential to achieving the denuclearization goal and establishing permanent peace.

The senior officials of the three nations were originally scheduled to hold a joint press conference after the talks, but Choi and Mori did not attend.

Sherman said that a bilateral difference between South Korea and Japan that was unrelated to the meeting led to the change in the format of the press event.

Meanwhile, in a separate presser, South Korea’s First Vice Minister of Foreign Affairs Choi Jong-kun said the joint news conference did not take place after Japan conveyed its intent to back out, citing a recent visit by the head of the Korean National Police Agency to the Dokdo islets, which Tokyo claims as its own by the name of Takeshima.

Choi told reporters in Washington that Japan had conveyed the stance ahead of the three-way vice foreign ministers’ meeting.

Earlier on Tuesday, the police agency's Commissioner General visited Dokdo and Ulleung Island via helicopter for a routine inspection and to convey words of encouragement to officers guarding the easternmost islets.

Vice foreign ministers from South Korea and Japan nonetheless pressed ahead with their bilateral talks in Washington on Wednesday.

As it was the first high-level meeting between the two sides since the launch of the Fumio Kishida Cabinet earlier this month, the officials exchanged views on key bilateral issues and other items of mutual concern.