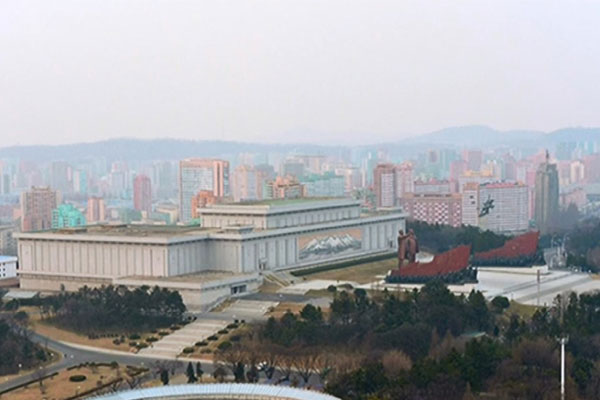 A museum is a place where relics and works of art from the past as well as relevant materials are stored and exhibited. What do museums mean in North Korea?

One of the two representative North Korean museums is the Korean Central History Museum, which exhibits historical relics ranging from the prehistoric age to modern times. The other is the Korean Revolution Museum with a collection of items related to the nation’s founder Kim Il-sung and revolutionary activities of people around him including his wife Kim Jong-suk.

Museums are used as a means of strengthening the ideological solidarity of the people in the North Korean regime, which highly values a perceived legitimacy.

North Korea is known to have about 300 museums and exhibition halls. The Korean Revolution Museum, among others, displays relics and materials about Kim Il-sung’s anti-Japanese revolutionary armed struggle, his guerilla army as well as those related to the activities of the country’s founder and his son Kim Jong-il. Items about current leader Kim Jong-un’s achievements have recently been added to the museum.

Major North Korean museums are concentrated on Kim Il-sung Square in the heart of Pyongyang to play the educational role in promoting socialist ideology among the public.

At the entrances of the museums, there are records about foreign leaders who have visited there. The museums have large halls in places, where visitors can listen to explanations about displayed artifacts. Visitors can also find many paintings about socialist realism and those praising Kim Il-sung.

In South Korea, museums display things in a way to serve the convenience of viewers. The North, in contrast, exhibits focus more on what the museum tries to show to the viewers, with their themes mostly dealing with revolution and ideology.

The first modern museum of Korea was the “Yi Royal Family Museum of Art,” which opened in 1908. At the time, it displayed Goryeo-era celadon, Buddhist sculptures, and paintings and potteries from the Joseon Dynasty.

North Korea probably had multiple reasons to use museums in the course of establishing its regime. In September 1945, North Korea’s founder Kim Il-sung visited some historical sites including the Ulmildae(을밀대) Pavilion in Pyongyang. He believed the historical structures would be very important in promoting his policy and ideology. In 1946, he enacted a new ordinance concerning cultural property preservation. North Korea unearthed relics at archeological and historical sites nationwide and drafted museum-related policies. Then, it opened the Hyangsan History Museum in North Pyongan Province, the Chongjin History Museum in North Hamgyong Province, the Hamhung Museum in South Hamgyong Province and the Sinuiju History Museum in Pyongan Province one after another.

While opening museums across the nation, North Korea planned on increasing the number of relics to be stored at the museums. In 1952, in the middle of the Korean War, the North set up the National Academy of Sciences for excavation and research of cultural artifacts. It also restructured the education system to train specialists in relic excavation. Interestingly, North Korea used historical sites as museums.

In the historical city of Gaeseong in 1952, North Korea set up the Goryeo Museum using the old building of Sungkyunkwan(성균관), the institute of Confucian learning in the Goryeo era. In March 1953, the North created a history museum in Wonsan, which is believed by some to be Kim Jong-un’s birthplace. In June 1954, North Korea also established a history museum in Kanggye, Jagang Province, by using the old government building from the Joseon era. In this way, North Korea turned historical sites themselves into museums.

After the Korean War, the Pyongyang Museum had a mere 25-hundred items because more than 150-thousand relics were destroyed during the war. North Korea restored the museum and reopened it in 1954. Now, it is known as the Korean Central History Museum located on Kim Il-sung Square.

North Korea excavated historical sites in the Pyongyang area and unearthed a large number of relics from ancient Korean kingdoms such as Gojoseon, Goguryeo, and Goryeo. At present, the three-story Korean Central History Museum has collections of over 150-thousand relics and artifacts.

Museums in North Korea have many historical objects from those kingdoms but contain a relatively small number of those from southern Korean kingdoms such as Baekje and Silla. The collections are exhibited in chronological order.

North Korea organized a committee dedicated to the establishment of the National Pyongyang Art Gallery in 1948. But during the war, the gallery was completely destroyed. After the war, in 1954, the North created the National Central Art Gallery. But there were just not enough collections. It has now been expanded as the Korean Art Gallery situated on Kim Il-sung Square. It is the country’s only art museum that collects and exhibits works of art overall, mostly paintings.

To increase its collections, the Korean Art Gallery purchased old paintings, celadon, and white porcelain from individuals. It also bought artifacts through the General Association of Korean Residents in Japan and collected others from abroad. The gallery secured items from the Joseon period to modern times in this way. For present-day works, it has collected and displayed paintings or sculptures that received prizes at national art exhibitions.

Following the collapse of the Soviet Union and the communist regimes in Eastern Europe in the 1990s, North Korea found itself isolated from the outside world. To make matters worse, it was hit hard by natural disasters and went through the painful period of economic difficulties known as the Arduous March.

To overcome the crisis, North Korean authorities put even greater emphasis on the juche or self-reliance ideology launched by Kim Il-sung. In the process, North Korea actively used historical relics.

To encourage the public to follow Kim Il-sung’s juche ideology, North Korea had to emphasize his historical legitimacy. That is, North Korea had to prove that the regime inherited the legacy of ancient Korean kingdoms. That’s why it discovered the tomb of Dangun, the legendary founder of the first Korean kingdom of Gojoseon and the tomb of King Dongmyeong of the Goguryeo Dynasty, while restoring the tomb of Wang Geon, the founding king of Goryeo.

In doing so, North Korea tried to demonstrate to the people that North Korea led by Kim Il-sung was the successor to those kingdoms. By highlighting the legitimacy of his ideology and the superiority of Korean people, the country sought to strengthen internal unity.

Kim Jong-un hopes to be recognized as the leader of a normal state and wants to promote North Korea’s cultural items globally. Goguryeo mural tombs were actually designated as World Cultural Heritage by UNESCO. North Korea believes it is relatively easier to have its non-material cultural heritage, such as traditional dances, songs, food and clothes, inscribed on the UNESCO World Heritage list. That’s why the Law on the Protection of Cultural Heritage expanded the range of preservation of cultural assets to non-material or intangible cultural heritage.

North Korean museums, just like those in other parts of the world, seem to play an important role in the excavation, research, preservation and use of cultural heritage. But there are slight differences between South and North Korea in terms of how to classify and designate cultural heritage and how to deal with cultural remains and relics. Analysts raise the need for inter-Korean exchanges and joint research in this area before the disparity widens.

South and North Korea once conducted brisk exchanges in museums and cultural relics because historical and cultural issues do not really involve political interests. Cultural assets, whether they are located in the North or in the South, are all precious heritages representing the legitimacy and independence of the Korean race. In this respective, inter-Korean exchanges in this field should be reinvigorated.

North Korea has many relics from ancient kingdoms such as Goguryeo, Balhae and Goryeo, since their capitals were located in the northern part of the Korean Peninsula. But it is hard to find cultural assets from southern kingdoms such as Baekje, Silla and Gaya in the North. Under inter-Korean cooperation programs, North Korea could bring the artifacts from the southern kingdoms from South Korea and display them at local museums, and vice versa. It is important to carry out cross-border cooperation in this area, in light of the long history shared by both Koreas.

Cultural relics preserved at North Korean museums are part of precious Korean history. Once they are damaged, it is difficult to restore them. It seems urgent for South and North Korea to facilitate bilateral exchanges, not only in cross-border exhibitions of museum artifacts but in advanced technology and expertise involving the preservation and exhibition of historical and cultural relics.