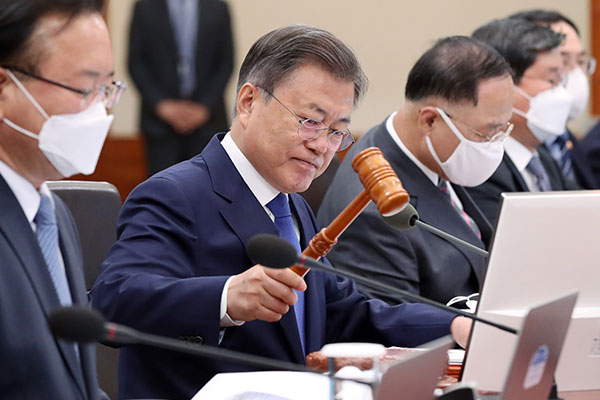 President Moon Jae-in has approved the promulgation of two controversial reform bills that are set to reduce the prosecution’s investigative powers.

In opening remarks at his final Cabinet meeting on Tuesday, Moon said the revisions to the Prosecutors' Office Act and the Criminal Procedure Act which have passed the National Assembly should be reviewed and approved within the current administration's term.

With the Cabinet's approval, the legislation is set to take effect in September.

The main opposition party had fiercely opposed the ruling Democratic Party's efforts to railroad the bills through parliament and called on the president to exercise his veto power.

With the revisions, the prosecution will be able to launch an investigation for only two types of crimes - those concerning corruption and the economy.

Prior to the revisions, prosecutors could launch probes into six types of serious crimes, including those related to public employees, elections, defense projects and large disasters. For the time being, the police will be investigating the four types of crimes that the prosecution will no longer be able to look into.

However, both police and prosecutors will be investigating election-related crimes until the end of the year given that the nation will hold local elections in June.

Also under the reform bills, individual prosecutors will not be able to prosecute a case for which they launched an investigation. Instead, they will hand over evidence collected from their probe to another prosecutor who will then decide whether or not to seek an indictment.