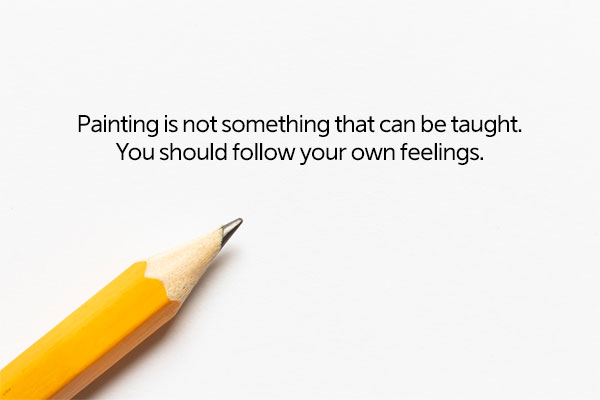 It is an orphanage where Chun-sik춘식 grew up. Having lost both his parents and his home during the Korean War, Chun-sik passed through several orphanages, from Jejudo Island to Busan, and then to this place near Seoul.

At first, he had no choice but to stay in the orphanage, but later he was forced to stay there after being caught begging and stealing stuff.

But he liked this orphanage because there was something different about this place from the ones he had lived.

It didn’t matter to Chun-sik that they fed and clothed you well, although they did do that, unlike other orphanages.

Mr. Hmm gave Chun-sik a sketchbook and a sketching pencil. Mr. Hmm, who used to paint only complicated pictures, started painting very easy and childish pictures, as if he was mimicking Chun-sik’s works.

“Mr. Hmm, teach me how to paint instead of just copying my drawings.”

“Hmm, me teach you how to paint? That’s preposterous. Of course, it is. Painting is not something that can be taught. You should follow your own feelings. That way, you can improve as you paint.”

Kang So-chun is a popular children’s author in Korea. He left about five hundred stories, poems and even songs for children. The reason his works are so important in children’s literature is that his stories comforted young children and adolescents in the years following the tragic Korean War. He was born in North Korea but risked his life to flee to South Korea. So, he knows very well about the pains of war. Because of his sufferings, he wrote many hopeful stories for children. In this story, Chun-sik is orphaned and suffers from anxiety attacks since losing his parents, which prevents him from settling down. Chun-sik reminds the author of his own self who had lost his family and normal life because of the war. Mr. Hmm, who cares for Chun-sik, represents the author who tried to comfort children through his works.

One day, Chun-sik and Mr. Hmm decided to paint a pine tree. Its branches grew only in one direction, precariously slanted, but it did look more like a pine tree toward the top. Mr. Hmm didn’t work on his own painting, fascinated more by that of Chun-sik. The boy was particularly focused on his work that day. Perhaps, he was encouraged by Mr. Hmm and his continuous “Hmm, hmm.”

How great it would be to have a father or an older brother like Mr. Hmm. He hugged me tight. I felt like I was reunited with my parents.