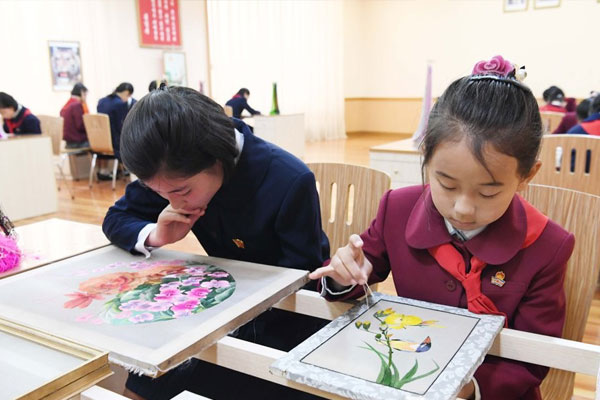 While planning a 2006 exhibition of traditional crafts between South and North Korea, Professor Jang visited North Korea and saw many embroidery pieces there. It is said that embroidery has special implications in the country and its level is significantly high.

Hand-stitched pieces of embroidery are pretty popular in North Korea. In the country where resources are not enough, people can create small artworks as long as they have a needle, threads and small pieces of cloth. Those who are good at needlework can even become artists.

In the late 19th century, embroidery works were ten times as expensive as paintings in Korea. In modern times, when Koreans learned Western art, embroidery was considered part of traditional handicrafts for creating bits and pieces, like a small pouch.

In North Korea, embroidery is held in high regard, as it is used for promoting the personality cult for its top leader. I thought it also played a role in strengthening internal unity.

Modern embroidery in North Korea was initiated by Kim Jong-suk, North Korean founder Kim Il-sung’s first wife and former leader Kim Jong-il’s mother. Born in Hoeryong, North Hamgyong Province in 1917, she is known to have joined an anti-Japanese guerrilla unit in 1935. She married Kim Il-sung in 1940 and died during childbirth in 1949. In the North, she is revered as a pioneer who reformed Korean embroidery in a modern way, both in form and content.

As a member of the Korean People’s Revolutionary Army, Kim Jong-suk made handkerchiefs, flags and scarves needed for soldiers along with other female members. The creations were mostly military supplies, so they put more weight on practicality than on artistic value. For instance, a small handkerchief she made in 1937 was simply embroidered with patterns of light pink azalea petals. Since Kim Il-sung praised azalea as the country’s important flower, the handkerchief named “Azalea of the Fatherland” has been regarded as a very important artwork.

After Korea’s liberation from Japanese colonial rule in 1945, Kim Jong-suk made several proposals to lay the groundwork for North Korean embroidery. In North Korea, flags embroidered with letters are considered important, as they are associated with propaganda and agitation. Kim produced various forms of flags, including a flag to be sent to the repair site of the Potong River in 1946, as well as military flags to be used by the Korean People’s Army. In 1947, she established the Embroidery Institute, the present-day Pyongyang Embroidery Institute, with the purpose of developing embroidery skills and helping women build their career in society and engage in economic activities.

In North Korea, women had to work, just like men, after sending their children to childcare centers or preschools. Women could earn money relatively easily through needlework. I think that’s one of the purposes of the embroidery institute. In the initial stage, the institute had a simple structure. There was one manager, one designer, about six embroiderers and a woodworker who made frames. But the number of staff increased gradually, with the number of embroiderers rising to 30.

The institute produced small items used in daily life and decorations in the early stage. Those who stood out in embroidery began to create works featuring the image of Kim Il-sung. In the process, the institute strengthened its position.

In the North, the top leader is called Number One, and his portrait is known as Portrait One. North Korea created some 14 embroidery works about Portrait One between 1968 and 1974.

When former leader Kim Il-sung visited construction sites, power stations or mines in the 1960s, workers there cheered and applauded. Artists would draw pictures of the scenes and send them to the embroidery institute, where embroidery specialists created artworks based on the paintings. In the 1970s, embroidery pieces about Portrait One began to describe the scenes of Kim Il-sung with children or the leader sitting in a garden and reading a newspaper, as he was recognized as the Supreme Leader and the Father of the Nation.

I traveled to North Korea in the early 2000s to prepare for an inter-Korean exhibition of traditional crafts. At the time, some 200 North Korean people, including high-level artists and junior high school students, worked together at the embroidery institute for the event. They embroidered letters on flags, stitched various patterns on small items and worked on more complicated ones.

In the North, women who learned embroidery skills were able to achieve economic independence and those who were trained at the embroidery institute could engage in relevant work across the country. I discovered that the institute created works based on paintings drawn by artists and mounted the artworks before selling them.

The Pyongyang Embroidery Institute has held a meeting for a joint review regularly to evaluate its works and improve their quality. While introducing various embroidery techniques and application methods, the institute began to put more emphasis on artistry, moving beyond the simple production of small daily items. Artists who belong to the institute produced good results at multiple exhibitions, including those in foreign countries. As a result, North Korea’s embroidery served as a channel to bring in foreign currency.

North Korean paintings boast a high level of realism. The same is true of its embroidery works. The country uses a variety of embroidery techniques. The craftsmanship is so meticulous and elaborate that dog hair in an embroidery piece looks as if it is blowing in the wind and a bird looks like it is moving. The embroidery works are even more realistic than photos.

In the 1960s, North Korean embroidery artworks won first or second prizes at competitions in Bulgaria, Romania and Czechoslovakia. Today, they are still recognized as top-notch products, as they can vividly describe famous world leaders.

One of the most famous artists who worked at the Pyongyang Embroidery Institute was Ri Won-in. She started her career as a teacher at the institute in 1954. She became the first female artist to earn the honorary title of “Merited Artist” in 1962. She also became the “People’s Artist” in 1982. Recognized for her excellent character description using various embroidery techniques, she produced a monumental work that portrays Kim Il-sung’s revolutionary activities. One of her signature works titled “Tiger” was created in 1965. It became all the more famous because the artist was in charge of the entire production process from design to embroidery.

Tigers shown in Korean folk paintings are cute and humorous, while the animal in Ri’s work is rather scary. The image was inspired by a real tiger in a zoo, staring at a passing bull, with a terrifying roar and with its eyes wide open. The image of the ferocious creature fits North Korea’s socialist realism. Ri’s “Tiger” provided new impetus to the local embroidery scene.

The level of the work is very high, in terms of embroidery techniques. The tiger looks so realistic and dynamic, adding a sense of dimension. The shiny silk threads delicately express the texture of the tiger fur, while the coarse red threads are used to depict an old tree. The lifelike design, harmonized with the vivid manifestation of the animal based on fine embroidery skills, raised North Korean embroidery to a higher level.

Meanwhile, the embroidery department of the Mansudae Art Studio also trains embroidery artists and produces works. The art studio was established in the late 1950s to build the Chollima Statue, which symbolizes the “Chollima movement” aimed at promoting rapid economic development. Chollima refers to a legendary winged horse. By the 1970s, the studio became a center of art production encompassing all areas including traditional ink wash painting, crafts, industrial art and embroidery. Afterwards, the art studio has focused on propaganda projects designed to build the party’s monolithic ideology system. Some specialists of the Pyongyang Embroidery Institute were transferred to the Mansudae Art Studio.

One of the major purposes of the Pyongyang Embroidery Institute was to train women in needlework and help them live on their own two feet financially. The top one percent of the institute’s members, including those who reached the level of People’s Artist, were moved to the Mansudae(만수대) Art Studio to join the project of creating embroidery works about Kim Il-sung and his juche ideology.

Experts agree that North Korean embroidery boasts a high level of techniques. But it is a shame that the country does not really show interest in the handicraft’s true nature but uses it for foreign currency earnings or ideology education instead.

Many North Korean embroidery works displayed at art fairs describe foreign children or cute dogs. Apparently, they are designed to appeal to foreign buyers, rather than to express personal feelings. That is, North Korea has foreign currency earnings in mind. For North Korea to create higher-level works or art that will last forever, I think the country needs to reflect some philosophical elements in its embroidery pieces.

Traditional Korean wrestling or “Ssireum” successfully made its way onto the UNESCO list of intangible cultural assets after a joint bid by the two Koreas. Similarly, we’re looking forward to their joint bid to inscribe embroidery on the UNESCO hertiage list.