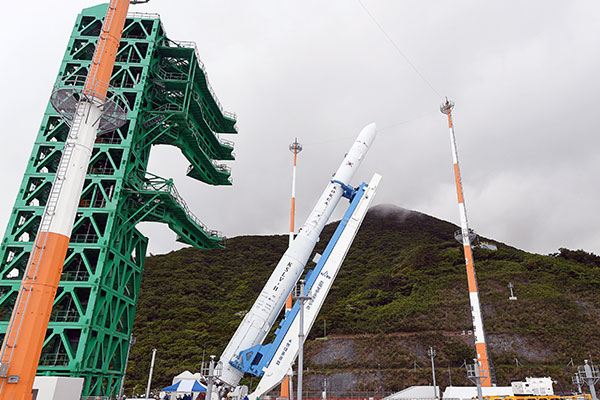 Preparations for the launch of Nuri space rocket, scheduled for Thursday, were suspended Wednesday.

In a press briefing on Wednesday afternoon, the Korea Aerospace Research Institute(KARI) said a sensor inside the oxidizer tank showed abnormal figures.

The KARI explained the rocket will be transported back to the assembly center for examination, as it is difficult to figure out the problem, with the rocket erected vertically on the launch pad.

As a result, the launch of Korean Space Launch Vehicle Two or Nuri will inevitably be delayed.

The institute said the launch management committee will have to finalize a schedule for liftoff again, after analyzing the cause of the technical glitch at the assembly center, remedying the problem and ensuring everything will be fine.

It added that it is uncertain how long it will take to address the problem, depending on what kind of problem it is and where the problem occurred.

The government later decided to launch the Nuri space rocket next week.

Kwon Hyun-joon, an official at the Science and ICT Ministry said on Friday that the ministry convened a meeting of the launch management committee, which gave the go-ahead for the launch on Tuesday. The launch window was set through June 23.

The official said the Korea Aerospace Research Institute solved the malfunction in a sensor inside the oxidizer tank by simply switching out the flawed component without separating the first and second stages of the rocket.

He added that the flawed sensor was replaced and engineers have verified that the new part was working properly.

The space rocket will reportedly be transported to the launch pad on Monday.