Top Diplomats of S. Korea, US: N. Korea's Nuke Test will be Met by Firm Response 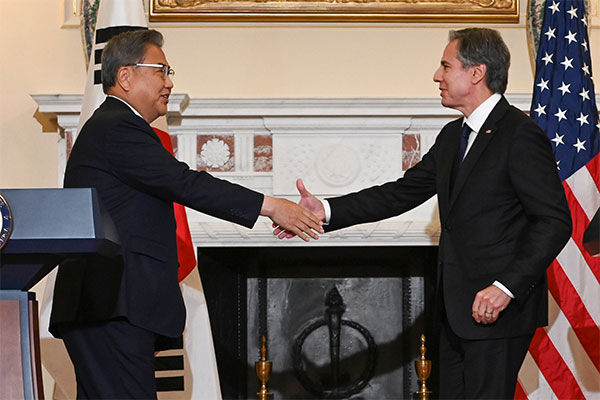 The top diplomats of South Korea and the United States have warned that North Korea will face a united and firm response if it conducts any provocations including a nuclear test.

Minister of Foreign Affairs Park Jin and U.S. Secretary of State Antony Blinken issued the warning on Monday after talks in Washington.

In a joint press conference after the talks, Blinken said the allies are prepared to make both "short and longer-term adjustments to military posture" as appropriate, expressing concerns about the possibility of a nuclear test by North Korea.

Blinken added Seoul and Washington are in close coordination in relation to the North Korean nuclear and ballistic missile programs.

However, he stressed that the U.S. possesses no hostile intent against the North and is open to dialogue and diplomacy, urging the North to respond to the calls for dialogue.

Minister Park assessed that the North has now finished preparations for another nuclear test and only a political decision has to be made. Park warned that if North Korea conducts another act of provocation, including a nuclear test, it will only face more sanctions and deterrence.

The minister also said that the two sides agreed to reactivate the Extended Deterrence Strategy and Consultation Group as soon as possible, which will manage the timely deployment of strategic assets if necessary.

Also on Monday, U.S. President Joe Biden announced that he has decided to continue the national emergency with respect to North Korea.

In a message to Congress, Biden said he made the decision to extend the status, citing the existence and risk of the proliferation of weapons-usable fissile material on the Korean Peninsula.

He also noted that provocative, destabilizing, and repressive actions and policies of North Korea continue to constitute an unusual and extraordinary threat to the national security, foreign policy, and economy of the United States.

Citing those reasons, Biden said that he has determined that it is necessary to continue the national emergency with respect to the North.

On Tuesday, Seoul's foreign ministry said that if North Korea goes ahead with a nuclear test, South Korea will push for unilateral sanctions in addition to new sanctions by the UN Security Council.

A ministry official said that the government, in coordination with the U.S., is keeping close tabs on possible additional provocations by the North, including preparations for a seventh nuclear test at the Punggye-ri site.

The official said if the regime conducts the test, Seoul will seek various countermeasures in the form of unilateral sanctions and a new sanctions resolution at the UN.

The statement is seen as further evidence of Seoul's determination to actively enhance deterrence as it pursues the reactivation of the Extended Deterrence Strategy Consultation Group with the U.S. as well as a range of pressure tactics against the North.

According to an official at the top office on Friday, Yoon and Guterres held their first phone conversation earlier in the day.

Yoon said that unless the UNSC responds firmly and in a unified manner, it could send the wrong message in appearing to tolerate the regime's nuclear and missile development, pointing out that the North's provocations seriously threaten regional and global peace and stability.

Yoon's remarks are in an apparent reference to two of the UNSC's permanent member states, China and Russia, vetoing a resolution last month to impose additional sanctions on the North for its intercontinental ballistic missile test.

The South Korean leader also expressed grave concern over the COVID-19 situation in the North, citing Pyongyang’s unresponsiveness to Seoul's offer of vaccines and other medical aid.