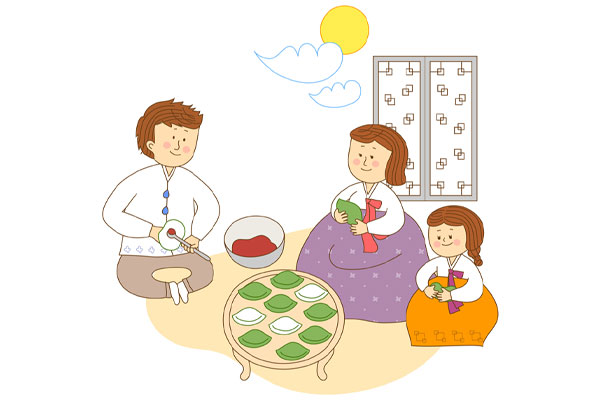 Less than a month after I arrived in South Korea, the country celebrated the Chuseok holiday. While watching TV in the morning, I saw the phrase “national migration.” Indeed, expressways were jam-packed with cars lined up bumper to bumper. I realized what national migration meant. I was surprised to see some drivers give an impromptu interview on the road without any preparation, and I was really shocked at the massive traffic jam.

People who have defected from North Korea might be unfamiliar with the scene of a large number of people hitting the road to visit their rural hometowns on traditional holidays in South Korea.

Chuseok refers to an autumn harvest festival that falls on the fifteenth day of the eighth lunar calendar. This holiday is also called gaebae, gawi and hangawi. The origin of Chuseok dates as far back as the era of Silla, one of the three ancient Korean kingdoms, in the early 1st century. It is said that traditions of the age-old Chuseok holiday have evolved differently little by little in South and North Korea since national division. Today, we’ll talk about how the traditional holiday is celebrated in North Korea with Professor Jeong Eun Chan at the National Institute for Unification Education.

As a North Korean defector herself, Professor Jeong says Chuseok in South Korea was rather strange to her at first. The most extraordinary scene, among others, was the “national exodus” to hometowns for family gatherings.

In South Korea, the Chuseok holiday period usually lasts for three days including the day before and after Chuseok. This year, Chuseok falls on Saturday, September 10, and the following Monday is designated as an alternative holiday to make it possible for workers to take four days off in a row.

North Koreans, on the other hand, have only one day off for Chuseok, so it is impossible to see something like South Korea’s annual mass migration in the North.

First, North Korea’s traffic infrastructure is so poor that locals can’t travel easily during the one-day Chuseok holiday. For example, it takes as long as 20 hours to travel from Pyongyang to Chongjin(청진) by train, even without delay. Second, it is hard to get a pass or travel certificate issued. Local residents may visit their relatives living in nearby areas but it is difficult to visit those in faraway regions. Third, it costs to move about.

In South Korea, it is common to see people leaving home and having a merry time with their family in some other place during Chuseok. But North Koreans, in general, enjoy the holiday with their family or relatives in areas adjacent to their homes.

Chuseok is a happy occasion to express gratitude to ancestors for a bountiful harvest during a season of fine weather that isn’t too hot or too cold. It is easy to understand an old saying about the holiday: “No more no less, may it always be like Chuseok.” In South Korea, Chuseok is one of the nation’s largest and most celebrated traditional holidays, along with the Lunar New Year’s Day.

That’s not the case in North Korea, though. The country banned official Chuseok celebrations in 1967, saying that the holiday runs against the socialist way of living. But it allowed citizens to visit their ancestors’ graves for Chuseok in 1972 and designated Chuseok as a traditional holiday again in 1988. Still, North Korea does not use the term “the nation’s largest holiday” when referring to Chuseok. Professor Jeong says she was quite unfamiliar with the expression at first.

In North Korea, there are three kinds of holidays. First, socialist, national holidays include the birthdays of former leaders Kim Il-sung and Kim Jong-il, foundation anniversaries of the government and the Workers’ Party, and the Victory Day marking the signing of the Korean War Armistice Agreement on July 27, 1953. Second, March 8 International Women’s Day, May Day and June 1 Children’s Day are categorized as international holidays. Lastly, the Lunar New Year’s Day, Chuseok and Dano are included in traditional holidays. While Chuseok is considered one of the most celebrated holidays in South Korea, such expression is only applied to Kim Il-sung’s birthday in the North.

South Koreans are familiar with the term, “post-holiday syndrome,” which refers to a phenomenon of suffering from various symptoms due to the stress people feel around a long holiday like Chuseok. When Chuseok approaches, it is common to find articles about how to prevent or overcome the post-holiday syndrome. Professor Jeong says she never heard of such a story when she was in North Korea.

The traditional holiday places a heavy burden on North Korean women, too, as they do most of the work preparing meals on the occasion. While gender equality is ensured under North Korean law, many women suffer from stress and physical fatigue around the holiday. But it doesn’t go as far as to become a social issue in the North, unlike in South Korea where even a new term was coined to indicate the post-holiday blues after the traditional holiday.

I remember my parents would prepare food for the ancestral memorial service and hold a ritual in front of gravesites of ancestors. At the time, I didn’t really think it was laborious work. After hearing about the phrase “post-holiday syndrome” in South Korea, I guess it must have been difficult for my parents to prepare all the food.

It may sound a bit odd to South Koreans, but the report says an endless stream of people visits the Patriotic Martyrs’ Cemetery during Chuseok.

On traditional and national holidays like Chuseok and Kim Il-sung’s birthday, North Koreans visit the statues of former leaders, the Kumsusan Palace of the Sun where the bodies of former leaders lie in state, or the Patriotic Martyrs’ Cemetery in Pyongyang. Not all residents join the ritual, though, as people in local provinces find it difficult to go all the way to the national cemetery in Pyongyang. Rather, citizens in nearby regions are encouraged to visit the places voluntarily, while institutions and groups are supposed to pay respect at the places out of obligation.

Songpyeon is a must-have Chuseok treat. The half-moon shaped rice cake is stuffed with fillings such as sesame seeds or beans and steamed on a bed of pine needles. Interestingly, vegetables are put inside North Korean-style songpyeon. The main ingredients are vegetables that are easy to find anywhere, anytime, such as napa cabbage, green onion and onion. First, napa cabbage is blanched in boiling water and cut in large chunks, along with other vegetables. Stir-fry minced meat and add the vegetables, red pepper powder, salt and minced garlic. Fry them together so the seasoning permeates evenly to the ingredients.

Tear off a small piece of the dough to form a ball and make a well in the ball. Place the filling in the well and seal tightly. Shape it to look like a half-moon and steam it for 30 minutes. Now North Korean songpyeon is done. North Korean homes usually make this rice cake for Chuseok.

North Korean songpyeon is twice as big as the South Korean one. Some songpyeon in the Gaeseong region is three times larger. The rice cake varies by region, depending on what ingredients are used as fillings. In North Hamgyong Province, for example, vegetables, pork and tofu are mixed to make fillings. Kimchi or the year’s new crop of kidney beans can be put inside occasionally. Just like South Korean people, North Koreans believe that those who make pretty songpyeon will have a pretty daughter.

North Koreans do not place songpyeon on the memorial service table for ancestors. They serve flat rice cake with decorative patterns called jeolpyeon(절편) instead. That is, they make songpyeon to share with their family and relatives, not to offer for a memorial rite.

People in South and North Korea have the same belief that beautifully crafted songpyeon will result in a beautiful daughter. Perhaps, the old saying has the purpose of encourage people to make songpyeon with great care and devotion. But North Koreans, unlike their South Korean counterparts, do not lay songpyeon on the table as an offering for ancestors.

In terms of Chuseok ceremonies, people in South and North Korea are not much different. Early Chuseok morning, they hold a special memorial service for deceased ancestors called charye. Food and drinks are prepared as offerings for the ritual. Then, they visit ancestral graves with their family members. After that, people in the village get together to play some sports or folk games, such as swinging and ssireum or Korean wrestling.

Entertainment for Chuseok is not complete without ssireum. Like in South Korea, a nationwide ssireum competition is held in North Korea on every Chuseok holiday.

The winner gets a bull and a gold cowbell as a prize to earn nationwide popularity.

What makes them even more depressed is that the inter-Korean face-to-face reunion program for separated families has been suspended for years, with the last such event taking place in August 2018.

Some 133-thousand South Koreans have registered to be reunited with their family members in the North. But not many of them are alive now. They are in their early 80s on average, with many members passing away each year. Reunions of separated families should resume quickly so the first generation of the war-torn families can meet their long-lost kin again before they die.

On Chuseok this year, like in previous years, war-separated families may gather in Imjingak Pavilion near the inter-Korean border and miss their loved ones, looking out over the North Korean land. Sadly, they don’t even know whether their lost family members are dead or alive. Split family members in North Korea, too, may miss their relatives in the South.

This year, Chuseok falls on September 10. We hope people in both South and North Korea will have a happy Chuseok holiday. On Chuseok night, let us look up at the large full moon and make a wish that separated family members on both sides of the border will be able to see each other again next year.