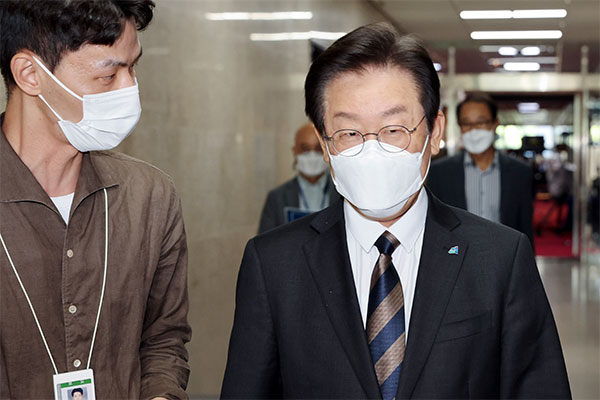 The Seoul Central District Prosecutors' Office indicted Lee of the charges on Thursday without placing the DP leader under arrest, a day before the statute of limitations runs out for the cases.

Lee, former mayor of Seongnam City, allegedly made false statements regarding the city's Daejang-dong land development project in December last year, when he was a presidential candidate for the party.

Lee is accused of spreading false information by denying he was acquainted with Kim Moon-ki, a key figure in the development project, in an TV interview on December 22 last year.

Kim was found dead in an apparent suicide after being questioned as part of a probe into his alleged involvement in the scandal.

The DP chair was also indicted for making false statements on another land development project in the city's Baekhyeon-dong area during his presidential campaign last year.

The indictment comes one week after prosecutors called in Lee for questioning on September 1. A few days later, Lee refused to accept the summon, saying that he had already written a written response to a written inquiry from the prosecution.

Lee is not the only recent presidential candidate to face accusations of breaking election law.

The DP on Monday filed a criminal complaint against President Yoon Suk Yeol on charges of spreading false information during his presidential campaign.

As the DP pressed charges against the president for violating election regulations, party spokesperson Park Sung-joon said that Yoon made false statements by denying his wife's alleged involvement in a stock price manipulation scandal.

This came in the wake of a report by an online media outlet that cited recent court proceedings that revealed a voice recording of now-First Lady Kim Keon-hee's telephone conversation with a stock broker approving the purchase of shares of Deutsch Motors, a BMW dealer involved in a price manipulation scandal.

During a televised presidential debate in February, Yoon claimed that there was no connection between his wife and a stock broker referred to at the time as "marker player."

Prosecutors are also questioning the wife of DP leader Lee on suspicions of misusing a government credit card.

The Suwon District Prosecutors' Office summoned Kim Hye-kyung on Wednesday on charges related to a breach of trust and breaking election laws.

Kim is suspected to have condoned a Gyeonggi provincial official paying for her restaurant bills with the provincial government card in question between July 2018 and September 2021 while Lee was Gyeonggi Province governor.

The provincial official is accused of misusing the card for a total of some 20 million won, or more than 14-thousand U.S. dollars, roughly ten percent of which is said have covered Kim's private expenses on some 20 occasions.

Lee's wife is also accused of violating the election law last August when she allegedly paid around 100-thousand won, or some 70 dollars, to buy meals for three DP officials, her driver and her lawyer after her husband declared his bid for the party's presidential nomination.

At a Supreme Council meeting on Wednesday, DP floor leader Park Hong-keun said the special prosecutor will be tasked with getting to the bottom of Kim's alleged stock involvement in a price manipulation scandal, falsification of credentials, and bribery.

In reference to Kim's alleged doctoral thesis plagiarism, Park accused the first lady of betraying her conscience and said that she must not be absolved of responsibility.

Criticizing the police for dismissing related charges, the DP floor leader called on the first lady to apologize to the public, retract her thesis and cooperate in the investigation.