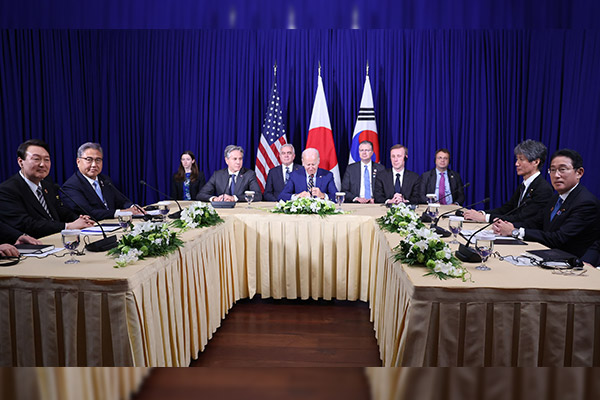 Seoul, Washington and Tokyo agreed to bolster extended deterrence around the Korean Peninsula. Leaders from the three countries held a meeting and reached the agreement on the sidelines of the ASEAN gatherings last weekend. North Korea reacted to the decision with a scathing statement and fired an intercontinental ballistic missile toward Japan.

In the first coverage of the latest developments, our Bae Jooyon has more on the South Korea-US-Japan summit.

Report: The leaders of South Korea, the U.S. and Japan met on the sidelines of ASEAN-led multilateral forums in Cambodia's Phnom Penh on Sunday to discuss ways to respond to North Korea's escalating military provocations.

During their first trilateral talks in five months, President Yoon Suk Yeol said three-way coordination among the countries is the "great bastion" of defending universal values and of achieving peace and stability on the Korean Peninsula and beyond.

The leaders adopted a joint statement encompassing both security and economic cooperation for the first time, reconfirming the U.S.’ pledge of extended deterrence against the North's threats.

They expressed an intent to share real-time intelligence regarding the North's missile activity, and agreed to establish a consultative body on economic security and to jointly respond to "economic coercion."

During a separate South Korea-U.S. summit, Yoon and Biden agreed to mobilize all available means to use overwhelming force in response to any form of nuclear activity by North Korea.

Addressing concerns about the exclusion of South Korean automakers from U.S. tax credits under the Inflation Reduction Act(IRA), Biden said South Korean businesses greatly contribute to the U.S. economy in the auto and electric battery industries, which should be considered in implementing the IRA.