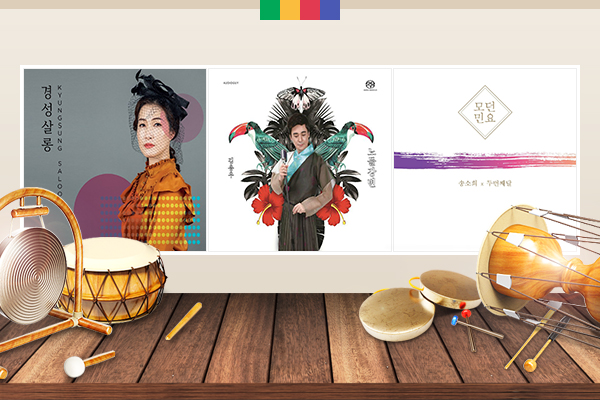 There was a dancer named Choi Seung-hee최승희 during the Japanese colonial period. She gained fame by becoming the first Korean to choreograph western-style dance. Her dance career began when she was inspired by the performance of Japanese modern dancer Bac Ishii바쿠 이시이 as a young girl and went to Japan to study under him. After dancing in Japan for a while, she returned to Korea and founded a dancing art institute to present new modern dance routines. But her fame didn’t make her complacent. Instead, she went onto learn Korean traditional dance, such as knife dance, fan dance, and Buddhist dance, which she adapted into modern dance. One of her most extraordinary dance pieces was Bosal dance, which propelled her to worldwide stardom. She became an icon of the Korean dance world and was even invited to be a judge with other world-class dancers at an international dance competition in 1938. Choi wasn’t only a great dancer, but also a good singer. She released an album with her solo “A Garden in Italy,” which was included in the original soundtrack of 2017 movie “Anarchist from Colony” about a Korean independence activist in Japan. Today, we will listen to Lee Jung-pyo singing “A Garden in Italy” to the accompaniment of gayageum.

A Garden in Italy/ Sung by Lee Jung-pyo

As Choi Seung-hee gained worldwide fame, the Japanese government schemed to capitalize on her popularity. She reportedly engaged in pro-Japanese activities, such as putting on dance performances for Japanese troops. But her close friends vouch for her integrity by testifying that she did so under duress from the Japanese government, that she sent the money she made through those shows to help fund Korea’s independence movements. Although too much time has passed to verify those testimonies about Choi, her contribution to the art of modern dance in Korea can never be downplayed. During the colonial era, there were several artists who tried to console the Korean people while evading the watchful eyes of Japanese authorities. One of their works was a folksong entitled “Nodeulgangbyeon노들강변,” meaning the banks of the Nodeul River, a song about a peaceful spring scenery. But in the later part of the song, the lyrics deplore the bleak reality of colonial rule and depicts the Korean people’s grief and suffering. The lyricist of this song was Shin Bul-chul신불출, who was also famous for mandam만담, a type of comic talk. He reportedly wrote this song when he was fascinated by the beautiful riverside scenery as he waited for a boat at a Hangang River dock. The song became a big hit and a favorite folksong when singer Park Bu-yong박부용 released it in an album in 1934. Today, we’ll listen to Kim Yong-woo singing “Nodeulgangbyeon.”

Among Gyeonggi-do folksongs, there are quite many new folksongs that were released during the Japanese colonial era. One example is “Taepyeongga태평가” or “Song of Peace.” It begins with, “What is the use of being annoyed? What is the use of being upset?” The song lifts up one’s spirit when he or she is depressed and exhausted. The song was originally titled “Taepyeongyeon태평연” when it was released in 1935. It was made popular by Seonwu Il-seon선우일선, the hottest singer at the time. “Taepyeongyeon” was a variation of Gyeonggi folksong “Changbu Taryeong창부타령,” which was given a new vibe by using the waltz rhythm. The song’s popularity as a Gyeonggi folksong can be attributed to Lee Eun-ju이은주. She had fled to Daegu during the Korean War, but a refugee’s life there was too hard for a star singer to endure. But then, she was given a chance to perform on stage. Wishing for peaceful days to return soon, she rearranged “Taepyeongyeon” to a moderate tempo, which delighted the audience. This song represents the indomitable spirit of the Korean people who never gives up hope even in the darkest days. Let’s wrap up this week’s Sounds of Korea with Song So-hee singing “Taepyeongga” to the accompaniment of The Second Moon.

Taepyeongga/ Sung by Song So-hee, performed by The Second Moon