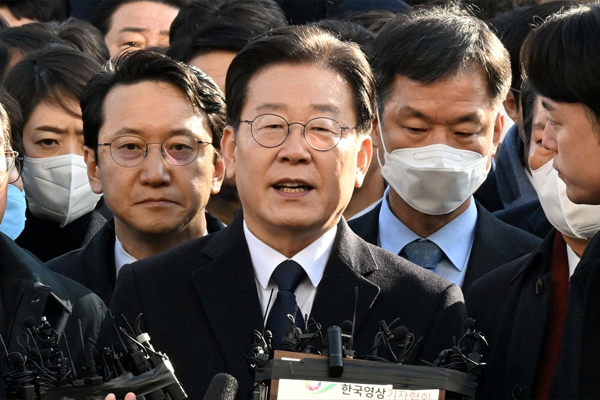 appeared for prosecutors' questioning in an investigation into third-party bribery allegations. Appearing at the Seongnam branch of the Suwon District Prosecutors' Office on Tuesday morning, // Lee denied any suspicions against him.

The main opposition chief was at that time the mayor of Seongnam city, which owns the club.

Surrounded by hundreds of supporters as well as others denouncing him, Lee argued that the probe is politically motivated before entering the district prosecutors' office on Tuesday.

"I understand that this summons for questioning is a trap set by the politically-motivated prosecution. I never wanted any privilege nor done anything wrong, and there is no reason for me to evade this. I will stand up against the probe."

Prosecutors believe that the financial contributions totaling over 16 billion won, or nearly 13 million dollars, were made by Doosan Group, Naver Corporation and four others in the name of advertising expenses in return for Lee's approval of construction and other business projects in the city.

"I ask you to be the judge. Should I be blamed for attracting corporations to secure more taxes and create jobs? Should I be blamed along with the staff of the Seongnam citizens' football team, who arranged advertisements and saved taxpayer money? How could local governments attract companies and improve the quality of life in their cities if the prosecution wields its power like this?"

Lee is specifically suspected of changing the zoning designation of a nine-thousand-900-square-meter parcel of land owned by Doosan located in Bundang, Seongnam in return for the company's sponsorship. The zoning change allowed Doosan to make immense profits.

Prosecutors in September indicted a former CEO of Doosan Engineering & Construction and a city official of Seongnam in connection with alleged corruption involving Lee.

Prosecutors have reportedly secured testimonies from corporate officials that the city called for financial contributions.

While the prosecution seeks to prove that Lee was involved in arranging third-party bribery for his own political gain, Lee contends that the club belongs to the city, and all corporate contributions were for the benefit of the city.

Outside of the Seongnam FC probe, Lee is also mired in the so-called "Daejang-dong scandal," in which he is suspected to have helped an asset management company join a land-development project in Seongnam and make enormous investment profits.