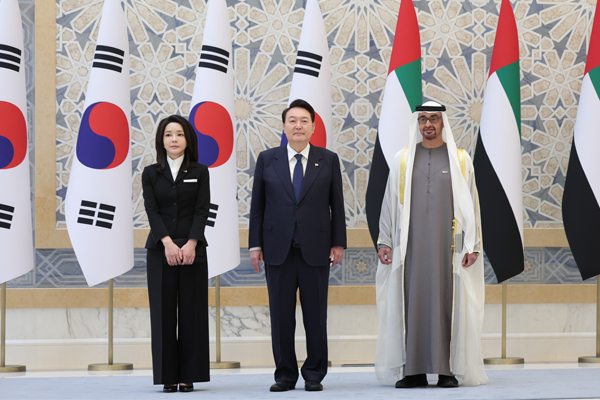 President Yoon Suk Yeol is making a state visit to the United Arab Emirates(UAE) in his first overseas trip of the new year.

By invitation of UAE leader Sheik Mohammed bin Zayed Al Nahyan, the four-day visit from Saturday marks the first-ever state trip to the Middle East country by a South Korean leader since the two countries forged diplomatic relations in 1980.

Yoon is seeking to elevate their bilateral relationship to a special strategic partnership through a summit with Sheik Mohammed, with a focus on nuclear reactors and energy, the defense industry and climate change among other areas.

Accompanied by representatives of some 100 South Korean businesses, the president is mulling over ways to collaborate with the UAE’s sovereign wealth funds, with a number of preliminary contracts reportedly in the works.

After attending a business forum with UAE companies, Yoon will head Switzerland to attend the World Economic Forum, becoming the first South Korean president to do so since Park Geun-hye in 2014.

In a special address to be delivered at the forum in Davos on Wednesday, the South Korean leader will propose measures of international cooperation and solidarity regarding global supply chains, the clean energy transformation and the digital order. A host of meetings with other participating global leaders are also expected to be arranged, with summits possible.

Yoon’s schedule in the European country includes a sit-down with the CEOs of Korean and foreign conglomerates in Davos on Tuesday as well as a meeting with South Korean residents in Zurich that same day.

He is also scheduled to attend an event promoting South Korea's bid to host the 2030 World Expo and also visit the Swiss Federal Institute of Technology in Zurich.

President Yoon will return to South Korea on Saturday, the 23rd of January, the first day of the Lunar New Year holiday.