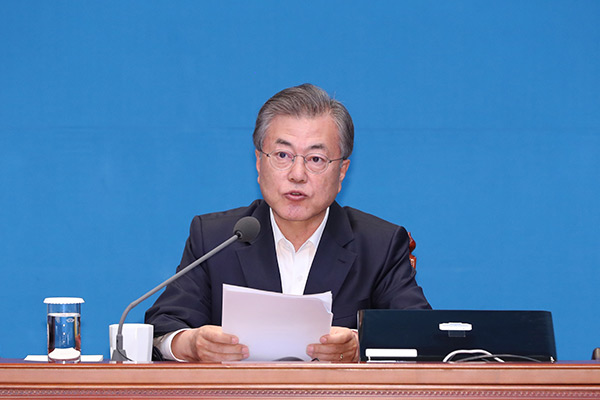 On May 10, President Moon Jae-in marked his second anniversary in office. During his tenure last year, South Korea surpassed per capita income of 30-thousand US dollars just 12 years after surpassing the 20-thousand dollar mark. However, many other economic metrics are quite dismal, stoking public concerns over the president’s economic policies, collectively called “J-nomics.”

Today, we’ll review the first two years of J-nomics and some of its primary obstacles ahead with economic commentator Chung Chul-jin.

It seems the public is overall positive about President Moon’s foreign policy, especially regarding inter-Korean summits. The same evaluations cannot be said of his economic policy. In a meeting last week set up to review the government’s last two years of economic policy, Deputy Prime Minister for Economy Hong Nam-ki said that the government has worked hard to shift the overall economic paradigm in the face of tough conditions. But he admitted that people have suffered from economic difficulties in the process.

The South Korean people generally support the Moon government’s peace efforts in regional diplomacy on the whole. But many have expressed concerns over the ever-deteriorating domestic economy.

As a matter of fact, the government’s overall economic performance has failed to live up to prior expectations. Amid the continuous decline of exports and investment, the Korean economy showed negative growth in the first quarter of this year.

The negative growth in the first quarter has indeed come as a shock. One of the most disturbing developments is slowing exports. Though domestic consumption has been sluggish for years and Chinese tourism has dropped off, strong exports helped keep the economy afloat in 2017 and 2018. In fact it’s no exaggeration to say that exports, especially the amazing performance of semiconductors, have led the Korean economy.

For the past five months, however, outbound shipments - even semiconductors - have declined. Worse yet, industry watchers say that chip exports have yet further to fall, and it is uncertain if they will bottom out in the second quarter.

“Income-led growth” comprises the keystone of J-nomics. It is a strategy designed to expand the economy by raising household and individual income rather than just nurturing the private sector. Economics literature suggests that higher incomes will boost consumption, prompting companies to increase investment and offer more jobs, creating a virtuous economic cycle.

However, current economic indicators are not really in sync with this theory of income-led growth. Exports, the main pillar of the Korean economy, fell for the fifth consecutive month in April, while Korea’s current account surplus for the first quarter of this year fell to the lowest level in nearly seven years.

The number of employed individuals was tallied at 26.92 million in 2018, the same year only 97-thousand jobs were added in total. Employment has improved slightly this year, but analysts say it is because the government has poured resources into creating public sector jobs as well as special opportunities for Korea’s increasingly large elderly population.

Investment, production and private consumption have all declined, causing the economy to shrink in the first quarter of 2019 with GDP growth of minus 0.3 percent.

In the past, noticeable drops in economic growth rates were due to unforeseen crises, such as the Asian financial crisis in the late 1990s and the so-called “Great Recession” some ten years later. In the absence of a major callamonity, why is the Korean economy struggling, and why isn’t J-nomics creating its intended effects?

Basically, “income-led growth” starts with raising household incomes, which are described otherwise as wages. Rising incomes are supposed to encourage people to consume more. For that purpose, the government raised the minimum wage quickly and dramatically. But it is hard to say that the measure has actually led to more consumption. For the corporate sector, higher wages mean a greater cost burden and a decline in profitability. The government took this part for granted, the consequences of which have begun to surface.

Higher wages mean more income for workers and possibly more consumption, but companies bear the brunt of the associated costs. Therefore, the ‘virtuous economic cycle’ on which the income-led growth theory rests can be created only when household consumption compensates and surpasses economic losses of companies.

This is because higher wages can lead to an increase in other expenses, such as retirement accounts, taxes and interest payments. All things considered, the income-led growth policy has clear limitations.

Demonstrating an awareness of these problems, the government is shifting resources towards innovative growth, which, along with the initiative to raise wages and an effort to create a fairer economy, comprise the three primary pillars of J-nomics.

The government mobilized significant resources for income-led growth, but from the second half of last year, it began to shift its focus to innovative growth, another axis that props up J-nomics. President Moon is enthusiastic about cultivating new industries and has toured the country highlighting this intent. Most recently, the president joined a Samsung Electronics event on April 30 and commended the company's plan to diversify the semiconductor industry. He said that the government would work to promote three industries as new growth engines in Korea: system semiconductors, bio health and future automobiles. It seems the Moon government is now focusing on innovative growth to revitalize the economy.

In fact, the government has been aggressive in its innovative growth drive for the last two years. It has announced various regulatory reform plans with the purpose of promoting the growth of new industries and creating more jobs by removing unnecessary regulations. The plans include measures to lift regulatory restrictions on the banking and medical sectors as well as those aimed at increasing the number of self-employed individuals.

The government is expected to do all it can to expand private investment as the innovative growth policy comes together further during Moon’s third year in office. However, Mr. Chung says that a bolder policy will be needed to boost the economy.

The government’s topmost task is, of course, to revive the economy. When the economy falls below some point, it is very difficult to restore it to a previous state, and requires a much more complex and variable approach than is otherwise necessary when economic metrics are above a certain threshold.

I think the Korean economy is nearing a critical point now. Last month, the government proposed a massive supplementary budget, but I think even this is insufficient to tackle the slowdown. The government needs to concentrate its energy into stimulating the economy and preventing a slide below a critical low point. This is the government’s key economic task this year.

It is necessary for the government to encourage corporate activities and execute its proposed extra budget in order to breathe new life into the stagnant economy.

Next month, the government will announce measures to revive the economy, as well as its policy vision for the second half of the year. It must objectively assess the results of its economic policies in the last two years and devise proper measures that better reflect the reality on the ground.