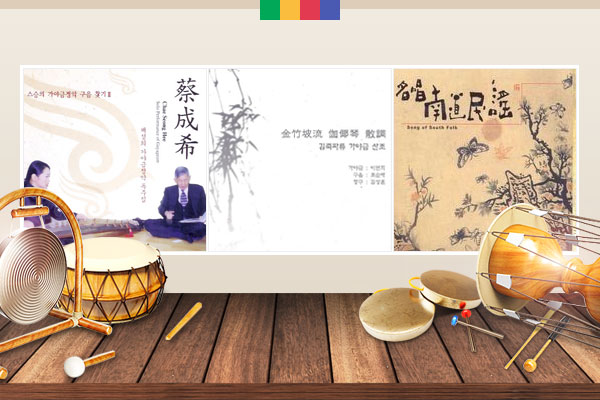 Musicians in the old days used to learn music not by reading notes, but by watching and imitating their teachers. This learning process is described as “showing with the mouth and teaching with the heart.” Even when teaching musical instruments, teachers would oftentimes sing the tunes instead of showing the techniques. The mimicking of the instrumental sounds is called “gueum구음” which includes not only the pitch but also the playing techniques. For example, let us take geomungo. “Dang당” is the sound made by pressing down on the strings with the ring finger and “dong동” is the sound made with the forefinger. Also, the bamboo stick called “suldae술대” is used to pluck the strings downward, but when the teacher says “ddeul뜰” it means to pluck the strings upward with a suldae. By studying these different “gueum” or sounds, a student can play an instrument just by listening to the teacher’s song. This method works for teachers as well, because they can teach not only the playing techniques, but also emotions that cannot be conveyed by the sound of instruments. The first piece we’re going to listen to today is “Sanghyeon Dodeuri” from “Yeongsanhoisang” with geomungo virtuoso Seong Gyeong-rin doing the gueum and his student Chae Seong-hee playing the gayageum

Gueum for gayageum is similar to that for geomungo, but it has almost disappeared these days since many musicians no longer rely on that teaching method anymore. The recording you just heard was an attempt to rediscover the gueum for gayageum through that for geomungo. When this recording was done, master Seong Gyeong-rin was over 80 years old, making him the eldest professor at the National Gugak Center. The admired geomungo virtuoso used to serve as the director of the National Gugak Center and the principal of Gugak National High School for many years. Gayageum player Chae Seong-hee was a graduate of Gugak National High School and had been a member of the Court Music Orchestra of the National Gugak Center. So this ensemble recording meant a lot to both the teacher and the student. Now the second piece of today’s show is a gayageum sanjo piece done with gueum. Gayageum player Lee Yeon-hee이연희 was taught by gayageum virtuoso Kim Juk-pa김죽파. Master singer Jo Sun-ae조순애 is a traditional singer who was at her prime during the 1950s and 60s. Her husband Kim Dong-joon김동준 was a renowned drum player who used to play for Kim Juk-pa, so she was able to express the beauty and sentiments of the gayageum tune. Here’s the gayageum sanjo in the style of Kim Juk-pa with Jo Sun-ae doing the gueum and Lee Yeon-hee playing the gayageum.

Although imitation is said to be the sincerest form of flattery, traditional Korean musicians guarded against students copying the sounds of their teachers. A music student is recognized as a true musician when the student goes beyond what is taught by the teacher and creates his or her own sound. This is why musicians in the old days used to train by themselves after learning the basics from their mentors. When studying music under a master, a student did not adhere to a set schedule. Learning did not stop in the classroom. Sometimes, a student lived with his or her teacher to pick up their attitude towards music and witness how the teacher hones their own skills. Oh Jung-hae, the star of the movie “Sopyeonjae서편제,” once talked about her life with her mentor, Kim So-hee. Oh talked about how Kim made her wash blue jeans in cold water, even in the middle of winter, and wry them dry. The humble master never threw away food, not even spoiled food, so she had to eat the bad food with her teacher. All this was part of the teacher’s master plan to shape Oh Jung-hae into a singer who can overcome any difficult situation and perform unperturbed on stage. The teacher knew how hard it was to live as an artist, so she toughened up her student so that the student would not give up due to small obstacles. The last piece for today is “Boat Song” sung by Kim So-hee.