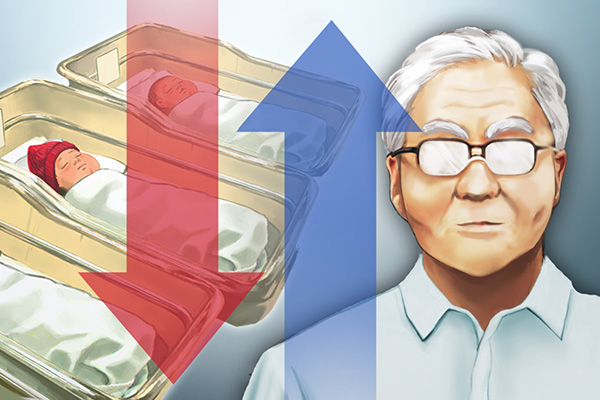 The Hyundai Research Institute warns that with the economy mired in a low-growth, low-inflation structure, South Korea’s growth potential may decline to as low as the one percent range from the current mid-two percent level. Here is Hong Joon-pyo, a researcher from the institute, explaining the weakening growth potential of the Korean economy.

The growth potential refers to the maximum possible rate at which an economy can grow using all of its resources including labor, capital and technology without generating side effects such as inflation.

Korea’s growth potential was in the mid-seven percent level from 1991 to 1995 and fell to the mid-five percent range between 1996 and 2000 during the Asian financial crisis. The figure slipped to the four percent range in the 2000s and again to three-point-two percent in the 2011 to 2015 period after the global financial crisis. It slumped to two-point-five percent from the 2016 to 2020 period. The Hyundai Research Institute estimates that the growth potential may further decline to two-point-one percent between 2021 and 2025 and below two percent from 2026.

Korea enjoyed a high growth rate of eight to ten percent in the 1980s and 90s but the rate has steadily shrunk to two to three percent due to unfavorable internal and external factors.

In the past, the slowing economy was attributed mainly to the Asian currency crisis and the global financial crisis. But now, it is the nation’s chronically low birthrate and rapidly aging population that is contributing to the decline in growth potential.

According to Statistics Korea, Korea’s working-age population, or people aged between 15 and 64, is expected to begin to decline this year after peaking at 37.6 million last year. Korea became an “aging society” in 2000 and then an “aged society” in 2018. The transition took 18 years, compared to the 24 years in Japan. The rapidly aging population weakens productivity and reduces saving rates and investment, stoking concerns that the economy may lose vitality.

Statistics Korea says that the productive population is set to decrease by 55-thousand this year and dwindle by 230-thousand next year. As the baby-boom generation begins to turn 65 next year, the working-age population is estimated to diminish by an annual average of 330-thousand from 2020 to 2029 to as much as 520-thousand between 2030 and 2039.

Korea’s fertility rate, which is the average number of children a woman bears in her lifetime, hit a record low of point-98 last year and is expected to dip further below point-9 this year.

The labor force shortage and aging population will inevitably make the Korean economy lose steam, but another problem is sluggish investment.

As the economy becomes larger, the input capacity in capital or capital accumulation naturally weakens. However, while going through the Asian currency crisis and the global financial meltdown, Korea saw the situation worsen at a faster pace than other advanced economies.

The growth rate for facility investment has plunged from one to five percent in the 2010s from ten percent in the 1980s. Following the 2008 global financial crisis, decreasing global imports affected Korea’s exports negatively, leading to a contraction in industrial activities for the export-dependent Korean economy. As a result, companies have become increasingly reluctant to invest in facilities.

Companies in Korea are delaying or cancelling facility investment due to major negative factors such as the conflict between Korea and Japan as well as the trade war between the U.S. and China.

Korea also lacks new growth engines, which could facilitate corporate investment. The chemical industry contributed greatly to Korea’s gross domestic product or GDP in the 1970s and the ‘80s. In the 2010s, the same industry still accounts for 4 percent of the GDP, a similar level to decades ago. Also, Korea still relies heavily on automobiles and semiconductors for outbound shipments, just as it did 20 years ago. The manufacturing industry, which led economic growth in the past, is still playing a significant role in the economy. But the nation has failed to improve the efficiency of research and development or R&D, an important base for new growth engines.

Korea ranks first in the world in terms of R&D investment as a percentage of GDP. But the number of patents per 10-thousand researchers in Korea in 2016 remained at 72, way below the OECD average of 105.

The inefficient use of R&D investment is also attributed to the fact that researchers, in general, do not like to work in Korea. Local researchers here complain of insufficient support and treatment and therefore prefer to work in other countries. Korea has difficulty attracting highly qualified researchers from overseas.

It is difficult for the country to increase the workforce and accumulate capital due to the extremely low birthrate and rapidly aging population. In this situation, the nation may find hope in technology.

Korea’s total R&D investment reached 70 billion US dollars in 2017, and its R&D spending to GDP ratio was tallied at four-point-six percent, which is nearly double the OECD average of 2.4 percent. However, the country cannot improve its R&D efficiency if it sticks to its current practices which include researching irrelevant areas and focusing only on short-term projects and visible results. Mr. Hong says that boosting innovation is the key to raising the growth potential.

Weakening input in labor and capital is an inevitable trend, so Korea should make an all-out effort to strengthen technology. R&D investment must be used in a way to actually create added value in industries or markets rather than for academic purposes. The nation should also improve the research environment and infrastructure consistently so it can prevent a brain drain and bring in more foreign professionals to Korea. Although the possibility may be low, it is necessary to encourage researchers to take up new challenges to work out innovations and build a system to enable them to try again even if they do fail.

South Korea’s growth potential is tumbling faster than expected. The International Monetary Fund forecast that the country’s growth potential may plunge to the one percent level around 2030. To dismiss concerns about slowing growth, Korea should increase productivity and build infrastructure that stimulates new challenges.