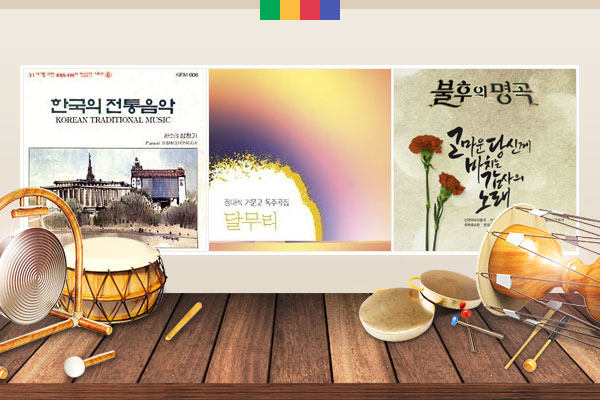 In the story of Simcheong(심청), the devoted daughter throws herself into the sea as a sacrifice so that her father can have his eyesight back. The daughter is then saved by the Great Jade Emperor in the sky and marries his son to become an empress. However, despite her high status and comfortable life, she could not help but worry about her father who was still living by himself without anyone to help with the daily chores and still believed that his daughter sacrificed herself to bring his sight back. When Simcheong(심청) saw a flock of geese flying high in the autumn sky, she longed to join them to visit her father and comfort him. But she could not leave the heavenly palace at will, so all she could do was tear up at the thought of her lonely father. So, she wrote a letter to her father when the autumn moon became full and filled the garden. Moonlight seeped through a beaded curtain made of coral and the chirping sounds of crickets echoed inside the silk screen. She carefully wrote one line after another, but cried at the realization that she could not ask anyone to deliver the letter. This scene is described in a song titled “Chuwolmanjeong(추원만정),” which means a garden filled with the autumn moon. Today’s version of the song is performed by Seong Chang-sun(성창순).

Autumn is a bountiful season, with crops ready to be harvested and people preparing for Chuseok(추석). The weather is neither too hot nor too cold and the sky is sparkling blue. It is the perfect time of year to congratulate ourselves for another good harvest and enjoy a well-deserved celebration.

However, around this time of the year, loneliness becomes more pronounced for those who left Korea to live in other countries. Holidays are meant to be spent with family and friends, and Chuseok(추석), one of the two greatest traditional holidays in Korea, is also a time to remember one’s ancestors who supposedly looked after the well-being of their descendants during the year. When this holiday comes around, many Korean expats who live abroad tend to miss their families and regret not having spent more time with their loved ones. Fortunately, unlike Simcheong(심청), who was left holding a letter for her father with no means to mail it, we have cell phones and the internet to call family and friends whenever we want. However, the longing we have for our loved ones is no different from the love and sadness Simcheong(심청) felt for her father. Because of bright lights, it has become very hard for people to see the moon or the stars in the city. Since the moon is said to be the biggest on Chuseok(추석), let’s all look at the bright, round moon this year and pray for the health and good fortune of our loved ones. The second piece for today’s show is the first two movements of “Dalmuri(달무리)” which means the lunar halo, performed by geomungo(거문고) virtuoso Jeong Dae-seok(정대석).

Not everyone finds the holidays to be fun or plentiful. For some people in tight financial situations, holidays like Chuseok(추석) can be a burdensome and lonely occasion. While some people are busy cooking delicious food, some less fortunate people may be wishing for the celebration to end soon. In the story of Heungbo(흥보), the kind but impoverished man has nothing to feed his children on Chuseok(추석). Desperate for food, he decides to make porridge out of the ripe gourds that grew from the seeds brought by a swallow. He sawed open the gourds only to find them filled with rice, money, and treasures. More amazingly, the gourds were refilled with riches as soon as they became empty. These magic fruits were his reward for nursing an injured swallow back to health. Having more than enough food to feed his family, Heungbo(흥보) called his neighbors and other needy people to his house to share the wealth. He was determined to spread his goodwill since he was able to survive with the help of other people. This week’s Sounds of Korea concludes with a heartfelt wish for our listeners to enjoy a bountiful and merry Chuseok(추석). Here are master singers Ahn Sook-sun(안숙선) and Nam Sang-il(남상일) singing a passage from pansori(판소리) Heungboga(흥보가) that describes Heungbo(흥보) sawing the gourds open.