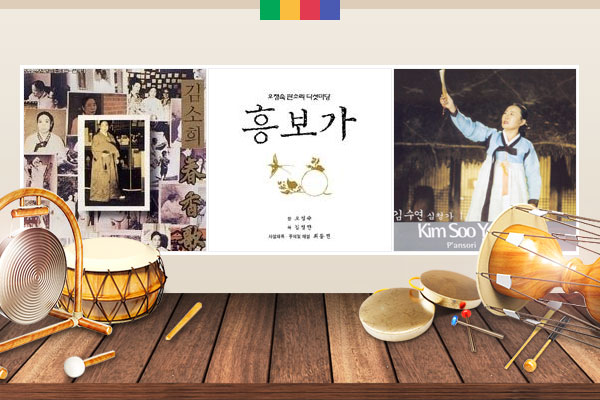 In most stories, whether they are movies, TV shows or novels, the leading characters receive the most attention. However, they would not shine as brightly if it were not for the solid supporting characters. Main characters tend to live somewhat predictable lives, so it is often up to quirky side characters to spice up their stories. These characters or actors are called scene-stealers in today’s cinema. There are eye-catching supporting characters in pansori(판소리) pieces as well. In Chunhyangga(춘향가), they would be Bangja(방자), a faithful manservant to Lee Mong-ryong(이몽룡), Wolmae(월매), a retired gisaeng(기생) and Chunghyang’s(춘향) mother, and Magistrate Byeon(변) who torments Chunhyang(춘향). Among them, Bangja(방자) is the most unique character. Bangja(방자) wasn’t actually a person’s name but a blanket term for the servants running errands in local government offices. In the story of Chunhyangga(춘향가), Bangja(방자) accompanies Lee Mong-ryong(이몽룡) to an outing at Gwanghallu(광한루) where the young scholar first spots the beautiful Chunhyang(춘향). There, Bangja(방자) plays the crucial role of setting up the two. Although Bangja(방자) is of low social standing, he learned a lot while working at the government office and knows a lot about how the real world works. So, it’s not surprising that he is much more skillful than Lee Mong-ryong(이몽룡) in starting a romantic relationship. He later shows his tender side when he cries his eyes out as he delivers a letter from the imprisoned Chunhyang(춘향) to his master. The first piece we’re going to hear today is the passage in which Bangja(방자) delivers his young master’s invitation to Chunhyang(춘향). Master singer Kim So-hee(김소희) sings the aria.

Now let’s move on to the villain in the pansori(판소리) Heungboga(흥보가). Although Nolbo(놀보) is the main villain in this piece, he doesn’t appear in that many scenes. But the story of Heungbo(흥보) would be pointless if Nolbo(놀보) wasn’t there, because it was the cold-hearted big brother who kicks out Heungbo(흥보), who is rather wishy-washy and incompetent in some sense, to face the harsh world. Heungboga(흥보가) starts with the narrator reciting a long list of Nolbo’s(놀보) vices like kicking someone who’s down or pouring fuel on the fire. Some of his bad habits can be downplayed as pranks, but such behaviors like violating a widow or stealing acupuncture needles from a doctor or kicking a pregnant woman in the stomach are downright criminal. Only a man who would not blink at carrying out such heinous acts would be capable of kicking out his only brother to the street. Here’s a passage from Heungboga(흥보가) that describes Nolbo’s(놀보) ill temper, sung by Oh Jung-sook(오정숙).

Now let’s meet Bbaengdeok’s(뼁덕) mom from the pansori(판소리) Simcheongga(심청가). The story of Simcheong(심청) is filled with heartbreaking anecdotes of the devoted daughter trying to support her blind father. Simcheong’s(심청) mother died as soon as she gave birth to the baby girl and her blind husband had to raise the baby all on his own. Ever since she could walk, the girl begged for food to support her father and at the tender age of 15, she decided to offer her life to the sea god so that her father would regain his sight. Although the moral of Simcheongga(심청가) is Simcheong’s(심청) filial devotion to her poor father, the story wouldn’t have become so popular if it was filled only with such tragic developments. Bringing comic relief to the overwhelmingly sad story is Bbaengdeok’s(뼁덕) mom, who approaches Simcheong’s(심청) blind father grieving his daughter’s death and cons him out of the fortune given in return for Simcheong’s(심청) life. She then abandons him at an inn on their way to a charity event for blind people after hooking up with another man. She is undoubtedly a terrible person, but not as deplorable as Nolbo(놀보). Here’s a passage from Simcheongga(심청가), which describes the scandalous behavior of Bbaengdeok’s(뼁덕) mom, sung by Kim Su-yeon(김수연).