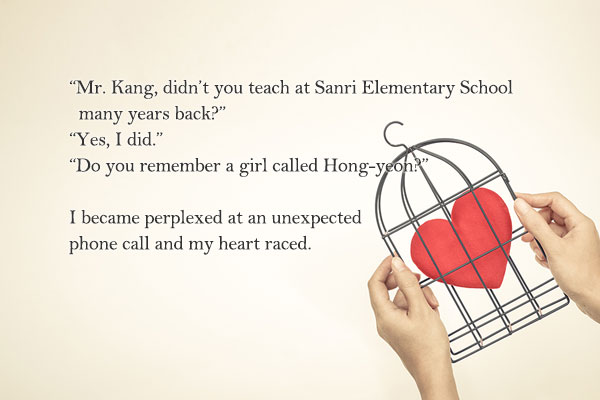 I was taking a nap after writing for a while one drowsy afternoon when I heard the phone ring.

“Mr. Kang, didn’t you teach at Sanri Elementary School many years back?”

“Do you remember a girl called Hong-yeon?”

I became perplexed at an unexpected phone call and my heart raced.

Ha Geun-chan’s “Female Student” starts with a phone call from Hong-yeon, a student of the story’s narrator Kang Su-ha had taught some 30 years ago. Hong-yeon had a huge crush on Su-ha back then.

‘Today Mr. Kang pinched my arm. My face burned up like a carrot in embarrassment at the unexpected incident. As I was coming back home from school, I kept having strange thoughts. Why did he pinch my arm? What did that mean? I couldn’t fall asleep as I kept asking myself those questions.’

First love usually comes during puberty. It’s hard for the young Hong-yeon to understand how exciting and overwhelming that feeling is since she had never experienced such emotions before. Although Su-ha is a teacher, he was just 19, fresh out of teachers’ school, and Hong-yeon was not much younger at 15 or 16. The age gap between them was much less than they realized. It was their relationship as a teacher and a student that confused Hong-yeon so much. She had no way of knowing how he actually felt. When in love, a slight in change in one’s expression either brightens or darkens the other person’s entire day. Such emotional ups and downs were well portrayed in this story.

: Debuted in 1957 with “Suffering of Two Generations” on Hankook Ilbo