"The Big Mountain" by Lee Ho-cheol 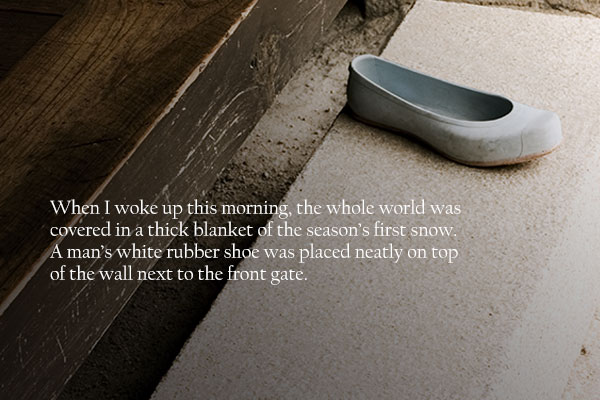 When I woke up this morning, the whole world was covered in a thick blanket of the season’s first snow. A man’s white rubber shoe was placed neatly on top of the wall next to the front gate.

My wife and I both had a creepy sense of foreboding.

“What’s with the rubber shoe? Is someone playing a prank on us?”

“Who would play such a prank?”

I took the bizarre rubber shoe to inspect it more carefully. It was just a man’s rubber shoe, nothing more and nothing less.

“I heard the sound of a gong all through last night. Someone must be hosting a shamanistic ritual.”

Her story was that she had thrown the shoe over someone else’s wall. Early the next morning, the homeowner who found the rubber shoe must have thrown that shoe over another wall.

The owner of the home where the shoe was thrown into must have discarded the shoe somewhere else.

It must have gone on repeatedly like this, from one house to another.

I grumbled as I glanced at the shoe, not wanting to even touch something that seemed to be harboring all sorts of bad luck.

My wife looked very determined as she muttered that she would take care of it.

At the same time, I recalled the black shoe I saw when I was a fourth grader and the shining blue mountain hidden by the clouds.

“This is all because we can’t see the big mountain.”

The big mountain is very significant. It has many meanings – a clear insight, future outlooks, and tolerance for people. If the big mountain is gone, that means that people lose their rational minds and insightfulness and get frightened by a mere discarded shoe and only think about how to pass the bad luck to someone else. Korean society is like a community without that big mountain, without a far-seeing understanding and a clear, comforting presence.