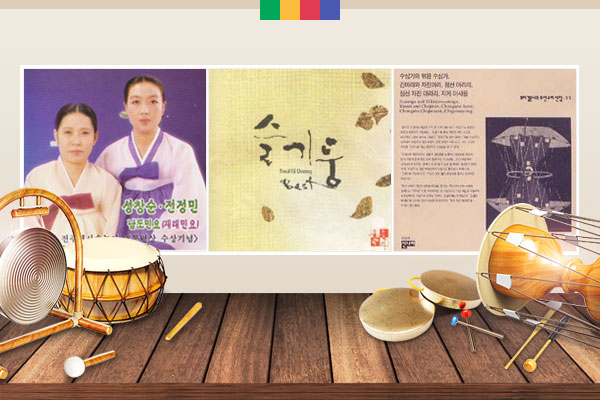 Just as each region in Korea has its own distinct dialect, music also has regional characteristics that indicate where it originated. For instance, folk songs from the Gyeonggi(경기) area is light and cheery, while that from the southern provinces sounds sad and dragged out. Such musical characteristics associated with a specific region are termed “tori(토리),” so those from the Seoul and Gyeonggi(경기) areas are called “gyeongtori(경토리)” and those from the southern areas “yukjabaegitori(육자배기토리).” “Yukjabaegi(육자배기토리)” refers to the songs in the Jeolla-do(전라도) Province which were enjoyed by a lot of people. There is even a saying that someone who cannot sing a “yukjabaegi(육자배기토리)” song is not a Jeolla-do(전라도) native. “Yujabaegi(유자배기토리)” songs are typically slow and undulating as if all the pain and sorrow are pouring out from deep within. Here’s a song titled “Yukjabaegi(육자배기토리)” sung by Seong Chang-sun(성창순) and Jeon Jeong-min(전정민).

The words to southern folk song “Yukjabaegi(육자배기토리)” are quite sorrowful. Here are some passages from the song.

Dream, dream, you heartless dream, the dream that chased away my beloved.

You shouldn’t have chased away my love, but instead wake me up.

When can I see my frugal love and live without worrying about parting?

Such sad lyrics were sung in turn by several singers. There is usually no refrain in a Yukjabaegi(육자배기토리) song and each passage ends with a short “he(헤).” Songs that originated from the eastern part of the Taebaek(태백) Mountain Range, like Gangwon-do(강원도) and Hamgyeong-do(함경도) Provinces, are called “menaritori(메나리토리).” The term “menari(메나리)” is a Korean name for mountain flowers. This word originated from a folk tale about an unfortunate woman named Hyangrang(향랑). She was abused by her stepmother when young and by her husband once she got married. Having nowhere to go, she threw herself in the river while singing a song titled “Sanyuhwa(산유화)” or mountain flowers. Folk songs such as “Five Hundred Years” and “Gangwon-do(강원도) Arirang” from Gangwon-do(강원도) Province and “Ongheya(옹헤야)” from Gyeongsang-do(경상도) Province are all classified as menaritori(메나리토리) songs. Now we’re going to listen to a famous piece titled the “Sangju(상주) Rice-planting Song,” a work song of the Sangju(상주) region. It was included in the gugak(국악) ensemble Seulgidoong’s(슬기둥) album in the 1980s and gained a huge following among young people. Here’s the “Sangju(상주) Rice-planting Song” sung by Kang Ho-jung(강호중) and performed by Seulgidoong(슬기둥).

Each note in Korean songs or music varies by the way it’s played. The way notes are played in vibrato or in staccato or in glissando hints at where that music piece is from. Now let’s listen to a folksong from the western region of Korea, which largely refers to the provinces of Pyeongan(평안) and Hwanghae(황해). The characteristics of the music pieces from this region are called “susimgatori(수심가토리).” “Susimga(수심가)” meaning the song of worries is a typical folksong from Pyeongan-do(평안도) Province. While “yukjabaegitori(육자배기토리)” of the southern provinces features rich, low vibratos, “susimgatori(수심가토리)” uses medium pitched tones and nasal sounds. During the Joseon(조선) period, people from the western region were discriminated against, which gave rise to songs like “Susimga(수심가).” When the song is over, it is sometimes followed by a faster version titled “Woven Susimga(수심가).” Today, we’ll hear these two songs sung by Kim Kwang-sook(김광숙).