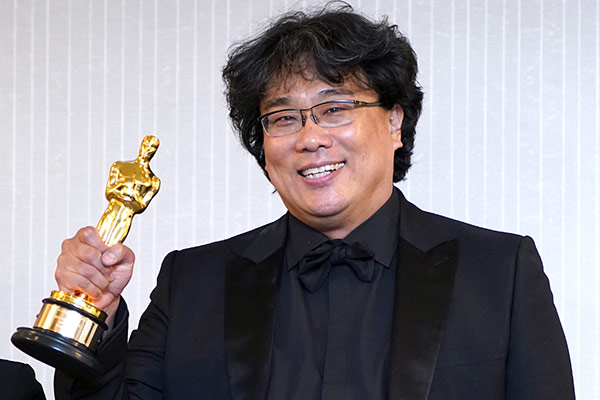 Director Bong Joon-ho’s film “Parasite” won four Oscars at the 92nd Academy Awards held on February 9th (US time) including best picture and director, showing the strength of Korean cinema to the world.

We talk about Hallyu, K-pop, K-movies etc., but we can say that their value as international topics has skyrocketed. This isn’t limited to the film industry, but also other industries such as tourism, distribution, consumer goods etc. to help raise Korea’s national brand value.  In terms of the film industry, the pay rate for not only the actors in film but also the production company will increase by 20~30%, bringing favorable conditions for the entire industry.

The 34 cm high Oscar statuette weighs about 3.8 kg and costs around 400 US dollars to make. But, the value of a film that is awarded this honor increases to no end. “Parasite” provided an opportunity for the world to reevaluate Korean films and furthermore, Korean culture. As it was the first time in the Academy’s 92-year history that a non-English film won Best Picture, the entire world’s eyes are on this film. Meanwhile, the short term economic surge for Academy Award winners, called the “Oscar Bump,” has begun as well.

An Oscar Bump is an economic surge and a positive chain effect that comes from winning an Academy Award. For example, when “Parasite” first opened in North America at the end of October last year, there were only three screens that showed the film. This was because many North Americans do not consider watching films with subtitles. But after “Parasite” started winning awards at various film festivals starting with Cannes, the number of screens increased to 200, to 400 even up to 900. There are now 2,000 screens that are scheduled to show the film just in North America alone. There is also an increase in the number of screens in Europe such as Norway and the UK. This means it will certainly make over two-hundred million dollars and my personal hope is that it will make over 300-million (or 300-billion won), setting a new record.

Most Academy Award winning films enjoy the Oscar bump effect to a certain degree. Last year, “Green Book'' won Best Picture around three months after its release. Since then, the film made $15.4 million, which is around one-sixth of the total earnings in the US.

“Parasite” premiered on May 30th last year in Korea. The total profits for the film in Korea and around 40 countries abroad last year amounted to $130 million. Currently, Parasite’s distributors around the world are working fast to increase the number of screens. The film’s British distributor increased the number of screens from 136 to 400, and countries such as Norway, Finland, and India are also increasing the number of showings. This, in turn, will add to the film’s international profits. However, the ripple effects for “Parasite” are not limited to the film industry.

The contents industry is related not only to the arts but also to tourism and distribution. We’re already hearing of tourists flocking to sites featured in “Parasite” and we’ll soon start to see a boom in consumer related goods. For example, there was a K-drama called “My Love from the Star”. The drama brought on a boom for the character’s clothes and shoes to the foods they ate. This sort of boom can lead to an enhancement for the Korea’s image and brand.

Sites where “Parasite” were filmed, including the small supermarket in Mapo-gu, the stairs at Jahamun Tunnel in Jongno-gu and the pizza store in Dongjak-gu have already been featured on Seoul City’s tourism website. And, there have been an increasing number of visitors from home and abroad to these filming locations.

The K-film boom can also lead to increased exports of consumer goods such as cosmetics, foods and apparel. For example, traditional Korean food or hansik became a trend thanks to BTS’ popularity in the US. The number of Korean restaurants in the US increased to 8,400 last year from around 5,000 in just two years.

Consumer goods exports for clothing, automobiles, home appliances, wireless devices etc. are being influenced by Hallyu. This is moving Korean contents into a new phase, or Hallyu 4.0.

Hallyu 1.0 was in the late 1990s to early 2000s. It’s when the drama “Winter Sonata” gained enormous popularity in Japan. Hallyu 2.0 is when K-pop began to take over the Southeast Asian market. We refer to Hallyu 3.0 as when K-pop’s stage shifted from Asia to North America and Europe thanks to stars like Psy and BTS. So, we are currently living in the age of Hallyu 3.0. So, what is Hallyu 4.0? This will occur when Korean contents become major players in moving capital and influencing production and distribution.

I think “Parasite” will provide the momentum for us to move into Hallyu 4.0.

Korea continuously evolved into a contents powerhouse since the 90s. With BTS’ popularity, K-pop has taken stage as mainstream music around the world while Korean dramas have swept the Asian market including China.

Bloomberg forecasted Parasite’s Oscar wins will become the momentum that drives Korea’s soft power to develop further. However, in order for us to move onto Hallyu 4.0, we need to become more proactive.

No one doubts the quality of K-pop or K-films anymore. But we must not stop at Hallyu 3.0, but move on to 4.0 where new venture and investment capital can come into the culture, media and contents sector to become main players. If not, we’ll just be relegated to working under Chinese or Jewish capital. In other words, we’ll just become puppets while the big players run the show. So, using “Parasite” as a stepping stone, Hallyu needs to step forward and take control of the production and distribution side of things.

If we elevate Korea’s soft power competitiveness to the world’s top rankings, the culture industry could become a driving force for the Korean economy. The key is re-creating Hallyu content through the convergence of culture and economy. When Hallyu is able to combine with emotions, art, technology and industry, K-contents will surely become Korea’s new export strength.