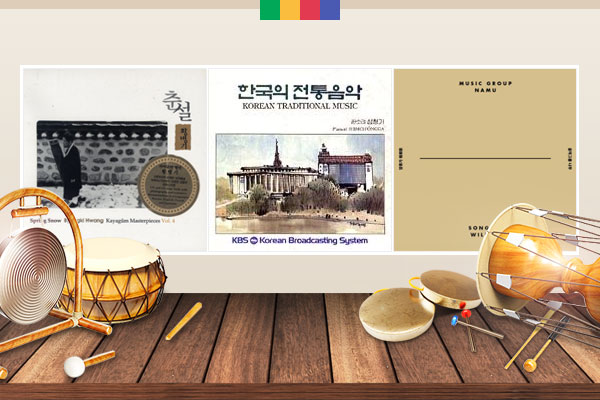 Ghut굿, a blanket term for Korean shamanistic rituals, was once suppressed as a superstitious practice that should be eradicated. But now, it’s become an intangible cultural heritage that deserves national protection. However people regard ghut, the practice contains life’s philosophy that ancient people used to understand nature, the world, and humanity. It is undeniable that the dances and music that accompanied these rituals leave deep influences in Korean folk performing arts. Young musicians of today have made various types of music inspired by ghut, and introduced it to the world as Korea’s interestingly unique type of music. The first music piece of today’s episode is “Yeongjeonggeori영정거리” performed by traditional music ensemble Akdan Gwangchil악단광칠. The term “yeongjeonggeori” refers to the process of warding off evil spirits. A ghut typically involves the invitation of a god and treating it to good food and merry entertainment. It is only natural that a house, where the rite is held, be cleaned thoroughly before receiving such a special guest. Invisible evil spirits are also chased away by a shaman priestess with the help of gods. The priestess’s plea for divine help is what “yeongjeonggeori” is about.

Ancient Koreans believed that each and every room of the house was protected by a god. Even the bathroom and chimney had a god of its own. During a ghut rite, it is important not to be disrespectful even to minor gods or evil spirits. They should be assuaged with food and songs before driven out of the house.

Akdan Gwangchil was formed in 2015, the 70th anniversary of Korea’s independence. The band’s music, inspired by the shaman music and folk songs of Hwanghae-do Province, has gained great fandom among the younger generation. Now we’ll enjoy a piece by the group Baraji바라지. Baraji, derived from a Korean word meaning support, refers to the musicians who support a shaman priestess during a ghut ceremony or their music. A wide range of religious music influences the group. This includes ghut music from Gyeonggi-do Province, the east coast and Buddhist songs. But its musical root is planted in the ghut of Jindo Island. More amazingly, many of its members come from long lines of shaman priests and priestesses. Today we’ll hear the group’s “Baraji Prayer,” adapted from the Jindo cleansing ritual. This ghut cleanses a dead person’s spirit and wishes it to go to heaven. But, before sending off the dead, the living has to be healthy and of sound mind to remember the dead for a long time. So a jeseokghut제석굿 ceremony is held for the living before the cleansing ghut ritual begins. This jeseokghut ceremony is to pay respect to the jeseok제석 god that supposedly decides a person’s lifespan and the destiny of the future generation.

Now let’s go over to the Gyeonggi경기 region and listen to the ghut music called “Pusal푸살.” The term “pusal” refers to undoing the works of bad spirits. Evil spirits are believed to curse a specific place or person, so pusal is performed to rid of these curses. This music piece is usually included in a set of ghut rituals performed when blessing a new house, or celebrating a happy event in a village. Today’s version of “Pusal” is featured in samulnori사물놀이 master Kim Deok-su’s김덕수 album titled “Cheongbae청배,” which means, ‘worshipping a god.’ The album contains ghut music from different regions of Korea.

The first two months of year 2020 are almost gone. Let us all get rid of bad energy with Pusal and begin the new spring with a fresh and positive spirit.