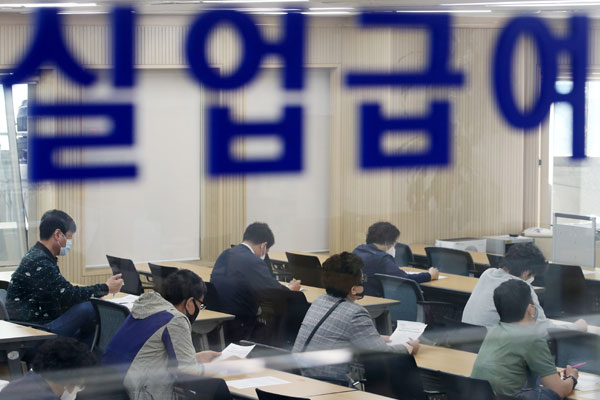 Statistics Korea said on Wednesday that the number of employed people in the nation reached 26-point-93 million in May.

It is down by 392-thousand from a year earlier and extends an on-year job loss rally to three months following declines of 476-thousand and 195-thousand in April and March, respectively.

It is the first such occurrence since the four-month run of job losses recorded from October 2009 to January 2010 during the global financial crisis.

The employment rate for those aged 15 or older slipped by one-point-three percentage points on-year to 60-point-two percent while the country's jobless rate rose by point-five percentage points to a record high four-and-a-half percent for the month.

First Vice Finance Minister Kim Yong-beom said while the labor market continues to face hardships, some positive changes were detected in May compared to March and April, including a rebound in the number of employed reflecting seasonal factors.

He also pointed to an uptick in the jobless rate and a fall in the employment rate, which despite their apparently negative ramifications could also indicate revived will by many to find jobs.

A drop in the number of temporarily laid-off people compared to the two previous months was also suggested as possible evidence of eased labor market conditions.