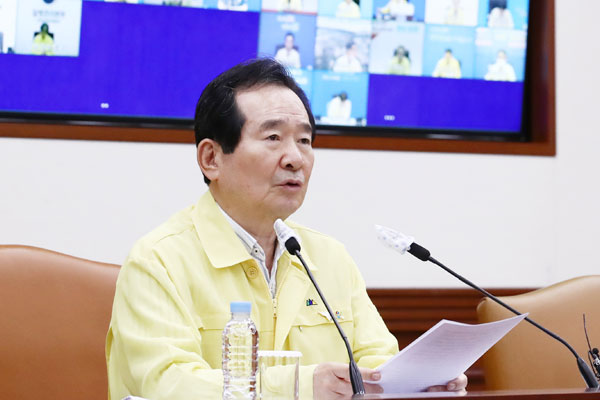 "The situation in the Seoul capital area has not improved since two weeks ago. Clusters have been reduced at high-risk facilities but mass infections and ensuing sequential infections continue to take place at small churches and multi-level marketing businesses outside of administrative control. Various indices show an increased risk as the ratio of confirmed infections in the quarantine grid fell while unidentified infections rose. Extending the strengthened quarantine measures before its planned expiration the day after tomorrow in the capital region is an unavoidable decision."

Without imposing complete lockdown measures, South Korea managed to flatten the curve, which at one point surpassed 900 infections a day in late February. The government ended its nationwide social distancing campaign in early May, but as sporadic outbreaks continued in the greater Seoul area, it was forced to reinstate strict quarantine measures, shutting down museums, parks and other high-risk public facilities through mid-June.

"As of midnight on June 12, 56 newly confirmed patients emerged and among them 43 were locally infected and 42 occurred in the capital area."

The two-week emergency campaign, however, didn't prove to be sufficiently effective. South Korea reported 56 additional coronavirus cases as of midnight Friday, and among them, 42 came from the Seoul metro region.

"To ensure swift epidemiological investigation and early isolation, more contact-tracing officials will be dispatched to work in close cooperation with the police rapid response team. At high risk facilities, electronic visitor registries will be adopted, including at cram schools and computer game rooms in the capital region. The system will be actively recommended at other places to make sure visitors can be swiftly identified."

"If the chain of mass infections are not terminated, our society will have to face greater pain and time for patience. Daily routines will again shrink and economic activities will be contracted to make lives tougher for the working-class and disrupt the school work of our children and their joy of school days. Please, abstain from unnecessary gatherings and outings."

Until the daily COVID-19 tally falls below ten, some eight-thousand public facilities will stay closed while QR-code-based visitor registry will be required at bars, clubs, cram schools and internet cafes.