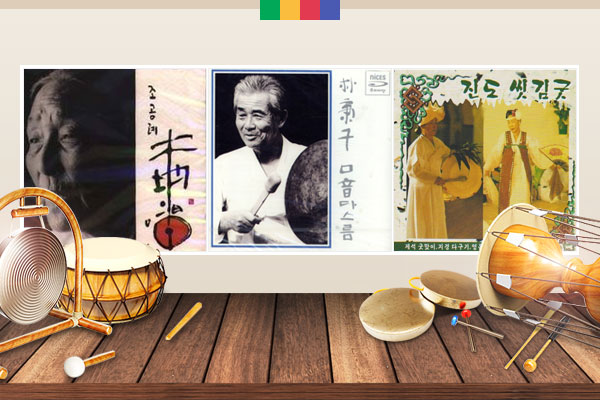 Jindo in southern South Korea is known to have produced a host of master singers and intangible cultural properties with exceptional singing talents. Today’s episode of Sounds of Korea introduces three master singers from Jindo. The first is Cho Gong-rae조공례, the practitioner of southern field songs. She wasn’t trained in vocal music, but her father was a known partyer in his village. Cho Gong-rae grew up listening to her father singing Ganggangsulle, the funeral bier song, along with other songs as well. When she sang those songs as an adult, her amazing talent was recognized and came to be designated as Korea’s intangible cultural property. Imagine how much hardship she must have endured to become such a soulful singer. Her life was filled with all sorts of trials and tribulations. She got married at a very young age so she wouldn’t be forced to become a sex slave for the Japanese army during World War II. However, her marriage was rocky and her in-laws were harsh. Her husband, who came back from the war, cheated on her and she had to make a living for her young children by selling shrimp sauce. Her heartbreaking voice came from those painful experiences. Let’s listen to Cho Gong-rae singing “A Mill Song.”

Poet Kwak Jae-gu wrote a poem titled “The Torn Upper Lip of Cho Gong-rae” when he heard about her poignant life story. The poem describes how her husband battered her lips with a rock because she kept practicing music without tending to his needs. Her emotional voice came from such bitter experiences.

Now let’s talk about Park Byung-chun박병천. Earlier in the program, Jindo was referred to be the home of many intangible cultural properties. In fact, four intangible cultural properties came from Jindo, and Park Byung-chun played a pivotal role in discovering and publicizing them. Jindo is famous as the home of hereditary shamans. That means that the job of a shaman is passed down within a family, from one generation to the next. Korean shamans tend to sing and dance a lot during their rituals, so it isn’t any surprise that their descendants are born with those artistic talents. Park Jong-ki박종기, the creator of free-style daegeum solos, was also from a shaman family in Jindo and Park Byung-chun was one of his grandchildren. People would seek help from the shamans when they were in trouble, but would often look down on them once their issues were solved. Park Byung-chun didn’t like the way his family was treated, so he decided to take a different career, such as selling rice. But he could not sever his ties to music. He started gaining national attention in the 1970s when he began winning awards by singing folksongs from Jindo. He was hugely popular, aided by his good looks, incredible voice and dominating stage presence. Here’s Park Byung-chun singing “Eotmori Prayer.”

Master singer Kim Dae-rye was the practitioner of the Jindo cleansing ceremony. Her mother’s family was hereditary shamans and she was actually related to the aforementioned Park Jong-ki, as he was her maternal grandfather. Shamans and musicians from Jindo are almost always related. Kim Dae-rye’s mother took her to shaman rituals since she was three years old. While her mother was presiding over the ceremony, she would play with her siblings and unknowingly learn shaman songs and dances. Her beautiful appearance and voice made her quite popular among the general public. She was quite talented not only in the Jindo cleansing ritual, but in all shamanistic services. The last piece for today’s episode is “The Ceremony for Jeseoksin제석신.” Jeseoksin is the god of people’s lifespans, fates, and farming. This ceremony prays for Jeseoksin to bless everyone on this earth. Here is Kim Dae-rye singing “The Ceremony for Jeseoksin.”