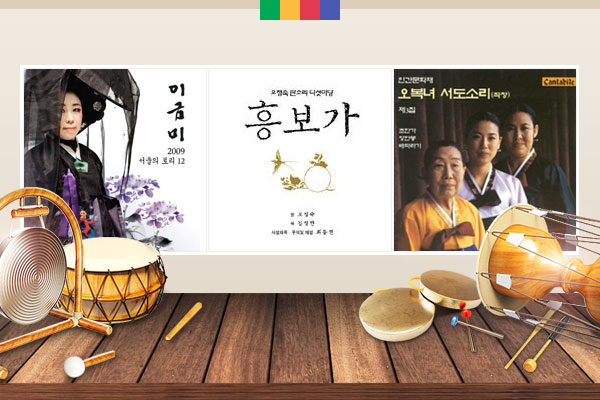 The Gyeonggi folksong “Chulinga출인가” was inspired by Chunhyang and Lee Mong-ryong’s parting at Orijeong오리정 Pavilion. The pavilion was located about 20 kilometers away from the town magistrate office, and town officials used to greet or see off special guests at that site. Chunhyang must have mustered up a lot of courage to go out to the pavilion that saw a lot of foot traffic. In “Chulinga,” Chunhyang goes out to Orijeong Pavilion to see off her beloved, Mong-ryong, with a simple food spread. Here is the passage that describes the sort of foods taken to the pavilion.

Chili peppers and kimchi were common back in those days, but octopus and abalones were specialties that are highly valued even today. Chunhyang even brought honeyed wine to mark his departure. You can see how lovingly she prepared this food for her loved one. Here’s Lee Geum-mi singing “Chulinga.”

The Korean word for family is “sikgu,” which means people who eat together. In the old days, when food was not as plentiful as today, sharing food was tantamount to sharing a life together, much like a family.

In pansori “Heungboga흥보가” there is a part where the newly wealthy Heungbo is visited by his big brother Nolbo놀보. Heungbo’s wife, remembering how awful Nolbo was to her husband when they were poor, detests her brother-in-law, but begrudgingly offers him a meal just because he’s family. That passage describes an assortment of expensive, luxurious tableware, such as brassware from Anseong, lacquered plates from Tongyeong, silverware, a copper grill, a container inlaid with mother-of-pearl, and bowls imported from China. She also serves a variety of delicious foods in those dishes, from rice cakes and meat to seafood and mountain herbs. Such an extravagant meal could have meant that she was fulfilling her duty to her brother-in-law but also could have meant to show off that they were living better off than the greedy Nolbo. Let’s listen to the passage from pansori “Heungboga” where Heungbo’s wife prepares these dishes for Nolbo, by traditional singer Oh Jeong-sook.

A bronze brazier containing quality charcoal is fired up.

A fatty beef side is sliced with a well-sharpened knife.

And portion them out in different plates.

Then put mountain herbs, bracken, watercress, and savory broth in the meat

Drop the steel chopsticks lest you should burn your hand.

Pick up the wooden chopsticks instead.

Take a piece of meat and dip it in the delicious sauce before devouring it.

Doesn’t that sound mouthwatering? You can almost taste the juicy marinated meat melting in your mouth. It’s interesting to find out how people in the old days cooked and enjoyed food from such musical passages. Koreans greet each other by asking whether they have eaten and thank others by offering to treat them to a meal. Eating food together is an important behavior that strengthens interpersonal relationships. Food is also a crucial element in memorial services where the living offers food to the deceased ancestors. Western folksong “Jejeong제전” is about a young widow visiting her late husband’s grave to set a memorial table with carefully prepared ceremonial dishes.