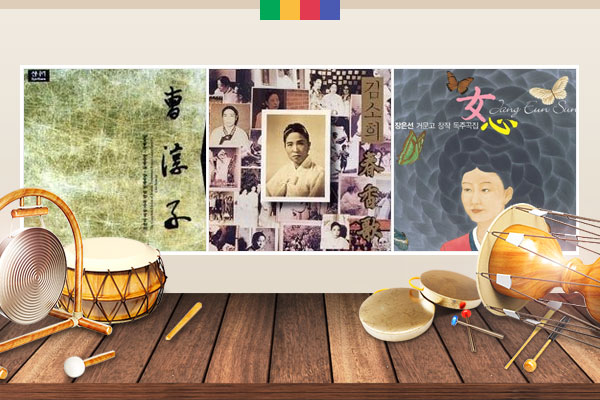 Handwritten letters are hard to find these days, as people prefer easier and faster forms of communication such as phone calls or text messages. Nowadays, even soldiers are allowed to use mobile phones, so the practice of sending hand-written letters to servicemen and women to boost their morale and express our gratitude for their service has become long outdated. But hand-written letters give off a certain nostalgic vibe that no phone calls, emails or SNS messages can.

with an open view of the emerald-colored sky.

This is the first line from poet Yu Chi-hwan’s poem “Happiness.” There were times when happiness was writing down one’s feelings while thinking of a loved one and waiting for the letter to be answered by the beloved. Today’s “Sounds of Korea” episode is about music inspired by letters. The first song we’re going to enjoy today is “Banyeop반엽.” This poem-based song tells the recipient to not hire someone to deliver his letter but to bring it himself. Here’s Jo Sun-ja to sing today’s rendition of “Banyeop.”

Korean lyrical songs named “gagok가곡” are much slower than today’s K-pop songs and their lyrics are too archaic for modern listeners to understand. But that is exactly why listeners must pay closer attention to the melodies and lyrics to find out the messages these gagok pieces are trying to deliver. Next up is a passage from pansori “Chunhyangga춘향가” where the undercover government inspector is reading a letter from Chunhyang. Chunhyang’s love, Lee Mong-ryong이몽룡, becomes a secret inspector after acing the government test. In the old days when there were no telephones or internet connections, once a government official was sent to a local government post, there was no way to check up on him to see whether he was fulfilling his duties properly. So the king sent undercover government inspectors to find out whether officials are doing a good job at governing. Secret inspectors disguise themselves as commoners and conducts clandestine investigations on local officials. If corrupt or incompetent government workers are found, they are punished by the inspectors on behalf of the king. One secret inspector, Lee Mong-ryong, was on his way to his hometown Namwon when he happened to run into Bangja방자, his servant who was carrying a letter from the imprisoned Chunhyang. Unaware that the man was his master Lee Mong-ryong, Bangja was coaxed into showing him Chunhyang’s letter. It began with the girl’s lamentation on how Lee Mong-ryon had not written a single letter in three years. And then it went on to say that even if she dies at the hands of the new town magistrate, he should go on living a good life. Mong-ryong must have felt chills running down his spine while reading such a spiteful letter. Here’s Kim So-hee singing that passage from pansori “Chunhyangga.”

Now let’s take a look at a letter that the Joseon-era scholar and writer Heo Gyun허균 sent to a gisaeng named Maechang매창. Although they were from different social backgrounds, they were good friends. But people spread rumors of Maechang and Heo Gyun having an illicit relationship after she was spotted crying for someone. After hearing of that gossip himself, Heo Gyun wrote a letter to Maechang, scolding her of behaving inappropriately in view of other people. This week’s episode of Sounds of Korea concludes with “Sanjagosae산자고새,” based on this story of Heo Gyun and Maechang, with Jang Eun-sun playing the geomungo거문고 and Sohn Beom-ju the saenghwang생황.