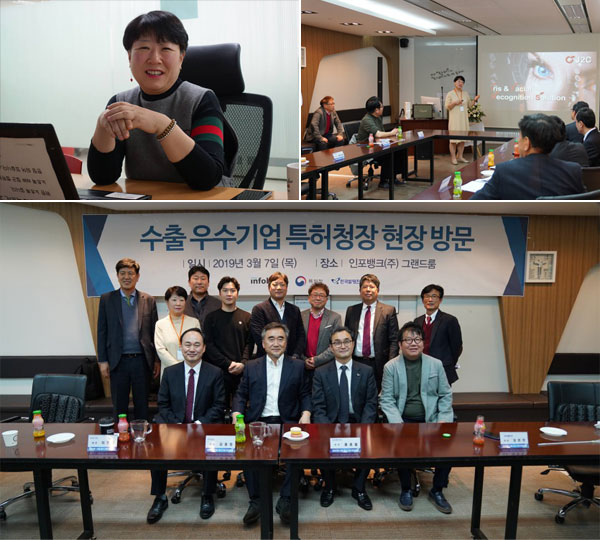 The irises of a person are formed a month after birth. Once the iris patterns are complete, they never change throughout one’s life. The patterns are unique to each person. Today, there are 7.7 billion people on earth. Even if there were six more earths with the same population for each of them, it is hard to find people with the same iris. That is, it is almost impossible to replicate iris patterns.

Iris recognition is used for personal identification. We still have a long way to go, due to various regulations about iris authentication. But our technology can be applied to a portable iris scanner as well as entrance-exit control. At present, we’re developing an iris recognition module for smartwatches connected to mobile phones.

Kim has been working in the iris recognition industry for nearly 20 years. She established J2C in September 2015, based on her expertise she had developed for years. While working part-time at a lens polishing factory in her early 20s, she happened to learn optics and optical path engineering, which is essential to iris recognition technology. Fascinated with this field, she began to research relevant technology and came to the conclusion that iris recognition is the best form of biometric security technology.

A monocular iris recognition device is the first example of applying our own optical components. This device is portable and can also be built in other equipment. We provide this product to India, where the iris database has been established. When public officials distribute supplies to poor people, they need to verify the identification of the recipients. But how? Fingerprints of workers may wear away after years of manual labor. Facial recognition may not work, either, as faces change over time. It is little wonder that these methods have high rates of error. Iris could be the answer. Public officials in India use our iris recognition solution to identify people and provide them with necessary supplies.

The iris is nearly impossible to duplicate and its false rejection rate is far lower than that of other biometric modalities. The false rejection rate refers to the likelihood of a biometric security system incorrectly rejecting an access attempt by an authorized user. It measures the accuracy of an identification service. The false rejection rate for fingerprint recognition is 0.1 percent, while the rates for palm and facial recognition are 0.01 percent and 1 percent, respectively. In comparison, the rate for iris recognition is 0.0001 percent. According to the Financial Security Institute, there is very little probability, like 0.000083 percent, that the irises of two different people match.

Despite the high level of security, iris recognition has been shunned in the market. An iris scanning feature was embedded in a smartphone in 2016, but the latest model released this year does not have it. In August, some banks in Korea also stopped providing their iris recognition service.

The iris recognition market remains sluggish due to the low recognition rate and high prices. Actually, many consumers can’t afford to get the relevant service. But we managed to resolve the problems last year.

J2C found a breakthrough in hardware. Iris recognition algorithms were already available in the market, but it was difficult to find hardware capable of recognizing clear iris images. Some hardware, even if found, was highly expensive. Noting this, J2C developed its own camera module and infrared or IR-LED, which are key parts of an iris recognition device to capture accurate iris images. The IR-LED module can produce twice as much light with less current, so the device can recognize the iris more accurately and from a longer distance.

We were able to develop a camera module optimized for iris images. It can capture the iris, which is about 1 centimeter in diameter, at a 250-pixel resolution, compared to a mere 70 pixels offered by-products of our rival firms. Our successful IR-LED package technology is effective in gathering light and reducing the viewing angle so the light will not spread but go straight. This enables the iris recognition system to work at a longer distance. Our IR-LED module can enhance the brightness of the light with a small amount of electricity. So, the cost will not go up much even if we use a lot of LED. That’s how we cut the cost.

J2C holds 22 domestic and foreign patents. In recognition of its technology, the company participated in the Consumer Electronics Show early this year. It has joined a government-led startup accelerator program and also carries out a development project at the Tech Incubator Program for Startups, which is designed to promote technological startups with private investment.

The company is spurring efforts to explore overseas markets as well. It set up a branch in the U.S. in October and opened an English website to introduce its own iris recognition hardware and software technology to the global market. J2C is working hard to grow further. But its ultimate goal is to be fully committed to research and development. 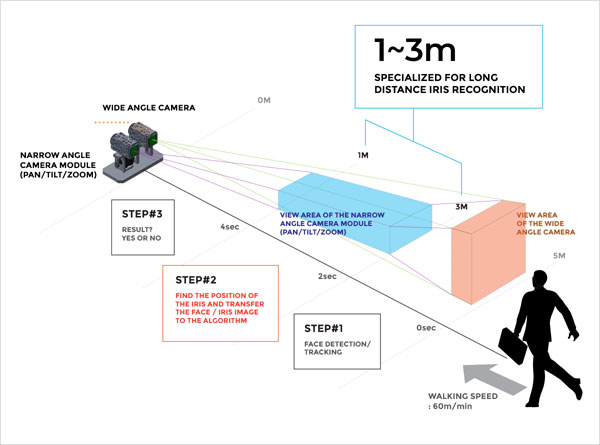 J2C hopes to become a company dedicated solely to R&D, without having to worry about management or personnel. To this end, we’ll have to make a merger and acquisition deal with a large company in the U.S. or other countries. We’re working on safe and convenient services that consumers can easily access. I’m sure we can release them pretty soon.

For personal identification, facial recognition has become rather inconvenient because the COVID-19 pandemic forces people to wear facial masks. In the cold winter, people may not want to bother to take off their gloves for fingerprint recognition. A wide use of iris recognition will improve these shortcomings and make our lives more convenient. J2C is advancing a world like this little by little through constant technological development. We have high hopes for the future of this company, which will expand its presence in the global iris recognition market.