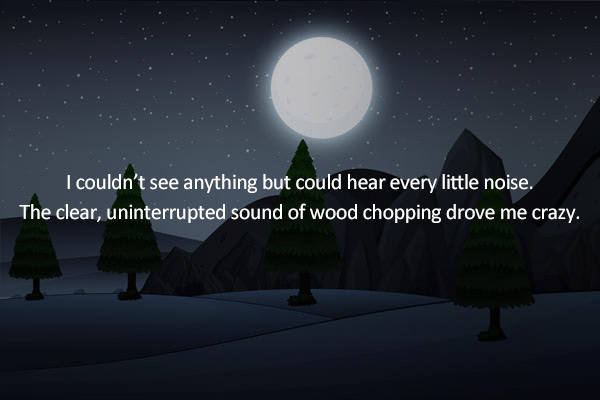 One winter day, the furnace pipe got clogged, turning the rooms cold and water icy. The boy’s mother nagged her husband to get some pine branches.

I couldn’t see anything but could hear every little noise. The clear, uninterrupted sound of wood chopping drove me crazy.

Father was in too much of a rush. As if he was looking to get caught in the act, he was making so much noise that the quiet and sleepy Soradan was about to be shaken awake.

An abrupt holler accompanying a flashlight beam made my father freeze on the spot.

“Turn off that flashlight first.” (Father)

“Shut up and take out your resident ID card.”

“Who are you to demand my ID?”

“Can’t you tell who I am? I’m the forest guard of Soradan.”

“Hey, stop accusing me of committing a crime.”

Around the time of the Korean War, Koreans were issued a resident card. But those who were known to be either ideologically different or related to someone who is could not get one, and the narrator’s father was among them. Unable to find a decent job and with the money running out, the boy’s father attempted to steal firewood when he was caught by the forest guard. A more likely story is that the father sent away the son before pleading with the guard to let this slide by. The father must have felt very ashamed to have been caught while doing something illegal and admonished in front of his son. So, he tells a different story to the boy, who doesn’t let on that he is somehow aware of his father’s lies.

“What are you still doing here? I told you to go home.”

I had no answers for my father’s scolding.

“You saw that, too, right? How I dressed down that impudent forest guard? I told him that I don’t usually go around chopping firewood in the middle of the night and look what he did. He offered to give me some firewood and even loaded them up on my back rack.”

For some unknown reason, I was glad that I ran away alone and hid here.

“You can tell your mother what you saw here, how your father gave a sound tongue lashing to that rude forest guard.”

: Debuted by publishing “The Season of a Gray Crown of Thorns” on Hankook Ilbo in 1968