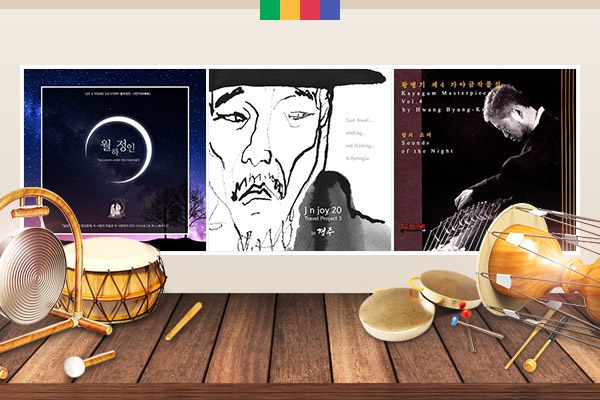 Year 2021 has arrived and everyone around the world is ready to make a fresh start. We all hope that the pandemic would end in 2021 and that our lives can return to normal, pre-COVID days. Sounds of Korea promises to bring you more traditional music of Korea in the new year as well. Two most admired painters of the Joseon period are Kim Hong-do김홍도 and Shin Yun-bok신윤복. But their painting styles varied considerably. Kim Hong-do’s painting subjects were more diverse, depicting royal ceremonies as well as beautiful sceneries and everyday lives of ordinary people. Meanwhile, Shin Yun-bok usually painted gentlemen enjoying recreational activities or female entertainers performing for noblemen. One of Shin’s notable works include a painting titled “Wolhajeongin월하정인,” which means lovers under the moon. It shows a gentleman holding a lantern and a woman with a skirt over her head standing in the moonlight. The two look like they’re headed out somewhere. People often wonder where they’re going, and as if answering their curiosity, the writing on the painting says, “In the middle of the night when even the moonlight is dim, only the two lovers know their intention.” The atmosphere of intimacy and secretiveness created in the painting fascinated countless people over the centuries and inspired a large number of musicians to write diverse music pieces. The first song for this week’s Sounds of Korea is “Lovers Under the Moon” sung by Park Ae-ri and Kim Jun-su.

Music 1: Lovers Under the Moon/ Sung by Park Ae-ri and Kim Jun-su

Next up is a piece inspired by painter Park Dae-sung박대성, known as the master of modern ink-and-wash paintings. Park’s parents died during the Korean War when he was only five years old. He also lost his left arm during the war. Imagine how hard it must have been for a young, handicapped child to survive in that tough time. He just finished middle school before learning to paint on his own. It took incredible talent and a lot of effort to succeed as a painter, but he was able to carve out his own place in the art world by developing a unique painting style unaffected by standardized education. In 2019 Actor Yoo Jun-sang, also working as a music composer, released an album featuring 11 modern gugak pieces inspired by Park’s drawings. The piece coming up next is titled “To See as a Bird,” inspired by Park’s painting “Cheon Ji In천지인,” which means heaven, earth and man. The painting depicts an eagle’s view of Geumgangsan Mountain. The majestic boulders and soaring peaks of Mount Geumgang are arranged in a semi-circle that represents Eastern philosophy’s concept of the universe. Here’s Yoo Jun-sang’s “To See as a Bird” with Lee Mi-ran playing the haegeum and Jang Young-soo the daegeum.

Music 2: To See as a Bird/ Haegeum by Lee Mi-ran, daegeum by Jang Young-soo

This week’s “Sounds of Korea” will conclude with “Sound of the Night” written by gayageum virtuoso Hwang Byung-ki. This gayageum piece was inspired by late Joseon-era painter Ahn Juk-si’s안죽시 “Seongjaesugando성재수간도.” This ink painting depicts an errand boy staring between two trees to look for the source of a loud sound. The story behind this painting involves a Chinese poet and historian from the Song Dynasty, who hears a sound in the middle of the night. The mysterious sound grew louder, prompting the master to send an errand boy to look what is happening outside. The boy returns to tell him that the moon and the stars were shining bright and the sound was coming from between the trees. The historian realizes that it was the sound of autumn. The painting shows a boy’s hair and clothes billowing in the wind and bamboo trees standing right outside the room. The proximity of the bamboo trees rustling in the wind and the master’s room must have made the sound even louder and more ominous. Gayageum virtuoso Hwang Byung-ki started writing music immediately after seeing this painting in a recording studio. That piece is “Sound of the Night” about a person wishing to have a guest one autumn night. Hwang Byung-ki himself performs today’s rendition of “Sound of the Night.”

Music 3: Sound of the Night/ Gayageum by Hwang Byung-ki