"Out of Focus" by Kim Hye-jin 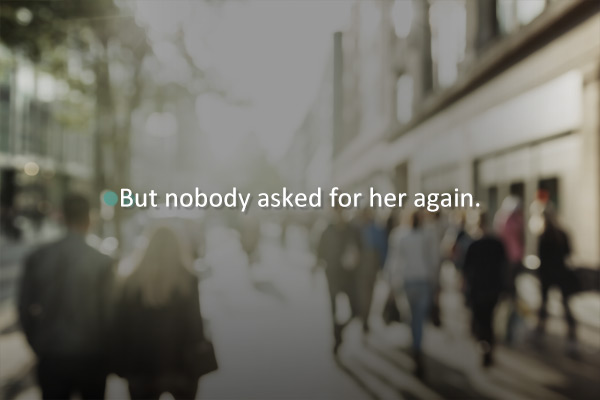 Mother ate lunch alone like her fired co-workers had done and stared at people’s backs when not on the phone.

That was when she realized that her name was on the list.

Not long after Ju-ho’s mother was given a pink slip.

Mother stood at the front entrance of the building all day long. She trained her body to do the new job.

Her new job was to count the floors and then count the windows to find her former office and stare at it all day.

The closely spaced windows were all of the same size and shape. Just when she thought she had spotted the right window, her former office oftentimes hid and disappeared among the same windows.

But nobody asked for her again. Her co-workers looked away from her when they entered the building or pretended to focus on their phones. Some co-workers went to work before Mother came and went home after Mother left.

She remained unflappable despite that. She stayed there every day.

The story’s title is “Out of Focus,” which refers to a cinematography technic in which the subject is made blurry by not focusing on it. This out of focus technique is compared to the isolated lives of modern men. For instance, ever since Ju-ho’s mother is put on the layoff list, she is treated like a ghost. Her desk has been moved out of the building and nobody paid attention to her. We can see such sentences repeated many times in the text. These sentences show how Ju-ho’s mother is being moved out of focus by society, her co-workers, and even her family.

: Debuted by winning in the Dong-A Ilbo Spring Writing Contest with “Chicken Run” in 2012

Won the JoongAng Literary Award in 2013