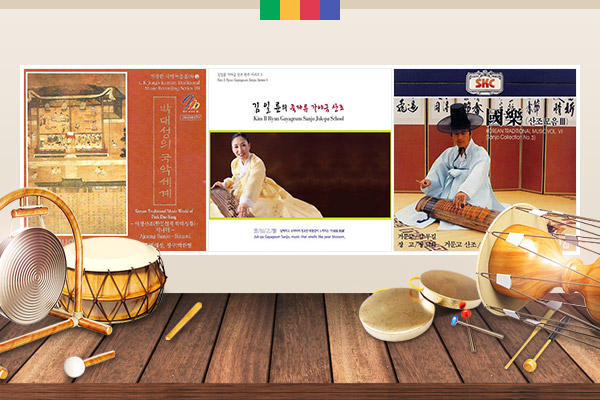 Confucian scholars of Korea called “seonbi선비” enjoyed having geomungo as their musical companions. Not all of them knew how to play Korea’s iconic string instrument, but they all knew how to enjoy it. There was such a thing as “muhyeongeum무현금,” a geomungo without strings. The purpose of having this soundless instrument was to imagine its tone in your mind. If you imagine yourself sitting in a peaceful garden with gentle breezes moving the geomungo strings, you would feel like you’ve become a heavenly being living in paradise. If jeongak정악, or courtly music makes people feel noble and composed, folk music tends to excite and cheer up people. One such musical discipline is ajaeng sanjo아쟁산조. Ajaeng is a zither-like instrument played by drawing a bow across the strings. The sound of the bow moving across the strings is rough and trembling, sometimes making you feel like it’s your heart that’s being played. Let’s listen to Park Dae-sung and Park Hwan-young playing “Jinyangjo진양조” from ajaeng sanjo.

That was “Jinyangjo” with Park Dae-sung at the ajaeng and Park Hwan-young at the janggu. Sanjo was first developed toward the end of the 1800s by gayageum virtuoso Kim Chang-jo김창조 from the town of Yeongam영암. It is documented that gayageum sanjo pieces were played by other musicians around the same time, so the genre is suspected to have been rearranged from folk music pieces like sinawi시나위 or pansori판소리 rather than being an entirely new creation. Sanjo pieces are slow to start but gradually pick up in cadence while a musician plays freestyle melodies. It is not surprising that such music sounded very new to people back then. The development of sanjo pieces resulted in a slew of sanjo melodies for different instruments like geomungo, daegeum, haegeum, piri and more. Sanjo pieces are played not only in basic rhythms, such as jungmori중모리 or jajinmori자진모리, but also in diversified beats such as gutgeori굿거리, hwimori휘모리 and sesanjosi세산조시, to produce even richer music. Coming up next is a couple of gayageum sanjo pieces titled “Sesanjosi세산조시,” which is played at the very end of a long sanjo piece as well as “Dwitdaseureum뒷다스름,” a calming piece that draws a performance to a close. Kim Il-ryun plays the gayageum and Jang Jong-min the janggu.

Sanjo began as freestyle music, but each musician created his own unique tunes. Their students learned to add their own touches to what they had learned from their teachers, so sanjo was taught without fixed methods from one generation to the next. Having accumulated generations of sounds, a sanjo piece might sometimes take more than an hour to play. But it can also be reduced down to less than ten minutes. Also, sanjo pieces can be classified into specific styles named after famed musicians. For instance, there are Kim Juk-pa김죽파 style gayageum sanjo and Shin Kwae-dong신쾌동 style geomungo sanjo. Naming a sanjo style after someone is a way of expressing people’s respect for that musician. The last piece for today’s Sounds of Korea episode is a geomungo sanjo. Geomungo was long considered the instrument of seonbi. As mentioned in the earlier part of this show, seonbi sometimes just hung a geomungo on the wall to hear the subtle sound of the wind passing through the strings or played the instrument to bring peace to their minds. This is why the geomungo was not considered the right instrument for folk music which tends to express bursts of emotions. But when geomungo was used to play sanjo pieces, geomungo traditionalists believed that the end of their beloved instrument was near and deplored the seemingly haphazardness of sanjo. Nowadays, however, many people came to love the melodies of geomungo sanjo which can be powerful as well as intricate. Today’s episode will conclude with geomungo virtuoso Kim Moo-gil playing “Jajinmori” from Shin Kwae-dong신쾌동 style geomungo sanjo.