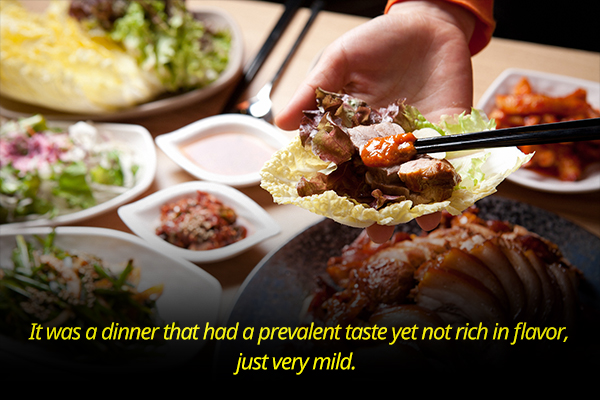 It wasn’t just the relationship between the hardware store owner and Mr. Choi. Gyu-ri had to hear uncomfortable stories that she’d rather not hear about.

Like how the old man at the supermarket grills pigeons and feeds them to his dog, or how the laundromat owner up the street urinated on the walls of another laundromat down the street. She had to hear endless stories that could not be verified.

It was very tiring to unintentionally come to know of other people’s business.

Gyu-ri came to like having meals with Dr. Han, who was casual and considerate without being overly friendly. The relationship between a doctor and an employee, between an older classmate and a younger one, was contained together yet separate in one bowl, like school lunch on a sectioned tray. Naughty mischiefs that were considered too childish for a grownup returned to their mealtime. They engaged in a chopstick war over a plate of seafood pancake so that one could have more of the crispy edge. The doctor often made lame jokes that were neither trendy nor timely.

“Do you know why people come to our clinic?”

“To be blessed with good fortune?”

“Nope. They come because they’re sick. Why would they come to the clinic if they weren’t?”

Gyu-ri felt uncomfortable seeing the world of grownups that she couldn’t see when she was little. But she came to accept the discomfort and finally understand what adults go through. The story intended to show how the main character matures in her perception of the world and her understanding of the people around her. She learns that neighborhood residents, even her friend, were hurting not only physically but also psychologically. What makes this story so interesting is that the sufferings of these people are represented in one setting.

She actually wanted to ask if her sorry state would get better but toned down the self-deprecation.

Gyu-ri wanted to say that she wouldn’t know even when she was 63 and he was 67 but stopped herself from saying it out loud.

“Should we try going to church?”

“Because Jesus who achieved his goal at age 34 may be bored.”

Dr. Han smiled as he cocked his head. Gyu-ri remembered that he used to cock his head like that when the teenage Han Yong-su tried to play “Recuerdos de la Alhambra” with the guitar and kept getting the notes wrong. It was memory from far away yet also near.

Dr. Han and Gyu-ri finished their meal while agreeing that the delicious pig trotter they had enjoyed must be good for their skin.

It was a dinner that had a prevalent taste yet not rich in flavor, just very mild.