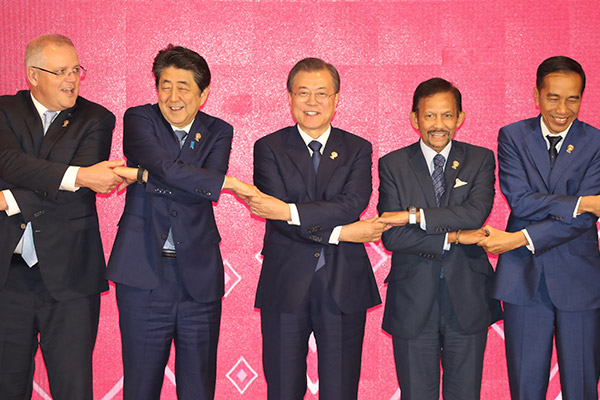 On November 4th, fifteen Asia-Pacific countries, including South Korea, reached a meaningful agreement on a multilateral free trade agreement known as the Regional Comprehensive Economic Partnership or RCEP in the Thai capital of Bangkok. Seven years after the trade talks started, the countries agreed to formally sign the deal in 2020. Today, we’ll discuss the implications of this trade pact with Kim Dae-ho, director of the Global Economic Research Institute.

An FTA can be signed between two countries but multilateral FTAs covering many more countries have also been concluded. RCEP is the largest such multilateral trade accord in Asia. Its members include populous countries like China, India and Japan. The trade pact involves a huge economic bloc that accounts for nearly half of the world’s population and one-third of the world’s total GDP.

RCEP is a mega FTA that covers ten member states of the Association of Southeast Asian Nations and six more countries including South Korea, China, Japan, Australia, New Zealand and India. Their combined population of 3.6 billion accounts for 48 percent of the world’s entire population. According to the International Monetary Fund, the total economic size of the 16 countries was 25 trillion US dollars in 2017 or one-third of global GDP. On a more promising note, RCEP participants post higher growth rates than advanced economies like the U.S. and European countries, and many of them have young populations. That’s why the region is being called a new growth engine for international trade.

Efforts to bring this huge market together started in 2012, and the first round of negotiations for the China-led trade deal began in 2013. After years of discussions, 15 countries, except for India, agreed on the terms of the trade pact last week.

Trade protectionism has been spreading throughout the world, with some countries engaging in fierce trade wars, especially since the inauguration of U.S. President Donald Trump. As a result, FTAs advocating for the spirit of free trade have turned into a mere scrap of paper, while international trade is dominated by the law of the jungle, where the strong force the weak to lower tariffs and open their markets.

Against this backdrop, the provisional conclusion of RCEP represents a return to free trade against protectionism, which I think is a significant step for the global economy.

As seen in the ongoing trade dispute between the U.S. and China, the winds of protectionism have become violent on the global trade front. The recent agreement on the comprehensive and mutually-beneficial RCEP shows that the members have stood up for the spirit of free trade.

For Korea, in particular, the regional trade deal is expected to ease economic uncertainties that have grown in the aftermath of the intensifying trade conflict between the U.S. and China.

The deal is expected to help Korea expand the scope of its economic exchanges by increasing its export and import destinations considerably. On the trade front, Korea relies too heavily on China and the U.S. for its exports. Therefore, any economic dispute between the two largest economies will have a major impact on Korea. However, if RCEP comes into effect, Korea will be able to diversify its export markets into places like India, Indonesia, Vietnam, the Philippines, New Zealand and Australia. Of course, Korea may sell its goods in those countries without RCEP. But it has to hold trade negotiations with each country. By using RCEP, Korea can export and import products to and from the 15 countries more easily and effectively.

According to the Korea Economic Research Institute, the signing of RCEP will add an annual average of 1.1 percent to Korea’s GDP, or 1.1 billion US dollars in consumer benefits, to improve the current account balance by 28.7 billion dollars in the mid to long-term. Korean manufacturers of electrical and electronic products, as well as automobiles, will benefit from lower trade barriers and therefore increase their exports to the 15 countries. RCEP is also expected to boost investment in the service industry as well.

However, the conclusion of the trade pact may have a negative impact on some Korean industries.

Many of the RCEP members are agricultural countries that have a competitive edge in the farming industry.

Vietnam and Thailand, for example, are famous for their rice production. There are concerns that RCEP may negatively affect South Korea’s relatively uncompetitive agricultural industry, which will be vulnerable to markets opening.

According to the Korea Rural Economic Institute, South Korea exported farming products worth 3.15 billion dollars to RCEP countries in 2015, while imports of agricultural products from the region amounted to 6.68 billion dollars. In this situation, the conclusion of RCEP is expected to negatively influence Korean farmers who produce barley, sweet potatoes, napa cabbage, onions and garlic.

Another problem is India’s rejection of last week’s agreement. India was rather passive about RCEP, out of fear regarding the possibility of a massive inflow of low-priced Chinese products entering the country. But other RCEP participants plan to continue to negotiate with India to induce it to sign the deal next year. It seems there is still a long way to go before the final conclusion of the pact.

It’s hard to say that the agreement is fully complete. On the contrary, Korea has some important tasks to do now. It should make thorough preparations for tariff adjustments in a way to maximize its benefits and minimize potential damage from RCEP. I think Korea needs to fully explain its agricultural situation to other members and persuade them to give Korea a grace period, just as the country has retained its developing country status in the field of agriculture in World Trade Organization negotiations for a long time. It will also be necessary to negotiate over specific terms concerning each sector.

Since the RCEP discussions started in 2012, the participants have held 28 rounds of official negotiations, 16 ministerial conferences and three summit meetings to flesh out details for the multilateral free trade agreement. After seven long years of discussions, they have now produced a meaningful result.

Still, they will have to make more efforts to come up with precise plans and engage in sincere discussions in order to achieve common prosperity in the Asia-Pacific region.