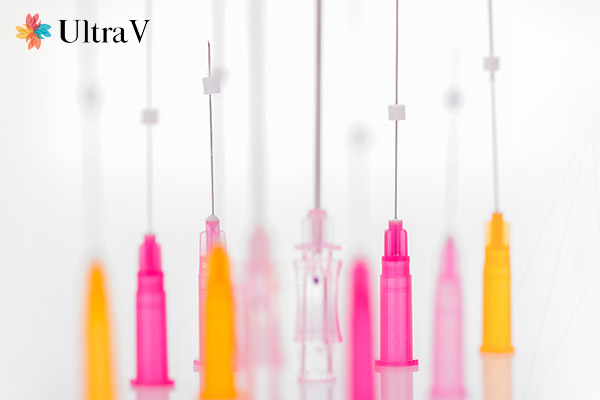 Ultra V is widely known as a cosmetics company. But we also produce biomedical devices including dermal fillers. We provide absorbable threads used in medical applications as well as other medical aesthetic equipment to some 500 clinics here in Korea.

Ultra V is a famous brand of the so-called “thread lift.” When you enter a search request for “Ultra V line” in Google, it displays 700 to 800 million search results.

Ultra V was able to grow into a global beauty brand, only ten years after its foundation in 2012. Much of the credit for the remarkable growth should be given to biodegradable threads known as polydioxanone or PDO.

Doctors use surgical threads to stitch a wound shut. If the threads do not absorb into the body, and if they suture the wound on internal organs, they have to cut the abdomen open again in a week or so to take out the stitches. But absorbable threads dissolve and disappear in six to eight months so the doctors don’t have to perform incisional surgery again.

Our absorbable threads proved successful because safety is considered one of the most important elements in beauty treatment these days. Last year, doctors not only from Asia but from other parts of the world including Brazil, the U.S., Australia, Britain and Spain visited us. They wouldn’t be bothered to come all the way to Korea if there was nothing special about us.

As our products have consistently been upgraded with new techniques, they have become increasingly famous worldwide. 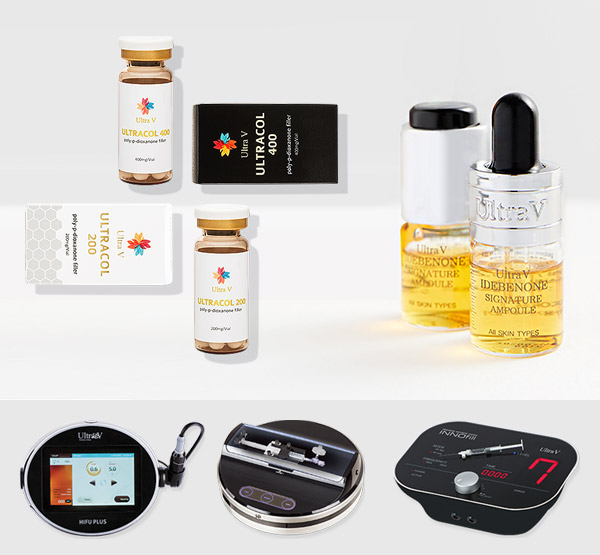 As people get older, their skin tends to droop and wrinkles become deeper. To remedy the problem, they may use the thread lift treatment, in which harmless threads are inserted into the skin to pull the sagging skin. The treatment is effective in facial lifting and wrinkle reduction. When using threads that are not absorbable, patients have to undergo an additional treatment of removing the threads after the wound is healed. What is worse, there might be some side effects like infection around the threads.

Ultra V resolved this shortcoming. In 2012, the company’s absorbable thread or PDO earned the highest level of safety certification of the Korea Food and Drug Administration. At the time, there was no non-surgical lift treatment whatsoever. But the company explored a new market of the “PDO thread lift” that helps make the skin younger without surgical procedures. The company continued to develop technology and make new products. For example, the results of its new absorbable threads last for two years— the first of its kind in the world.

Mr. Kwon, who is a medical doctor himself, was eager to make these new attempts. Outside Korea, he is known more commonly as “Dr. Kwon of Ultra V.” This world-renowned anti-aging expert has also developed antioxidant cosmetics products.

Ultra V is the first company that promoted an antioxidant called idebenone among the general public. It is well known that vitamin C is a key component of many skin-brightening and antioxidant cosmetics products. Idebenone is known to be four times more powerful than vitamin C. Then, what would you choose between the two? Needless to say, you would choose the better one.

Some clinics have carried out idebenone treatment for brighter facial skin and antioxidant effects. But we used it for a cosmetics product for the first time.

In fact, cosmetics containing this substance are difficult to be absorbed into the skin for various reasons. After conducting extensive research for over a year, we found a way to boost its absorption and patented a new product. Thanks to the product’s amazing antioxidant effects, it has been well received in the market for the last three years.

Idebenone is a more highly rated antioxidant agent than vitamin C and coenzyme Q10. It is the most powerful antioxidant with an Environmental Protection Factor or EPF of 95. But it was rather challenging to apply it to cosmetics because it is easily destroyed by light, oxygen or water. But Ultra V was able to overcome the technological limitations through consistent research and successfully developed an ampoule of high concentrated idebenone. Called a “Topical Botox,” the idebenone ampoule has drawn an enthusiastic response in the market.

Since we launched the ampoule on November 30th, 2016, it has sold out on local home shopping channels as many as 68 times. In 2017, it ranked first in the Beauty category in Lotte Home Shopping, in terms of sales. It also came in first in the Ampoule and Beauty categories in 2018 and 2019, respectively, meaning that it was the No.1 item in beauty products overall. The number of repurchases has also surpassed 80-thousand. In January of this year, we signed a memorandum of understanding with Guangdong Sunwah Fonwin Business Management in China. So we anticipate more sales in China this year.

Currently, many patients use our products at hospitals or homes after treatment. I imagine they compared our products to famous ones produced by large companies beforehand. Their choice of Ultra V shows that they are quite satisfied with the products, although it is a small company.

An ampoule used by professional dermatologists became available as a cosmetics product, and the news spread quickly through word of mouth. Not surprisingly, the product continued to sell out.

As the Seoul Award Brand recognized by the Seoul Business Agency, the product has also enjoyed tremendous popularity in overseas markets as well. Ultra V received the 1-million dollar and 3-million dollar export tower awards in 2016 and 2017, respectively, demonstrating its brilliant performance in international markets. On a more positive note, the biomedical firm has developed a brand new product, which will surely contribute to its successful business down the road.

We’ve succeeded in making dissolvable PDO threads in the form of powder. Sprinkling the powder on the face generates the same effect of thread lifts. We’ve patented this PDO polymer filler for the first time in the world. The upgraded product is drawing an explosive response from foreign consumers, as it is very simple to use but creates wonderful effects. Using this product, doctors don’t have to endure the inconvenience of inserting threads into the skin several times. Its sales have begun to rise in Vietnam, Thailand and Hong Kong.

My goal is to develop Ultra V into a leading global beauty firm and promote Korean beauty and made-in-Korea products worldwide so my company can lay the groundwork for other Korean firms to expand their presence in the global beauty and cosmetics market.

As an industry leader, Ultra V has constantly unveiled new materials and innovative products to spearhead K-beauty in the global market.