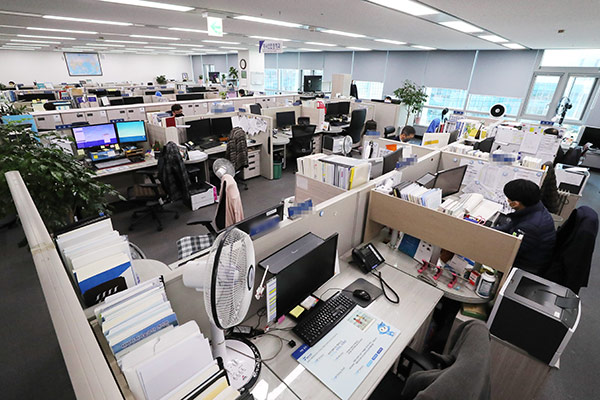 The COVID-19 outbreak is changing the workplace landscape in Korea. An increasing number of companies are allowing their employees to work from home to prevent the further spread of the virus. While there have been growing calls for introducing the “smart work” system, South Korea has yet to fully adopt the new way of working. Attention is drawn to whether it will take firm root in the midst of the COVID-19 pandemic. Here is Lee In-chul, director of the Real Good Economic Institute, with more.

A major change is being perceived in the working environment. An increasing number of employees work from home—a scene that was once believed to be found only in Silicon Valley. Thanks to the development of information technology, remote work is spreading throughout South Korea. The nation’s top ten companies as well as IT firms are accepting this work-at-home model out of concerns over the virus spread. In the hardest hit areas of the virus, Daegu and the surrounding province of North Gyeongsang Province, many public servants are staying at home to work. I’d assume the number of those working from home across the nation would have the population of a small city. This phenomenon did not occur even during the previous outbreaks of infectious diseases like H1N1 and MERS in Korea. Some predict that the ongoing experiment of remote work will prompt the nation’s corporate culture to evolve.

In “smart work,” people can work outside the office by using IT, regardless of time and location. This type of work was mostly introduced in state-run companies in South Korea in the 2010s. In 2012, a smart work promotion bill was proposed to the National Assembly with the purpose of lifting the country’s chronically low birthrate and generating new jobs.

But in South Korea, many office workers prefer to have meetings in person, stressing the value of face-to-face interactions. Moreover, easy access to mass transportation allows people to commute to work conveniently. Therefore, working in the same space is considered efficient. For these reasons, “smart work” has not become common in South Korea.

Now, however, with the COVID-19 outbreak many firms are choosing the remote work system.

South Korea reported the first confirmed case of COVID-19 on January 20, and it is still struggling to contain the virus. During that time, a growing number of companies have let their employees work from home.

SK Group is the first major company to do so on February 25th. The group’s decision-making body decided to extend the remote work period until the end of March. Hanwha Group has also introduced teleworking systems. In addition, Hyundai Motor Group, Lotte, affiliates of CJ Group, liquor-maker Hitejinro and food-production companies Nongshim and Samyang Foods have adopted remote work or the alternate-day telecommuting system.

The purpose, of course, is to reduce the number of workers coming into the office and to join the so-called “social distancing” campaign.

While large companies have introduced the work-at-home system to help prevent the spread of the virus, smart work is now used as an opportunity to experiment with “digital transformation,” which is one of the hot topics of the Fourth Industrial Revolution. In fact, most IT firms and large companies are equipped with infrastructure for remote operations. Employees can use an integrated collaboration tool that features emails, corporate mobile messenger apps and file sharing to give a progress report of both work and exchange information.

Artificial intelligence or AI is also contributing to the acceleration of smart work.

AI is being used to perform simple and repetitive work. Hancom, an IT group in South Korea, provides a free AI call center system known as “AI Check25.” In this outbound call system, a monitor checks the heath conditions of self-quarantined citizens. It asks the citizens if they have symptoms like fever or coughing, and they give yes or no answers. Based on the answers, the system immediately makes data, compiles statistics and analyzes them. It can make calls to multiple individuals at the same time, so it can monitor a large number of people. There’s no need to worry about the shortage of counselors or a heavy workload. I believe an AI solution like this will contribute to arranging a system to respond efficiently to any disasters or infectious disease outbreaks, other than COVID-19.

Last year, auto parts-maker Hyundai Mobis introduced an AI chat robot capable of communicating with employees in everyday language. The robot stores 10 million in-house documents, which can be easily looked up by workers at home. South Korea’s leading steelmaker POSCO is spurring efforts toward factory automation by installing a smart system in its steel factory. For example, it applied AI technology to its blast furnace.

The problem is that some companies are fortunate enough to implement smart work easily, while others are not, depending on the size and type of business.

Large companies in South Korea are rushing to introduce the remote work system, but most manufacturers maintain the old practice. Workers of Samsung Electronics, for instance, still come to the office to work. Also, small-and mid-sized firms that can’t afford to invest in IT infrastructure find it impossible to let their employees work from home. For those firms, remote work is simply out of reach in terms of costs. To address the problem, the government is simplifying the process of supporting labor expenses for small businesses planning on adopting remote work or allowing flexible working hours.

A survey by a local job portal site shows that 40.5 percent of companies polled have implemented the work-at-home system or plan on doing so in an effort to prevent the spread of COVID-19. That is, more than half of businesses are reluctant to pay the costs needed to introduce the smart work system.

By sector, those working at service industries like financial and insurance firms may work from home. But that’s not the case with employees in manufacturing, construction and machinery industries, as they mostly do their jobs at their workplaces. People engaging in R&D jobs also find it difficult to work from home due to security and equipment reasons.

Some analysts are concerned about the side effects of smart work. People may have to work longer just because they work outside the office. Smart work could justify restructuring, as those working from home might be regarded as surplus labor. In other words, smart work could backfire, if it is implemented improperly. Addressing the shortcomings is becoming an urgent task.

In the mid-and long-term, South Korea should create a smart working environment. Businesses can save various costs, including rental costs for their offices. Workers, for their part, can reduce their commuting hours and relieve stress from interactions with co-workers at the office. But smart work is still at the experimental stage. The government needs to provide institutional support for building remote work infrastructure.

The COVID-19 outbreak is changing the way people work and their perceptions about work. The virus crisis could provide an opportunity to facilitate smart work, if legal, institutional and technological support is guaranteed.