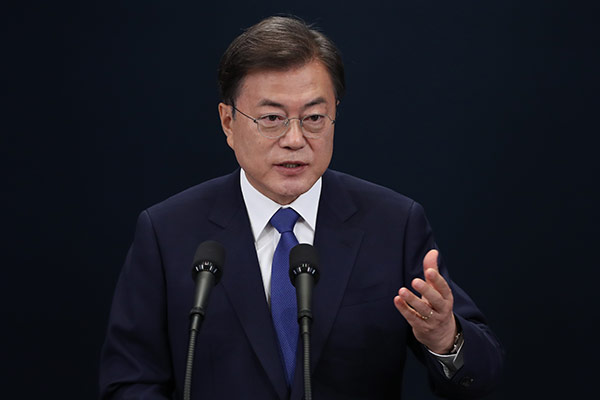 South Korean President Moon Jae-in says that his government will lay the foundation for a universal employment insurance system to cover all working people. Here is Lee In-chul, director of the Real Good Economic Institute, to discuss what the system is and why the government is pushing for this scheme at this point in time.

In his special address marking the third anniversary of his inauguration on May 10, President Moon said that the government would expand employment insurance coverage in phases to all workers.

While health insurance covers all citizens, employment insurance does not. In fact, many workers are in a “blind spot” in the job insurance system.

That’s why Moon has pledged to expand the application of this insurance significantly by implementing an employment support policy for all citizens to raise the country’s labor safety net to a higher level.

As of March this year, about 13.78 million workers or 49.6 percent of the 27.78 million working population in South Korea had employment insurance coverage. That means less than half of the total working people are enrolled in the insurance program. The recent proposal to expand insurance coverage to all workers is seen as a move to protect those in particular types of employment, as they have been hit harder by the COVID-19 crisis but are not covered by the insurance program.

The universal employment insurance scheme is aimed at having more workers insured against unemployment by broadening the labor safety net. The problem is how to finance the plan.

The employment insurance fund has been in deficit for two consecutive years since 2018, with a loss of over 2 trillion won or roughly 2 billion US dollars last year. With 6 trillion won reserved now, the fund may dry up within the year.

More than half of the new subscribers to the program will be non-regular workers who are vulnerable to a crisis, therefore, prone to unemployment. A rise in unemployment benefits applications will increase the deficit of the insurance fund. It may raise insurance premiums for regular workers or existing subscribers, who will consider the situation unfair. And the government will have to spend more on the program.

For stable employment, all workers should be covered by the insurance system. However, the fiscal burden is a major problem to resolve. In the aftermath of the COVID-19 epidemic, many workers have lost their jobs. As a result, nearly 1 trillion won, or about 820 million US dollars were paid out in unemployment benefits last month. The new subscriptions of the self-employed, those in special employment and non-regular workers who have a higher risk of unemployment will aggravate the deficit of the fund that has already been struggling.

The universal employment insurance system will also set off a debate over who should pay the premiums for those vulnerable workers and how.

Golf caddies, designated drivers, tutors, delivery workers and insurance planners all belong to those in special employment. As of October 2018, the number of such workers reached 2.2 million, accounting for 8.2 percent of all employed people. If those people are covered by the employment insurance, the issue of how to set premium rates will emerge. Including the self-employed in the program is also a problem. At present, self-employed people are a mere 0.2 percent of the subscribers of the insurance. Under the current system, enrolling in employment insurance means the automatic subscription of the other three social insurance programs. Of course, this will increase the burden of the self-employed. For fair payments, it is necessary to first figure out potential subscribers’ income and to calculate insurance premiums based on that income. It is not an easy job, though.

Currently, employment insurance premiums are calculated based on employees’ wages paid by employers. It is easy to figure out the amount of wages and it is also simple to collect premiums. But in the case of the uninsured self-employed, platform workers, freelancers and artists, it is not easy to assess how much they earn. After all, it is difficult to introduce universal employment insurance without overhauling the relevant system. What about are the situations like in other countries?

Countries around the world have sought to get more workers insured against unemployment. Amid the prolonged COVID-19 crisis, it is becoming more urgent to secure a safety net for an increasing number of one-person businesses or workers who are not hired by any company. European countries, in particular, are trying to include many more workers in the employment safety net.

France might serve as a role model for South Korea. Previously, employers and workers in France paid the premiums for the employment insurance together in a program similar to South Korea. But the system was abolished in 2018. Now, only employers contribute to the employment insurance plan, and social security contributions are used to substitute for employees’ payments. In Germany, there are two types of unemployment benefits. First, the system is funded by both employer and employee contributions. Then it is funded by taxes. All workers may receive a certain amount of unemployment allowance for an indefinite period of time. Denmark adopts a tax-based employment insurance system that applies to all citizens with income. For South Korea, analysts point out the need to simplify the relevant system.

Many countries around the world are working hard to resolve the job crisis triggered by the COVID-10 pandemic. South Korea has presented an ambitious vision of a universal employment insurance plan. It will be necessary to come up with proper solutions step by step and give concrete shape to job protection measures one after another.