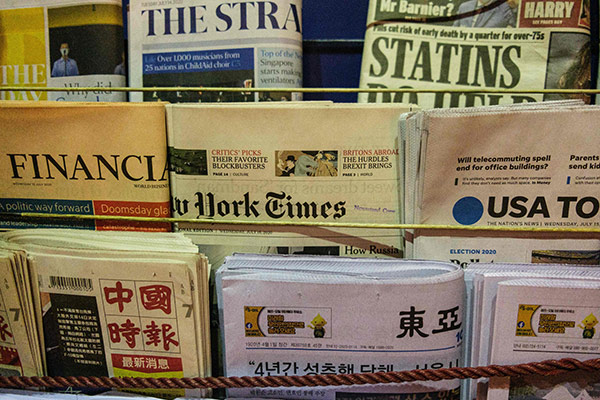 Hong Kong has served for decades as an Asian financial hub and also headquarters for English-language media outlets, thanks to the city’s openness to foreign companies and proximity to the Chinese mainland. However, following the enactment of a new national security law early this month and growing political unrest in Hong Kong, global firms are considering an exit from the former British colony. Now, Asian cities are in a heated competition to take over Hong Kong’s position as Asia’s economic hub.

Here is economic commentator Chung Chul-jin to discuss how the post-Hong Kong era will unfold and how South Korea is preparing for the new development.

More and more companies are considering leaving Hong Kong, and this “Hong Kong exodus” is expected to accelerate further. Currently, more than 1,500 global firms are based in Hong Kong, with U.S. companies accounting for 18 to 20 percent. They will decide to leave, if they can no longer receive the benefits they have enjoyed. This will inevitably damage the city’s role as a leading financial hub in Asia.

Office rental fees in key business districts in Hong Kong have already shown signs of fluctuating. Without any meaningful improvement in relations between the U.S. and China, Hong Kong may lose its regional business hub status. It will result in an outflow of more capital and personnel from Hong Kong and prompt more firms to reduce their operations there.

As of late, social networking sites have found many postings reminiscing about the good old days of Hong Kong. It seems Hong Kong’s status as Asia’s premier financial hub may fade into history.

Someone’s crisis could be others’ opportunity. Asian cities are poised for another take-off, taking advantage of Hong Kong’s troubles. Their fierce competition to assume Hong Kong’s role has already begun.

Several Asian cities are rushing to attract foreign capital and firms exiting Hong Kong. Singapore is picked as the biggest beneficiary, as expected. Singapore’s language, weather and environment are similar to those of Hong Kong. According to the Monetary Authority of Singapore, non-resident deposits soared 44 percent in April, the highest level since 1991 when relevant records began.

It is easy to imagine that people from Hong Kong brought money to Singapore when they moved there. Taiwan is also keen to lure companies from Hong Kong. Analysts predict that many U.S. financial firms will prefer Taiwan to Singapore. Japan is another enthusiastic contender. Japanese Prime Minister Shinzo Abe has openly highlighted Tokyo’s attractiveness as a financial center in a bid to take Hong Kong’s hub title. China also has its own plans. It actively promotes Shanghai and Shenzhen, easing regulations there. Companies are said to show great interest in the Chinese cities.

Some have their eye on the South Korean capital of Seoul as an alternative to possibly replace Hong Kong. Editors and reporters of the New York Times at the Hong Kong office have begun to check real estate prices as well as traffic and leisure environments in some districts in Seoul, such as Gangnam and Itaewon. That came after the New York Times announced on July 14 that it would relocate one-third of its Hong Kong-based digital news team of journalists to Seoul. The Times explained that it examined Tokyo, Bangkok and Singapore, other than Seoul, as candidate cities. Still, Seoul proved attractive for its friendliness to foreign business and independent press as well as its central role in major Asian news stories.

So, will the New York Times’ plan encourage other global firms in Hong Kong to relocate their staff to Seoul? Commentator Chung explains how the South Korean government perceives the ongoing race among Asian countries to replace Hong Kong.

At present, the Korean government is not very active in drawing foreign firms leaving Hong Kong. Many experts say that Korea should attract an enormous amount of money flowing out of Hong Kong through deregulation and tax benefits. But the government has yet to announce any plan officially.

In fact, Seoul and Busan have sought to become Asia’s financial hub since the early 2000s. But the initiative has failed to show any visible result so far. On a more disturbing note, many foreign financial companies have left the country during the period.

Japan and Taiwan are actively easing regulations in an effort to grow into a business hub in Asia. Analysts point out that South Korea, in contrast, remains rather passive. Actually, Korea lags behind in the post-Hong Kong competition. Seoul ranked 33rd in this year’s Global Financial Centers Index, plunging from 6th in 2015. It is a shame that Seoul, among the post-Hong Kong candidates, is not considered a very attractive option.

What are Hong Kong’s strong points and benefits? Why have companies and money flocked into Hong Kong thus far? One of the benefits offered by Hong Kong is that local people speak English, the language of international finance and commerce. South Korea, on the other hand, is a non-English speaking country. On top of that, South Korea has always been influenced by North Korea-related issues.

There has been no war on the Korean Peninsula for decades, and South Koreans believe that they live in peace. Still, from foreign investors’ point of view, any slightest chance of military provocations or war is a grave risk. Also, South Korea still has too many regulations. If the government eases regulations for foreign companies, local firms will complain that they are discriminated against.

Like South Korea, other candidates have both merits and demerits. Singapore has a favorable financial environment similar to Hong Kong’s, while Taiwan’s industry is closely related to China’s. Despite the advantages, stock markets in both Singapore and Taiwan are much smaller than those of Hong Kong. Japan’s stock market is large enough, but it lacks an English-speaking environment and is prone to natural disasters.

South Korea needs to come up with a smart strategy by maximizing its strengths and complementing its shortcomings.

South Korea should first decide whether to join the race to attract firms and capital exiting Hong Kong. If it decides to join the competition, it should improve an environment in a way that English is commonly used. It could set up international schools and hospitals, for example.

Apart from the North Korean issues, South Korea should boost its deregulatory efforts to attract more foreign specialists in the legal and financial sectors, including lawyers and accountants, to make itself more attractive as a financial hub. Most of all, it is necessary to have concrete plans and agendas in place at the governmental level, rather than drawing a few particular companies from Hong Kong.

Experts point out the need that Seoul should capitalize on its own advantage, namely, cultural attractiveness, which other rivals do not have. As a city of rich cultural content including Oscar-winning film “Parasite” and K-pop super band BTS, Seoul could attract tourists hoping for cultural experience and companies pursuing creativity. Attention is drawn to whether Seoul will be able to grab the opportunity to raise its profile as Asia’s financial hub.