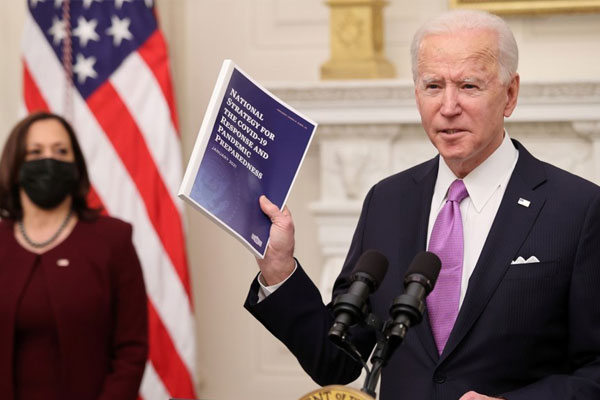 Joe Biden has been sworn in as the 46th president of the United States. The leadership change in the U.S. will certainly have a great influence on international order. It is assumed that the Biden government’s economic policy will focus on reviving the economy domestically and reestablishing the trade order globally through cooperation with allies. The new U.S. administration is also expected to seek to restore its global leadership through international organizations, including the World Trade Organization. Accordingly, a change is anticipated in the global value chain in East Asia.

Here is Korea Development Institute researcher Song Yeong-kwan to examine how Korea should respond to a new trade environment.

In an article Biden wrote for the magazine Foreign Affairs last spring, we can find four major points in his trade policy. First, the U.S., under the Biden presidency, is expected to pursue multilateralism and conform to international rules. Second, the U.S. will require stricter labor and environmental standards in trade agreements. Third, it will strengthen America’s global value chain.

And lastly, it will continue to take a hard-line stance against China. The first three parts show a sharp departure from Trump’s trade policy, while the last one is similar to Trump’s.

Right after his inauguration, Biden signed executive orders rejoining the Paris Climate Agreement and halting the U.S.’s withdrawal from the World Health Organization. In doing so, he began to reverse some of the policies of former president Donald Trump.

But the Biden administration is likely to continue a hard-line approach to China. A deepening conflict between the U.S. and China may lead to a change in the global value chain in East Asia.

Biden’s trade policy will influence the Korean economy in many ways. One of the most notable parts will be a change in the global value chain or GVC in East Asia. Intermediate goods and foreign investment comprise important elements of the GVC. For instance, iPhones are not produced directly by Apple. Rather, Foxconn, a Taiwan-based company, produces them in its factory in China. Among 1,000 parts needed for production, some are produced in the Chinese factory and some others are imported from South Korea and Japan.

The finished products are exported to countries around the world, including the U.S.  So, iPhone production involves Taiwan, China, South Korea and Japan to create the global value chain. The GVC is highly developed, especially for the electronics industry, in East Asia. Korea depends heavily on the GVC for its semiconductor exports. In this regional GVC, China’s role is expected to be reduced in the future.

China’s presence in the GVC in East Asia has already been declining as China’s growth strategy is now aimed more at domestic consumption than outbound shipments.

The structural change in the Chinese economy is leading to a contraction in trade, contributing to loosening the existing value chain in East Asia.

The Comprehensive and Progressive Agreement for Trans-Pacific Partnership, known as CPTPP, is considered to be another factor that may affect the GVC in East Asia. The Japan-led trade pact entered into force in December 2018. It is based on the Trans-Pacific Partnership, which was led by the U.S. under the Obama administration with the purpose of creating a new, U.S.-centered trading bloc and keeping China in check.

The CPTPP consists of eleven countries, including Japan, Vietnam, Canada, Australia and New Zealand. What differentiates this multilateral trade pact from other free trade agreements is that the CPTPP rules of origin apply the concept of full cumulation.

Let’s suppose that a Canadian company set up a factory in Vietnam. The factory may import parts from Japan or Korea, produce goods and export them to a CPTPP member. If the factory imports parts from Japan, which is a signatory to the trade agreement, the parts are entitled to preferential tariff treatment. So, the products using the parts receive the same benefit when exported to the CPTPP member state.

However, Korean parts are not eligible for the preferential tariff treatment since it is not a member of the CPTPP. As a result, the factory will prefer Japanese parts to Korean ones, even though the parts from the two countries are the same in terms of quality and price. The origin requirements may create a new global value chain among CPTPP members.

Analysts point out that the change in the GVC in East Asia could be both a risk and an opportunity for the Korean economy, which relies heavily on China for trade.

China’s smaller presence in the regional GVC will have a negative impact on the growth of Korea’s major industries such as electronics, chemicals and vehicle parts. On the flip side, though, the emergence of a new GVC among the members of the Association of Southeast Asian Nations could be an opportunity for Korea to explore another market.

The Korea Development Institute or KDI says that Korea should join the CPTPP quickly to reduce the risk factor and grab the opportunity.

South Korea’s trade dependence on China remains at a high level, as China alone accounts for nearly one-fourth of Korea’s total exports. That means China’s restriction on imports from South Korea, if executed, will have a major impact on the Korean economy. However, if Korea joins the CPTPP, it can diversify its export destinations. Korea’s CPTPP membership will brighten the export prospects, particularly for small-and mid-sized firms, which mostly produce intermediate goods.

The KDI believes that Korea doesn’t need to worry much about some problems that might arise from joining the CPTPP, including market opening and fisheries subsidies. Although the trade pact requires a high level of market liberalization, the level is similar to that of free trade agreements Korea has already signed. Also, of the CPTPP members, Mexico is the only country that Korea does not ink an FTA with. Therefore, even if the CPTPP takes effect, its negative impact will be limited, even in the sensitive areas of agriculture and food.

The KDI has also raised the need for attracting foreign direct investment. The Biden government’s greater pressure on China may prompt foreign investment to leave China, and Korea should consider ways to bring in that money. Of course, it is necessary to protect vulnerable groups in the process of trade liberalization.

Promoting trade liberalization will benefit many areas, but may also hurt some others. Partly for that reason, Korea has been passive about tariff abolition. But I think it’s time to deal with the potential damage by carrying out welfare policies, not by maintaining the tariff barrier.

Relevant welfare policies include the Trade Adjustment Assistance system and the Public-Purpose Direct Payment Program. The former is for the service industry and businesses, while the latter is for the agricultural sector. In the first policy, it’s necessary to reduce support for nonviable companies to be liquidated and increase support for workers instead. The government also needs to implement the second policy effectively. This is to help farming households maintain their income and improve the competitiveness of the agricultural industry.

The Trump era is gone and the Biden era has arrived in the U.S. It means a departure from unilateralism and the opening of an era that seeks predictable and universal values. This is considered a positive development for Korea, which has a high level of dependence on trade.

But a possible change in the GVC in East Asia poses uncertainties to Korea’s exports, the country’s major growth engine. Korea needs to devise a strategy to preemptively respond to a new trade environment in the Biden era and use the change as an opportunity.