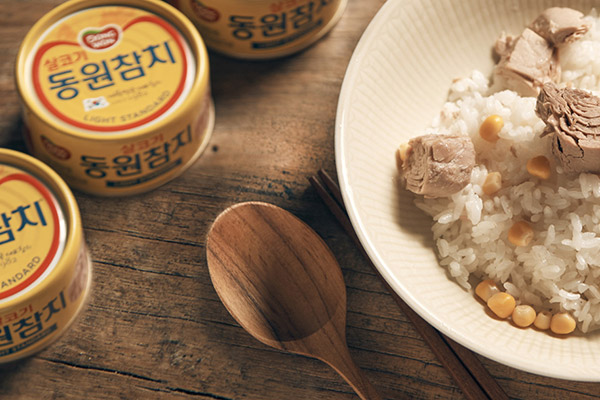 In a speech marking the group's 50th founding anniversary, Chairman Kim Jae-chul called for the continuation of principle-based corporate operations to generate profit, pay taxes and create jobs to contribute to the country and people's lives. Kim was famous for hauling in big catches. His nickname was Captain J. C. Kim. In his mid-30s in 1969, he founded Dongwon Industries with ten million won in capital.

The name Dongwon carries high hopes to reach all of Korea and the entire world. Fitting to the name, Dongwon Group is now an active player on the world stage with expanded business areas. It originally started out in deep sea fisheries but has now branched out to diverse fields such as food, packaging and logistics. Since 2000, it has also established a founding company and thereby improved the expertise and managerial capacity of its subsidiaries. By also securing overseas branches, it has truly become a global enterprise.

Last month, Dongwon Group held a ceremony marking its 50th founding anniversary. The company looked back on its history of growth as it started out as a small fisheries firm in 1969 with just a single deep sea fishing boat.

Now it stands as a global powerhouse with business in four main areas: fisheries, food, packaging and logistics. But surprising news also came out this day.

Chairman Kim Jae-chul, the very person behind the group's existence for half a century, announced his retirement. It's rare to witness a founder of a corporate group voluntarily step down from the helm. His 50 year voyage has come to an end. But how did it begin? His ties with the sea trace back to his very first sail.

Kim took his high school teacher's advice to heart that the future of Korea lies in the sea. He turned down a scholarship enrollment opportunity with Seoul National University and instead entered a fisheries school which is now Pukyong National University. In his graduating year in 1958, he heard that Korea's very first deep sea fishing vessel, named "Jinam", was departing to set sail. He did the best he could to get on that boat at age 23 as a training sailor. As a condition, he even signed a release form indicating he is aware of the risks of losing his life. In just 3 years, Captain J. C. Kim became the country's youngest sea captain and in the decade thereafter, he voyaged around the world, gaining fame for his big catches.

Kim chose the sailor life from early on and began his trainee years on the vessel Jinam, Korea's very first deep-sea fishing boat. He was young, but was the only person on board with knowledge on deep sea fisheries. He knew what fishing could be profitable. Armed with such knowledge, he became captain in 3 years and garnered a reputation as the most prolific tuna catching captain.

He literally became a brand in the world fisheries world. And in 1969, he founded Dongwon Industries. What started out with 3 employees and one boat went on to post 1.2 million dollars in exports in the first year thanks to Kim's self-developed fishing techniques and knowhow. But the firm faced a crisis in its 4th year when the oil crisis of 1973 hit the world, causing oil prices to skyrocket. In this moment of crisis, Dongwon chose to embrace the challenge.

Turning crisis into opportunity is in the corporate DNA of Dongwon. It started out small but it quickly grew by charting out new fishing grounds and introducing new technology. The two oil shocks in 1973 and '79 were desperate times for the fisheries business. But Dongwon, made aggressive investments and tried to create opportunity during times of crisis. In 1979, it acquired a second hand seine tuna fishing boat that had a helicopter on deck, the Costa de Marfil.

The vessel cost 3.2 million dollars - a huge sum and a risky purchase. It was a gamble. But Dongwon firmly believed that seine fishing was the way forward and made this transition ahead of others. Aiming high has always been the driving force behind Dongwon’s growth.

Higher oil costs were a big blow to the deep sea fishing community, but Dongwon used this critical period of time to take over a tuna purse seiner. Seine fishing can haul in a large catch in a short time, but requires advanced skills, and success can't be guaranteed.

Dongwon looked to the future and made a bold investment. It trail blazed towards new fishing grounds and adopted the latest technology, and these efforts paid off as Dongwon rose to become the number one fisheries firm in Korea. It then went on to open a very significant new chapter in the company’s history, namely canned tuna.

Probably the single most important event in Dongwon's history would be the launch of Dongwon canned tuna, which later became a household name. Dongwon was the first in the country to market canned tuna meat in 1982. In those days, canned tuna was considered to be marketable only in advanced nations and to have little commercial value in countries where per national income was below 2,000 dollars. But when it first came out in Korea, it drew attention as a decent protein source that was cheaper than beef and pork. To overcome the high-end image of tuna, Dongwon exerted efforts to promote tuna as an accessible ingredient that can be used in various everyday dishes such as kimchi stew, rice rolls and sandwiches. Tuna gradually became a regular part of the Korean diet.

When protein consumption was a tall order back in the days, Dongwon aspired to make quality protein available to consumers. In 1982, the company made this come true in the form of the now ubiquitous canned tuna. However it was a novelty then.

To familiarize the new product with the market, employees went out to crowded areas on weekends and holidays and held tasting events. They gave out samples of tuna kimchi stew. Thanks to the efforts in those early days, Dongwon tuna is now a virtual staple commodity, having sold more than 6.2 billion cans.

During the Asian financial crisis in 1997, Dongwon diversified its business portfolio and, during the so-called Great Recession in 2008, in another bold move, it purchased the largest U.S. tuna brand, StarKist. A pattern emerges: taking risks during times of difficulties. Kim Il-gyu again explains.

To give an example, Dongwon once constructed a 45-hundred ton vessel, recruited more workers and then bought the U.S. brand StarKist - these actions all occurred during rather bad times for the business or industry. Dongwon’s gung-ho spirit has led the company to success time and time again, and continues to be the driving force behind Dongwon’s growth. The company will not cease to sharpen its competitiveness in the global fisheries market.

Dongwon Group started out with ten million won in capital but is now posting annual sales of over seven trillion won. It has also been running a scholarship foundation for 40 years that was set up with chairman Kim's own funds. In its 50th year, the fisheries conglomerate is embarking on a voyage towards the next half-century and beyond.