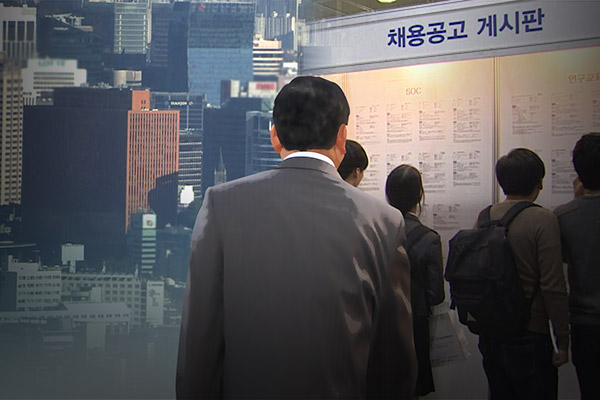 Economy and Finance Minister Hong Nam-ki has recently sparked debate after he said that it’s time to discuss raising the retirement age, currently set at 60. The finance chief also said that the government would announce its position on this issue within this month. Here is Choi Bae-geun, professor of economics at Konkuk University, to discuss a possible rise in the maximum working age. Professor Choi explains why the government has brought up this issue.

A rapid demographic change is taking place in Korea. The under-50 population is falling, while a population of elders over 50 is rising. The population aged 60 or older is set to increase by 540-thousand each year, while the number of those between 15 and 49 is expected to decrease by an annual average of 340-thousand. That means the working population is shrinking and the number of retirees is increasing fast.

The situation will worsen further, with the rising number of baby boomers, born between 1955 and 1964, entering retirement. This year, those born in 1959 turn 60, the statuary retirement age, and the retirement of baby boomers will continue in the next five years. The chronically low birthrate and the soaring number of senior citizens who have stopped working will inevitably put a heavier burden on society.

The extremely low birthrate and the rapidly aging population are dealing a blow to Korean society faster than expected. The working-age population, which began to decline for the first time two years ago, is estimated to plunge by 200-thousand every year from 2020 to 2023. After 2025, the decrease will double. The drastic drop in the number of people in the labor force is attributable to a surge in the elderly population of those 65 years or older and a sharp decline in the number of children under 14. Such a rapid contraction of the economically-active population and the rising number of older people will lead to snowballing financial burden. Also, retirees are reluctant to spend money, contributing to sluggish domestic consumption.

In this situation, keeping more people in their late age in the workforce is expected to have some positive effects on society.

If people work longer, pension payouts will be postponed as well, considerably reducing the government’s financial burden of looking after the elderly. A higher retirement age can also make up for the expected shortage of workers amid the falling working-age population.

If the problem of the ever-increasing number of elderly people is left unattended, it will have a negative impact on financial markets as well. Senior citizens tend to manage their assets safely and stably so they will likely invest more in bonds than in stocks. Decreasing demand for stocks may weaken vitality in the local stock market.

Letting people work longer than the current retirement age will, therefore, help ease the social and economic burden and may also make them feel happier and stay healthy. In this respect, I think extending the retirement age is an inevitable trend.

At present, every 100 working-age people between 15 and 64 have to support 20.4 people who are over 65. If the retirement age is pushed up to 65 from the current 60, the ratio will be lowered to 13.1, meaning the burden on the future generation will be eased. If older people continue to engage in economic activities, they will earn more and spend more, resulting in an increase in the nation’s tax revenues. Due to these benefits, major economies around the world have already extended their retirement age.

Northern European countries have gradually increased their retirement ages, considering that a sharp retirement age hike will come as a shock to society. The U.S. and Britain have no standard retirement age. They abolished it in the 1980s in light of the elimination of age discrimination, but companies in these countries are given more autonomy in employment and layoffs. Germany has decided to extend its retirement age from 65 to 67.

The case of Japan may offer a lesson to Korea, as the former experienced a low birthrate and aging population earlier. In 2013, Japan revised the law to allow employees to work until 65 if they wish. The Japanese government instead gave companies three options—extension or abolition of the retirement age, or reemployment of contract workers. Companies may choose one of the three options. Whatever they choose, they are required to guarantee the retirement age of 65 in return for using the wage peak system, in which employees get reduced pay for several years before retirement.

But the introduction of the wage peak system requires social consensus. A move to extend the retirement age often causes societal conflict. In particular, a delay in the collection of national pension payouts, in line with a higher retirement age, is expected to generate some adverse effects.

If the retirement age is extended, people may start to take the state pension later than originally scheduled. It should be fine as long as they can work until they reach the annuity-payment age. But if they can’t find employment despite a higher retirement age, and therefore if there is a gap between their actual retirement age and pension-receiving age, they will be unhappy because they have no income during that period. Also, a postponement in pension payments may decrease the total amount of pension they would receive, due to a shorter collection period. Conflict will arise unless the government provides some complementary measures.

In the case of France and Russia, their decision to extend both the retirement age and the pension-payment age drew strong public backlash.

Most worrisome is generational conflict. Amid the tight job market in Korea, an extended retirement age will discourage companies from hiring new employees and may deepen the “employment conflict” between the young and old generations. Companies, on their part, may have to shoulder more labor costs in the rigid labor market. Moreover, it’s been less than three years since the retirement age was set at the current 60, and many analysts agree that it’s too early to extend the age again. Professor Choi echoes this view, saying that a change should occur at a pace the government can handle.

It would be better to extend the retirement age little by little, like 0.5 or 1 year annually or every two years, rather than lifting it drastically from 60 to 65, to minimize the shock and ease the burden on companies.

Those who are allowed to work longer, for their part, will have to accept the reality that their income and working hours will decrease; compared to before the retirement age was extended.

To ease the controversy surrounding the extension of the legal retirement age, the government is considering making the labor market more flexible and overhauling the wage structure based on workers’ competency and productivity.

The retirement age issue has to do with various welfare programs for older people and rampant youth unemployment. The government should hold more discussions and make thorough preparations before actually implementing the measure in order to reduce generational conflict over employment and welfare.