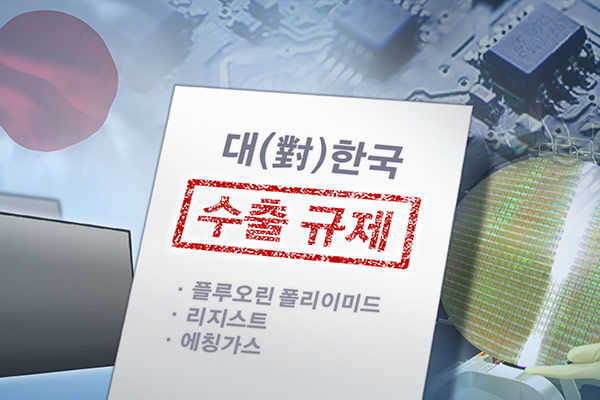 The Japanese government has launched economic retaliation against South Korea. Starting on July 4th, Japan imposed restrictions on exports to Korea of three key materials needed for producing semiconductors. Tokyo is also considering removing Seoul from a so-called “white list” of countries by the end of this month.

Here is Eom Chi-sung(엄치성), head of the International Cooperation Team at the Federation of Korean Industries, to discuss Japan’s export curbs, which are expected to strike a blow on Korean chipmakers.

Japan has taken two drastic measures. First, the Tokyo government announced last week that it would restrict exports to Korea of three essential materials used in semiconductors. Second, it is reviewing excluding Korea from its white list of 27 countries designated as national security allies that have minimal trade restrictions. Japan will hold a public hearing by July 24th to make a final decision.

On July 1st, Japan’s Ministry of Economy, Trade and Industry announced that it would tighten regulations on certain industrial items bound for South Korea. With the new restrictions, which went into effect on July 4th, Japanese manufacturers are required to obtain permission from authorities every time they export three particular items to Korea. The three materials are fluorine polyimide used to make smartphone displays, resist, which is a thin layer that is used to produce the semiconductor substrate, and etching gas, which is needed for chip cleansing. The ministry added that it would collect opinions until July 24th regarding the removal of Korea from the white list of countries that are exempt from export permit applications for high-tech materials. These export restrictions are baffling Korean companies that have been dependent on Japanese manufacturers for semiconductor and display materials.

Korean chipmakers rely heavily on Japan for industrial materials vital for the production of semiconductors. Chips pass through numerous manufacturing processes in the course of production, and each process needs certain materials. Any material disruption in the manufacturing process, as a result of Japan’s export restrictions, may lead to the suspension of chip production altogether.

Japan boasts high-purity hydrogen fluoride, which is used as etching gas in chip-making. Some other countries produce the material, but they fall far short of Japanese ones in terms of purity. For Samsung Electronics in Korea, Japan’s high-purity hydrogen fluoride is essential to produce semiconductors. It is difficult for Korean semiconductor manufacturers to find other foreign alternatives, as Japanese materials, including etching gas, are by far superior to those produced in other countries.

At present, Japan accounts for 70 to 90 percent of the global supplies of those three chemical materials. Japanese manufacturers, as long as they get export approval, have so far been able to send those items to Korea for three years. However, with the abolishment of preferential treatment, the companies must submit necessary documents to authorities whenever they export the materials and get permission on a contract-by-contract basis. The approval process typically takes around 90 days, but it may last even longer if the Japanese government chooses to adjust the period. In extreme cases, Korean companies might not be able to produce semiconductors at all if they run out of the materials in stock. It seems Japan is specifically targeting the semiconductor industry, which has propped up the Korean economy. Mr. Eom explains why Tokyo has taken such a radical measure against Seoul.

Under the current Seoul government, diplomatic conflict between South Korea and Japan has intensified, especially surrounding a dispute over the compensation of colonial-era forced labor. Japan seems to be unhappy about South Korea’s attitude toward dealing with the historical issue. Domestically, it is speculated that Japanese Prime Minister Shinzo Abe is trying to use the export restriction issue to rally his core conservative supporters ahead of the Upper House elections scheduled for July 21st.

The Japanese government explained that the trade restrictions are the result of a loss of trust between the two nations. However, Abe has mentioned sensitive historical issues such as the row over compensation for Korean victims of Japan’s wartime sexual slavery and forced labor, admitting that Tokyo’s latest move is, in effect, an act of economic retaliation. It so happened that Japan began to execute the export restrictions on July 4th, the day when the official campaign for the Upper House elections started, spawning speculation that political calculations lie behind Japan’s export curbs on Korea. In May, Japan proposed an arbitration committee to address the forced wartime labor issue. As South Korea refused the proposal, Japan immediately requested the nomination of members of third-party countries to the committee. Korea is supposed to reply by July 18. If the Seoul government remains silent, Japan may further expand regulations on exports.

Japan may launch a second and third retaliation if the governments of the two countries fail to reach a compromise. For now, some businesses will be hit by the retaliatory economic measure. But if the situation is protracted, Japan may slap high import tariffs on consumer goods from South Korea, just as the U.S. imposed heavy tariffs on Chinese products. Japan could also exploit non-tariff barriers such as lengthy customs clearance procedures and tougher quarantine checks on Korean products. I imagine Tokyo will seek ways to cause much damage to Korea and less damage to Japan. For instance, Japan may limit the number of short-term work visas for Koreans.

The South Korean government has begun to take action of its own. On July 4th, the presidential office in Seoul said that Japan’s export restrictions are a clear violation of international law, calling them an act of economic retaliation. It also said it would actively adopt diplomatic measures, including filing a complaint with the World Trade Organization, to explain Japan’s unfair action to the international community. However, if the current dispute escalates into a full-fledged economic war, Korean firms as well as Japanese companies that export goods to Korea will both suffer.

As always is the case, a trade war, is not a mere zero-sum game but will end up being a minus-sum game. It is a question of which side will be hit harder or which side can hold on longer. It is a very wasteful and undesired fight. South Korea and Japan seem to be engaging in a war of pride. But it is important for Korea to prevent bilateral relations from worsening further. It should start negotiations with Japan quickly and find a way out of this mess.

It is said that American companies follow the 30 percent rule. If a firm depends on a particular country for more than 30 percent of its supplies of certain materials, the firm is considered to have failed to manage business risks properly. In Korea, less than 50 percent of semiconductor parts are made locally. In a sense, Korean chipmakers have failed in risk management. They need to work out more innovations to increase the local production of key components. But businesses can’t fulfill this challenging task alone. The government should cooperate with the corporate sector by providing various supportive measures, including tax benefits for research and development projects.

The Korean government plans to invest 5 trillion won or 4.5 billion US dollars for six years from next year for the research and development of semiconductor materials, parts and equipment. It will be hard to catch up with Japan right away, which is equipped with core technologies. Still, even now, it seems necessary for Korea to make thorough preparations to develop its own basic materials industry. At the same time, the nation should promptly start diplomatic negotiations with Japan to ease their trade conflict.