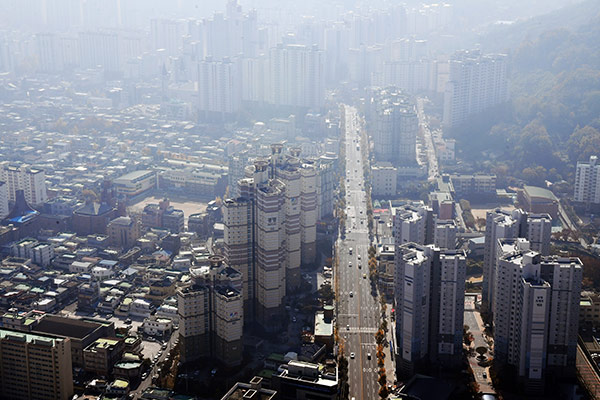 The Korean government recently announced that it will expand price ceilings on preconstruction apartment sales, which are currently imposed on only public land, to privately-owned housing sites.

Under the price cap system, the government sets presale prices based on the price paid by builders for land purchases, basic construction costs and appropriate profits for construction companies.

But problems have arisen in the real estate market, even before the controversial system’s introduction. Here is Park Won-gap, a senior real estate analyst at KB Kookmin Bank, to analyze the current state of Korea’s housing market.

Local construction companies are offering a large number of homes for presale, ahead of the execution of the price cap system. This month, builders are expected to offer 52-thousand new homes for presale nationwide. It is 3.2 times higher than the same period last year and also the second-highest September figure in nearly ten years, following the one in 2015 when the housing market enjoyed a boom.

Amid the rising apartment prices in the Seoul metropolitan area, people are showing an increasing interest in pre-construction sales of apartments. With this in mind, builders seem to be rushing to offer new homes before the presale price ceiling system is implemented.

The supply of new apartments this September is larger than expected, even though the month is typically popular for presales of new homes. Construction companies are expected to parcel out new homes in large numbers before and after the Chuseok holiday, as applications for new apartments are put on hold during the holiday period. Prior to the enforcement of the price cap system, people are scrambling to subscribe to new apartment offerings.

The subscription competition is getting fiercer. The recent competition rate for an apartment complex in the Dongjak District in Seoul posted 203 to 1, with as many as 1,123 people applying for a single apartment unit of 84 square meters. The unbelievably high competition rate means it is almost impossible to buy the new homes.

The competition to win the purchase rights for new apartments has been intense in overcrowded Seoul, but a three-digit competition rate is the first such case in three years. Apparently, many people who hope to buy homes are only interested in the presale housing market.

Presale apartment prices are still high, as the new system has yet to be implemented. However, the presale housing market shows signs of overheating, as an increasing number of people believe that the system will lead to a decline in the housing supply. In addition to pre-construction apartments, existing homes have also seen their prices go up.

Apartment prices in Seoul in August increased at the steepest pace in ten months. According to the Korea Appraisal Board, apartment prices in Seoul rose 0.14 percent in August. It is two times higher than the figure from the previous month and the biggest increase since October of last year. In addition to apartment prices, the cost of standalone and multi-unit houses has been on the rise. Home prices have increased sharply especially in popular residential areas such as the southern Seoul districts of Seocho and Gangnam as well as the Seongdong and Mapo districts.

The price increases are driven by relatively new apartments that have been built within the last five years. As of the last week of August, prices of existing but new apartments rose for the ninth consecutive week, amid expectations that the preconstruction sale price limit will make those apartments even rarer to find. Apartments aged ten years or older are fueling home price hikes. In general, the older the apartments are, the cheaper their prices. However even old apartments, if they are conveniently located and have great amenities, have seen demand grow with their prices increasing 0.03 percent last month.

The government initially predicted that the housing market would decline and stabilize in the second half of the year as a result of its regulations and an increase in the supply of new homes. However, contrary to the government’s expectations, the real estate market is moving in the other direction.

The government expected that the presale price ceiling system would cool down the heated housing market since it would dampen reconstruction projects and result in a drop in the prices of other apartments, while growing interest in the presale housing market would restrain demand for existing apartments.

However, the market perceived the price cap system as a signal of the dwindling home supply, stirring unease among those who actually needed homes. In anticipation of reduced supply, prices of homes that have already been built, whether they are old or new, are showing a rising trend. Even the prices of apartments under reconstruction, which were initially expected to suffer a blow, have not fallen drastically. Since the market is moving in an unexpected direction, some describe the current situation as the paradox of the presale price cap system, which seems to only add to market confusion.

The price controlling of new apartments may calm the overheated market in the short term, but the ill-balanced supply and demand for homes will cause market distortion, since the government cannot suppress demand for excellent infrastructure like good education facilities, amenities and convenient traffic.

Hasty presale home offerings by construction firms, the unusually high competition rate for new apartments and soaring housing prices are some of the side effects of the price cap system. It is obvious that the real estate market is worried about uncertainties after the system goes into effect.

The system was expected to be introduced in early October, but Finance Minister Hong Nam-ki has put a brake on the scheme, revealing a rift within government agencies. The price ceiling system is apparently showing signs of instability, even before its execution. The question is: will the government enforce the plan in October as planned?

The Housing Policy Deliberation Committee, chaired by the minister of Land, Infrastructure and Transport, will select areas where home prices have risen sharply in overheated speculative zones before making a final decision on implementing the price cap system.

I think the government will assess potential effects of the system on the economy more thoroughly and watch the market situation carefully before convening the committee meeting and putting the measure into action.

Hong Nam-ki said that the government will finish arranging an enforcement decree concerning the presale price cap system in early October. Hong noted that it doesn’t mean the government will implement the system right away but that it will decide when to introduce the measure in consideration of the economic and housing transaction situation.

Uncertainties are what the market is most concerned about. In order to avoid market disruption, the government must send a clear signal about when and how to enforce the plan and come up with measures to minimize its side effects.